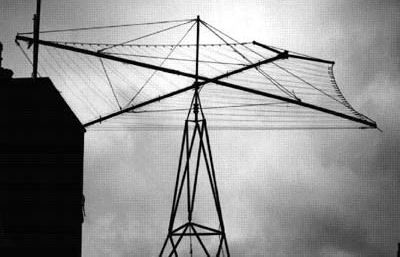 Tune into radio late at night, and you’ll encounter a world that tends not to make itself audible much during daylight hours. There’s the expected cast of characters, like the deep-throated slow jams DJ, or along the same lines, Loveline. In some remote corners, listeners may be haunted by the specters of old-time radio dramas. And for the paranormal spooks and skeptic gawkers, there’s real life X-files talk show, “Coast to Coast.”

Swap the AM or FM bands for shortwave signals, however, and the programming becomes much stranger. Aside from the expected amateur broadcasts and weather and information signals, there are sequences of eerie, disembodied voices chanting sequences of characters, sometimes interspersed with morse code blips, or even more curious, with bits of melody or other sounds. They’re the kind of sonic phantoms that can lead to psychological mischief in the wee hours, and can leave the sort of chilling sensation of having encountered a ghost.

In the early ’90s, Londoner Akin Fernandez, having recently purchased a shortwave radio, found himself growing increasingly drawn in to these broadcasts, jotting down each sequence of numbers, each pattern, time of day, any relevant information, just to try to understand what, exactly, he was listening to. A Washington Post profile from 2004 even goes into detail about how he would sometimes stay up all night recording these station messages in his notebooks. And in 1997, Fernandez finally took that obsession to the illogical level that only an obsessive could — he released a four-disc box of these numbers stations recordings, 150 signals or tracks in total, dubbed The Conet Project.

Fernandez spent years listening to these mysterious stations, and his labors produced four hours worth of material, compiled via his label, Irdial. But to actually listen to four hours worth of numbers sequences, in various languages and varying fidelity, proves to be a strange test of endurance, not just of one’s own tolerance of static, repetition or almost hypnotic incantations, but of the eerie after-effects these recordings can leave. There’s nothing outright alarming about them, most of them anyhow, but just the sheer manner in which these patterns play out can be downright unsettling. Take the box set’s first recording, “The Swedish Rhapsody”: A young girl’s voice reads a sequence of numbers in German, then followed by a recording of an ice cream truck’s music box playing the title melody. It’s, on its face, perfectly innocuous. And yet, the juxtaposition and atmosphere of the whole thing makes it seem completely and utterly twisted. Listen to this in the late hours, when your mind begins to play tricks on you, and you might end up with some unintentionally sleepless nights.

Deeper into the collection, the recordings grow even weirder and eerier. “Phonetic Alphabet Nato” will likely be familiar to most readers; Wilco sampled it on “Poor Places,” the penultimate track on Yankee Hotel Foxtrot (which became the source of a legal battle between the band and Fernandez). In it, a British woman’s voice chants “Yankee… Hotel… Foxtrot” alongside other sequences, like “Group… One… Zero…” as static storms around it. German station “Gong Station Chimes” is dramatically creepier. The chimes in question wobble and ring in a strangely dissonant fashion, not like those of a clocktower, but more like something that could only exist in some dark, post-apocalyptic landscape. And then the counting begins: “ACHTUNG!”

The melody that makes up the intervals in “Two Letter Ys” is erratic, even a little disturbing. A series of recordings titled “High Pitch Polytone” sound like what might accompany a fall into a vortex to another dimension. “Magnetic Fields” features a recording of a Jean Michel Jarre song that, out of context, seems truly strange to say the least. “Faders” is, like its name implies, a series of fading, pitch-shifting tones, which mark one of the most downright skin-crawling moments on the collection. The one track that might send any listener running for the hills, however, is “The Backwards Music Station”; as demonic as some have made backwards-played music out to be in the past, when filtered through heavy doses of static, it’s akin to a recording of opening day in Hell.

As eerie as these recording are on their own, the very idea of numbers stations grows all the more intriguing and potentially troubling given the possible origins of them. The generally accepted belief behind these numbers stations, though the hypotheses behind them are numerous, is that they’re actually coded government messages broadcast to spies. No government has acknowledged this (not exactly, we’ll get to that in a minute), but there is anecdotal evidence to support it, most infamously in the case of Erwin Van Haarlem, a Dutch national posing as a British art dealer, who was arrested in 1988 after being caught receiving transmissions from numbers stations, with one-time pads, used to decrypt the messages, hidden in bars of soap.

The notes that accompany The Conet Project suggest that these numbers stations have been in use since World War I, making them some of the earliest radio broadcasts, historically speaking. But more importantly, these detached, even sometimes innocent sounding recordings, may very well be dictating an order to assassinate, or god only knows what (this is where it sounds like I should be on “Coast to Coast”). One famed station, dubbed “The Lincolnshire Poacher” because of its use of two bars of the titular English folk song, is believed to have been broadcast from a Royal Air Force base in Cyprus, and operated by the British Secret Intelligence Service, or MI6 (you know, the agency whose name Mitt Romney mistakenly spoke aloud). But where a handful of stations may point to more concrete explanations, hundreds, or maybe even thousands of such signals remain an enigma.

The mystery behind it is what makes The Conet Project kind of strangely alluring, and the potential for what it means is possibly even more terrifying than the bizarre music and words that comprise it. However, Fernandez more or less received confirmation, in a sort of dismissive, pay-no-attention-to-the-man-behind-the-curtain manner, after the first issue of The Conet Project.

In a 2004 interview with NPR, Akin Fernandez said that he was contacted by an official from the British Department of Trade and Industry, who said the recordings “are what they think you are,” and not for public consumption. The mystery and secrecy surrounding the recordings only ended up intensifying his curiosity further. As he says in the interview, “When people don’t know what their governments are doing, bad things happen.”

The degree of certainty about where any of The Conet Project‘s recordings are or were broadcast or what they mean is anyone’s guess, and pinning them down is a speculative activity at best. And that’s essentially what makes it so interesting. On the 15th anniversary of its release, we may know a little more about numbers stations, at least theoretically, but it’s still not much. Still, the recordings, bizarre and musical in their own way, provide a listening experience that no other album can provide, and evokes a strange response in the listener, partially because they sound so foreign and unsettling, and partially because they’re such a widespread phenomenon that practically no government in the world is willing to acknowledge. The most effective form of fear is that of the unknown — movies are much scarier when you don’t see what’s coming — and that’s at the heart of The Conet Project. Maybe, when decoded, these recordings wouldn’t seem quite as strange and disturbing as they sound. But that’s a conclusion we’ll likely never reach.