A film is only really as good as its soundtrack. Don’t let that sound any more controversial than it has to be — if one bad actor can ruin a movie, so can misplaced musical cues. Would Rushmore have been the same without its British invasion soundtrack? Would Star Wars have been as powerful with disco? Would No Country For Old Men have been as harrowing with music? These questions don’t have obvious answers, but we’re leaning toward no.

This weekend, the Motion Picture Academy will hand out more shiny statues to actors, directors, writers, musicians and composers, and very likely nothing surprising will happen. And looking back over the years, when it comes to original scores, the Academy almost always plays it safe (or boots out a nominee based on a technicality — *cough* The Godfather *cough*), even though the film scores we tend to remember most vividly are the ones that took the most risks. Film music has shaped the way we listen to music and hear it, opening us up to experimental techniques and textural innovation. But what makes a great film score? For one, it has to be memorable. For another, it has to pull you deeper into what happens on screen. And most importantly, it has to be equally compelling, if not sometimes more so, as the film itself.

In the past we’ve celebrated our favorite songs from films (and single-artist soundtracks), and this list compiles our 40 favorite original (instrumental) scores. Cue them up and hear the magic unfold. 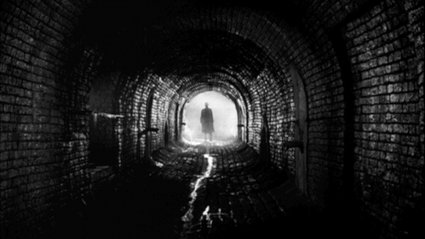 Film noir is generally characterized by darkly cool jazz or string soundtracks, but Carol Reed offered a striking variation for his 1949 film The Third Man by inviting Viennese zitherist Anton Karas to compose and perform the score. Given that the film is set in Vienna, the pairing denotes a certain authenticity, staying true to the atmosphere and culture of the city. But by having all of the music played on a sole instrument gives the film an idiosyncratic quality, a choice that seems both outside the box and very much of its time. Karas, to his credit, plays zither much like Django Reinhardt played guitar, in a gypsy jazz style. It’s a bit quirky and upbeat for a tale with sinister underpinnings, but then again, what’s what makes it so unforgettable. – Jeff Terich 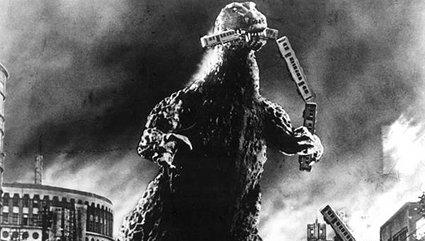 Famed Japanese composer Akira Ifukube initially set out on a career of forestry, and kept to music as a part-time concern, but ultimately had to give up his primary line of work after being temporarily hospitalized due to exposure to radiation during World War II. This, actually, turned out to work in his favor, as film composition ended up being much more lucrative for him in the long run, his work in dozens of Toho monster films earning him a reputation for creating some of the most powerful music of 20th century cinema, set to footage of giant creatures terrorizing Tokyo. His initial score for 1954’s classic Gojira (“Godzilla”) is a wonder of both upbeat and chilling atmosphere, with tracks like “Godzilla Comes Ashore” lending an awe-inspiring eeriness to some of cinema’s greatest escapism. Most importantly, however, Ifukube actually invented Godzilla’s trademark roar, which was created by scraping a resin-soaked leather glove against a double bass. That single screech of terror merits his inclusion, alone. – JT 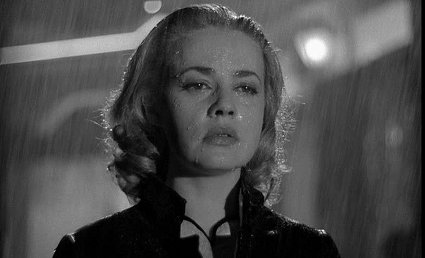 “Film companies have hardly been noted for any intelligent use of jazz as background music,” writes Albert McCarthy in the original notes that accompanied the release of Davis’ soundtrack. True enough, even looking back now, but it would hardly be doing this music and its presence in the film justice to say that it is part of the background. The music is the film’s atmosphere and the film’s atmosphere is the best reason, alongside the presence of Jeanne Moreau, to watch it. The main theme, or the credit music, “Générique,” has haunted me a long time with its languid mood, so much of which is down to the intoxicating melancholy of Miles’s trumpet. There’s also something dark in this music, a shadow world behind the loneliness projected front and center, so while one can easily see in it a precursor to the sound of Kind of Blue, the narcotic musical worlds Angelo Badalamenti has fashioned for David Lynch also seem to me to owe a debt to the more disturbing undercurrents of this soundtrack. – Tyler Parks 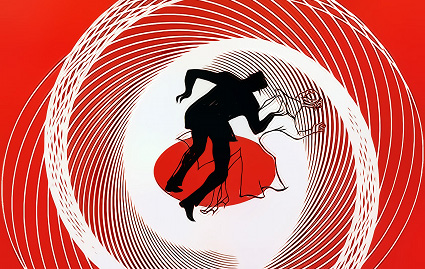 Just last year, Alfred Hitchcock’s masterpiece Vertigo edged out Citizen Kane as the Best Film of All-Time in the Sight & Sound critics’ poll, and it’s earned its spot there, primarily for being one of Hitchcock’s most complex and psychologically twisted works. But then again, it also has one of the most incredible soundtracks ever orchestrated. Bernard Herrmann has scored a few films in his day, many of them Hitchcock films and all of them great in their own way, but Vertigo stands out among them for its mixture of dramatic subtlety and symbolic parallel to Jimmy Stewart’s crippling acrophobia. The twists and turns of the strings and throbbing mechanism of the violins creates a very real feeling of vertigo in the listener. In a rich catalog of outstanding scores, Vertigo is one of Herrmann’s very best. – JT 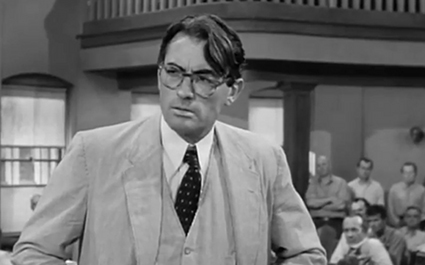 “To Kill a Mockingbird”
Elmer Bernstein
1962

This is only film that makes me cry with every viewing. Why, I don’t know. That scene where the town’s black folks rise from their seats in the second tier of the courtroom to pay their respects to Atticus after he lost the trial…goddammit it gets me every time. The might of Bernstein’s score is felt within the film’s first seconds. The opening taps of the piano prickle at my arms until goosebumps rise. THEN when the strings sweep in during the main theme, and those childhood memories of backyard games, action figures, and elementary school shenanigans conjure up, even MORE tears fall. I’m a damn wreck by the end. The score was nominated for an Academy Award, which was deserved: it could easily be the great-American-ballet-that-never-was. The statue that year went to Maurice Jarre’s score for Lawrence of Arabia instead…whatever (Bernstein won later in 1968 anyways and was nominated another 12 times). – Rick Moslen 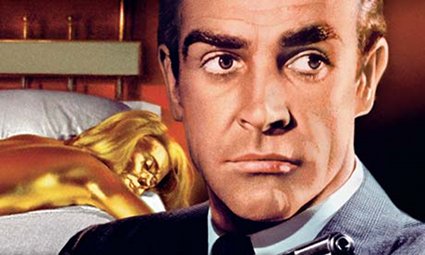 There is arguably no cinematic experience more fun than the 007 franchise, no matter how ridiculous, dated or retconned. And a pretty big part of that is John Barry’s legendary score, specifically the famous “James Bond Theme” an instantly recognizable mash-up of surf guitar and brass, making for the coolest entrance of a movie hero, and by extension coolest opening credit sequence, ever. However, this theme made its introduction with 1962’s Dr. No, and by 1964, when Barry had crafted his third Bond score for Goldfinger, Sean Connery’s Bond had a new star to sing him into the frame — Welsh diva Shirley Bassey. That said, Goldfinger’s score on the whole is one of the most stunning of Barry’s Bond oeuvre, matched only by You Only Live Twice and On Her Majesty’s Secret Service (which, as a film, tends to be overlooked). The Ventures-style instrumental version of “Goldfinger” matches the original, even if it removes some of Bassey’s over-the-top drama, and “Dawn Raid on Fort Knox” is some of the most heavy-hitting heist music to burst out of the screen. And while “The James Bond Theme” in its original form may not be on the soundtrack listing, it still crops up, first in “Oddjob’s Pressing Engagment,” and again in “Bond Back in Action Again,” which is a pretty faithful reprisal of the original. – JT 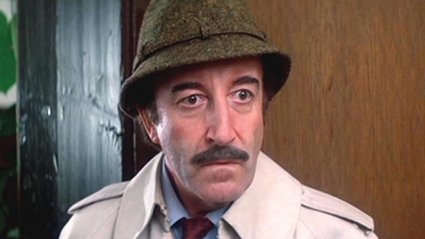 I would venture to guess that just about everyone reading this feature knows the legendary theme to The Pink Panther, probably even more so than the Blake Edwards detective spoof in which the bumbling Inspector Clouseau follows the trail of a stolen diamond (that would be the “panther”). It’s really just one of many unforgettable numbers in Henry Mancini’s canon, which also includes Breakfast at Tiffany’s, Charade and Peter Gunn. Here, however, he blends the archetypal spy theme sound, as perfected by John Barry, with a fun, light-hearted lounge-pop sound that makes it very much a product of the ’60s. At times it’s more of a swinging jazz-pop album than a prototypical film score, but every minute of it is loaded with charm and character. – JT 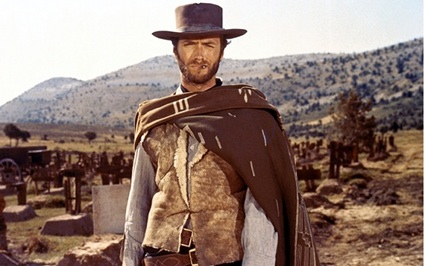 Ennio Morricone certainly wasn’t averse to whistling in his scores prior to The Good, The Bad and The Ugly, but the whistle carrying the melody to the title theme to what is arguably his most influential score (and one of the most influential scores of all time) has become so iconic, it’s still being used to soundtrack standoffs (and various commercials) even to this day.  It’s that whistle that underscores the genius of Morricone; he had an amazing ability to incorporate any number of unusual features— which often included human voices— and use them drive his sweeping orchestral arrangements in deeply affecting ways.  And yet, often times, it’s simply the wordless choruses that have the most impact.  At times it’s stirring and restless (“Il Tramonto”), at others grand and lush (see the epic “Il Triello”), but throughout the score Morricone purveyed an unrivaled depth. – Chris Karman 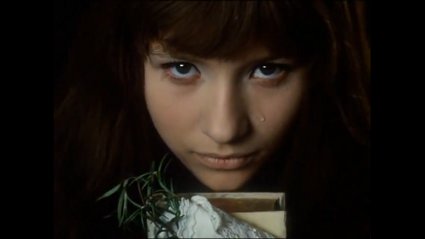 “Valerie and Her Week of Wonders”
Luboš Fišer
1970

In her contribution to the liner notes of Finders Keepers’ beautiful issue of the soundtrack to Valerie and her Week of Wonders, Broadcast’s Trish Keenan points out that there are two sound worlds in the film that seem to be at war. One is soft and light, consisting of childlike melodies, wonder, and innocence. The other is threatening, darkly religious and touched by horror – young women recite the names of Catholic saints and it menaces. The battle takes place within Valerie, as the film is an entwining of dream and reality that is hers, brought on by the arrival of her first period, the nearness of womanhood. The innocence is an innocence of sensuality, fantasy and pleasure. The innocence and accompanying openness are intrinsic to the creative spirit. Confronted by institutions and structures that would bring them in line, these forces of creativity take on many disguises, and such is the case in the film: masks abound and identity becomes multiple and changeable. “Inside the mask, another disguise,” as Keenan put it in haha Sound’s “Valerie,” her lullaby to Valerie, and Lubos Fišer’s music is perhaps the most important mask, concealing the line between fantasy and reality, and thereby filling the film with magic. – TP 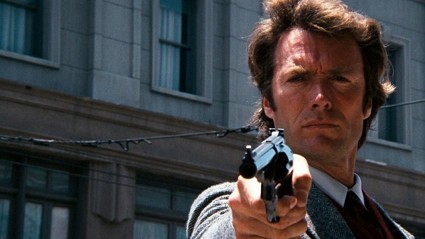 There is no composer in Hollywood so effortlessly able to set the stage for badassery quite like Lalo Schifrin, from his symphonic funk in Bullitt to his somewhat stereotypical sounds of the orient—gone funk—in Enter the Dragon. With a background in jazz music, the Argentine composer knew his way around a groove, but even more than that, he had a knack for imbuing that groove with sinister mood, or an almost absurd silliness if need be. With Dirty Harry, the complexity of his arrangements hit a new level, taking cues from Miles Davis’ experimentations on Bitches Brew and A Tribute to Jack Johnson, leveling off his ultra-cool melodies with atonality and dissonance, descending into raw terror funk in “Scorpio’s View” and putting up a wall of minimalist chill on the main title theme. Not that Dirty Harry doesn’t have its share of outright goofiness — “Harry’s Hot Dog” has a cartoonishness about it that almost seems out of place alongside “Scorpio Takes the Bait,” which mirrors the hard-boiled Harry Callahan’s pursuit of serial killer Scorpio with breathless tension and melodic sublimity. – JT