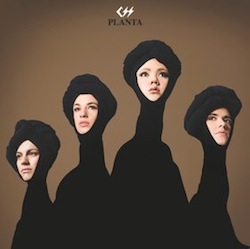 CSS first surfaced nearly a decade ago with the right sound, in the right place at the right time. The Brazilian group’s debut album Cansei de Ser Sexy entered the electrosphere with catchy, kitschy songs like “Let’s Make Love and Listen to Death From Above” and “Music Is My Hot Hot Sex,” leading to both critical acclaim and commercial success. But their neon-colored funky disco rock has slowly been diminishing in its ability to shock or surprise, leading to mundane predictability with releases Donkey and La Liberacion. This time around, CSS offer Planta, which contains a variety of new musical directions in an attempt to revive what they started long ago. Too bad the party has long since ended.

There is nothing sweet about their opener “Honey,” which begins with an apathetic Lovefoxx singing about insecurities and being a hopeless romantic. The song has almost zero vocal energy, and is a complete misfire of an opening track. Lead single “Hangover,” written in collaboration with Rancid’s Tim Armstrong, thankfully, is a tad more exciting than what precedes it. Lovefoxx’s giddy couplets like “Never had my heart broken till you/ I’ll walk through the gates of hell as long as I’m with you,” complemented by transitional trumpet blasts and obscure spacey zaps of synth, make for a unique and considerably more appealing song. However, there are also some brief attempts at rapping, which almost ruin the song entirely. “Hangover” has slivers of catchy danceability, but with two songs down yielding nothing too spectacular, it doesn’t bode well for the next eight tracks.

There is glimpse of light at the end of the tunnel when CSS finally find their groove on “Into the Sun.” The third track has a smooth melody, highlighting their quirky signature danceable rhythm that they’re capable of perfecting if they try hard enough. Lovefoxx finally projects some emotion in her voice, giving more resonance to lyrics about driving from the problematic past, and musically it builds up to the final two minutes of the same electronic disco that helped launch their career.

The brief momentum built up by that highlight is short-lived, thanks to “Girlfriend.” This song would live up to its potential for being a great pop-rock song if it only embodied half of the energy harnessed by a peer such as Sleigh Bells’ Alexis Krauss. CSS has all the same tools as Sleigh Bells at their disposal, and even Dave Sitek, who has a strong production resume that includes five Yeah Yeah Yeahs albums among dozens of other accomplishments, can only do so much when emotionless, monotone vocals derail the music. Planta teeters on being a fun album, but it would appear that CSS lacks a vital component of relaying emotion in their music, despite impressive instrumentals.

Toward the second half of the album, Planta starts to get too mellow. “Teenage Tiger Cat” is a bizarre song fitting for those who still think doing the robot is cool, but when CSS loses what little energy they had at the beginning of the album, it is hard to focus on their craft.

The CSS girls show so many signs of having the potential to create explosive disco pop, but they just can’t gain the momentum to build on it. They came into the spotlight at the right time, but they seem to be having a hard time finding their style and sticking with it. There are simply too many musical directions in Planta — punk rock with “Dynamite,” popular electronic noise in “Sweet,” and a dalliance with hip-hop in “Hangover.” CSS somehow keeps plugging along long enough to have arrived at their fourth album, but it’s hard to muster any enthusiasm for it when the musicians themselves appear to have none left.