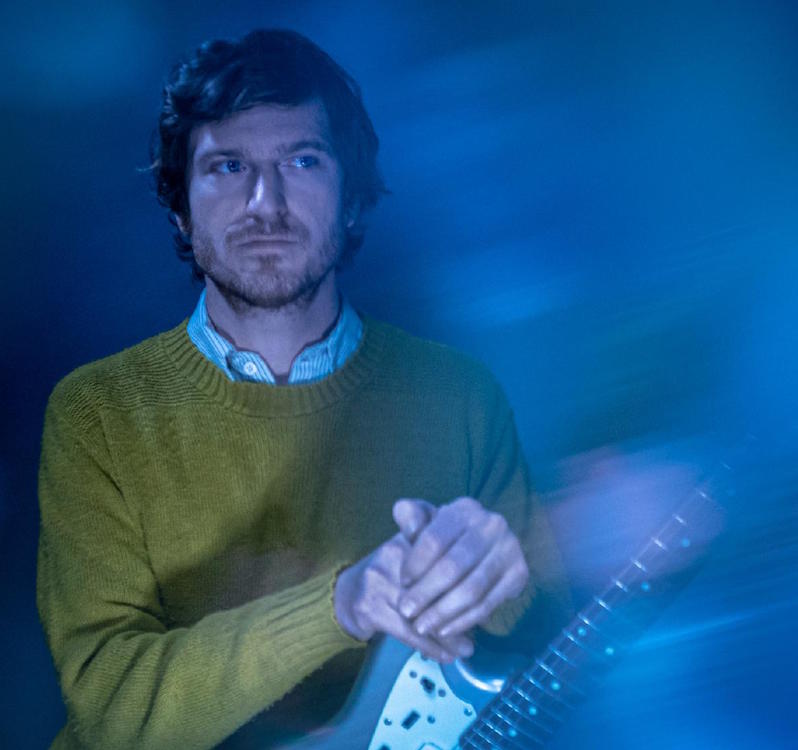 When Nick Reinhart picks up the phone, he sounds suspicious. The guitarist, songwriter and vocalist behind Disheveled Cuss has been spending his quarantine going down Internet rabbit holes into weird, unsavory subcultures. And when he sees an unfamiliar number calling him, he’s a little wary.

“I’ve been watching this YouTube guy who fucks with scammers, and I’ve been deep in this crazy scammer culture lately, and when I saw this phone ring with this crazy number I didn’t know, I just went into crazy scammer mode,” he says, after remembering that he had an interview scheduled. “Quarantine, non quarantine, it’s not really different from my regular life.”

Reinhart’s been keeping himself occupied during Covid-19 quarantine with YouTube videos and a game called NotPron, an online game developed 15 years ago that’s been billed as the world’s hardest puzzle. But he was originally supposed to be spending this time promoting his new album. Disheveled Cuss’ self-titled debut was released earlier this month via Sargent House, an uncharacteristically pop-friendly set of grunge-inspired indie rock that’s comparatively straightforward when juxtaposed with Reinhart’s more complex work with Tera Melos. It’s a fun record, one that traffics in big rock anthems and pop choruses, with just enough intricate weirdness to draw a connection back to Reinhart’s other, sensory-overload-dealing band. Though it’ll be some time before Reinhart can perform these songs live, and

We spoke to Reinhart about his new album, the industry standstill, and the nostalgia trap.

Treble: Disheveled Cuss is pretty different than what people are used to hearing you do with Tera Melos—were you seeking to do something significantly different than you had been?

Nick Reinhart: I have been kind of demoing these basic song ideas, in fact i was cleaning up my computer last night and found demos from 2010 of songs I had completely forgotten about. There are riffs on the record, loose song ideas, that go back to 2006. It’s always been in the back of my mind to write these simple songs—simple for me, as compared to the stuff I’ve been doing for the past 15 years. I just didn’t have a format to present them in. Me, and this drummer JR Kurtz, we’ve been jamming these songs in a practice space for almost five years now. It’s a thing that had this really slow process of completion until I was just like “OK, I’m ready to make this a real thing.” The ideas have been floating around, I just didn’t have a way to present them. Like I would take them and try applying them to a Tera Melos record, but I never fully realized it until this record.

Treble: There are still intricate and complex elements of the new songs, though…

NR: It’s funny because, for years, people were like, “these guys are in this band Tera Melos, so they must be into this obscure prog record.” Like people were recommending stuff, and I don’t really listen to that kind of music. Maybe I did when I was a kid. A buddy sent me a link to an unreleased Teenage Fanclub record, and I was like “oh wow! I didn’t know about this!” or an obscure Clash demo—that’s what excites me. It’s such a big part of my personality, and I’ve never had it represented in my music. This would be nice to finally get this out.

Treble: Some songwriters might argue that it’s harder to write a simpler song that’s really good than it is to make something with a lot of moving parts.

NR: I don’t agree with that. Writing simple songs to me is just a dream come true. I’ve spent so many hours in practice spaces working on 30 seconds worth of music. “Oh cool, we’ve been working on this bridge of a song for three months and haven’t progressed with it.” It’s years of that. And someone mentioned that it’s like batter up in a baseball game, and you practice swinging with seven bats just so you can swing with one. It’s kind of the same thing. We’ve been grinding on these insane, complicated structures, weirdo songs for so long that, to strip it back, the hard part would be trying to not complicate it. And maybe that’s what people mean too. But I don’t need to stress out on this song. It sounds good to me and I can move on.

Treble: How frustrating is it to be releasing a new album when the industry’s pretty much at a standstill?

NR: I kind of launched the band with a tour last year, a short tour opening for Pinback and Rob Crow played bass for us. And it was really cool—hey here’s this new band! And then record coming out! And then a couple more tours coming up. And album announce, and it all goes away. It’s incredibly bizarre. There’s no album cycle. The album comes out and people will listen to it and maybe leave a comment or two on Bandcamp, and then that’s it. It feels weird to not have an album lifespan, because that’s what you do, you go on tour and you do press. I don’t know, it’s weird, to announce a band that I was conceptualizing for so long and not be able to do anything with it.

Treble: This album feels more personal than anything you’ve done with Tera Melos—is that a fair assessment?

NR: Yeah, it’s a whole new level of, I guess, personal stuff. I haven’t felt comfortable singing about or writing about that sort of thing in previous bands or whatever. The contrast of the lyrics to Tera Melos music, I see it as a very specific thing. It’s an art project. But Disheveled Cuss is just, here are some pop-rock songs that are pretty cool. So I feel more comfortable singing about personal things to me instead of smashing a bug on the wall and trying to find an artsy way to describe it. Tera Melos songs, I relate to all that stuff in a way, but this is just personal. I’m singing about my life or whatever. It’s not shrouded with all these other things that are going on. It’s just a more basic version, I guess.

Treble: Is there, ultimately, a specific objective with Disheveled Cuss?

NR: There wasn’t any other reason to do it other than I’m gonna write catchier sounding songs. I didn’t have any agendas with it. I guess the one thing that kind of starts to worry me with doing interviews is people asking me about the nostalgia thing. I don’t understand what people mean when they bring that up. “Is it nostalgic? It’s so ’90s sounding.” That is the music i listened to in my formative years. Pop-rock and punk music and whatever this thing is. The Tera Melos stuff and whatever I’ve done for the past however many years, that was my twenties. I latched onto this crazy experimental weirdo stuff. But there was this whole other part of my personality that wasn’t represented. I don’t know if nostalgia is considered a good thing or a bad thing. I didn’t set out to make a ’90s sounding record, but at the same time that’s all my favorite music. So I guess in some way I did set out to do that.