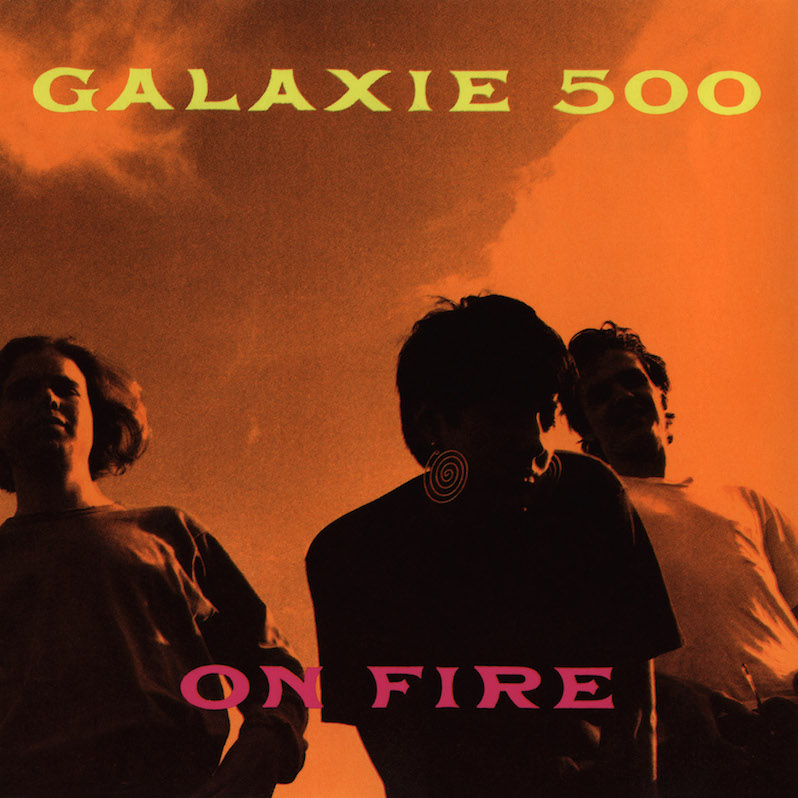 In theory, Galaxie 500 shouldn’t have worked.

Their music sounded like Jonathan Richman on Ambien. It was too slow for indie rock, too showy for slowcore, and too grounded for dream pop. And Dean Wareham’s voice is at best unique and at worst off-key. These are not the qualities of a band that will release a classic album.

But in 1989 they did just that. On Fire is a record of quiet explosions, a collection of stories that feel momentous despite their small size and peculiarity, and a whole lot of acid trips. There’s a lightly psychedelic sheen to On Fire that makes its honeyed guitar tones come to life.

Galaxie 500 comprised three shaggy looking kids: Naomi Yang on bass, Damon Krukowski on drums, and Dean Wareham on guitars. They met as students at Harvard, and after cycling through punk bands, found each other and began playing sublime pop music. They named the group after a friend’s Ford Galaxie 500. It was that simple.

Every song on On Fire starts the same, with a drumbeat the pace of a waltz and a few guitar strums. Galaxie 500 wrote one song, but it’s one really great song. Every guitar solo is different—just compare “Blue Thunder” to “Snowstorm” to “Tell Me.”

These solos always come at the end of the song, when it has built up into an entirely different beast than how it started. Galaxie 500 mastered the art of the casual crescendo. Listen to “When Will You Come Home” or “Decomposing Trees” and try to find the exact moment they lift off the ground; it’s near impossible. That’s because of exemplary songwriting and a trio of musicians inside each other’s minds. It’s also because of the unexplainable magic that three kids could get together and just crank out a record this good like it was easy.

It’s funny that Galaxie 500 wrote a song called “Snowstorm,” because their music sounds like a warm hug. This is the central appeal of Galaxie 500. Jamie Stewart said it best on Xiu Xiu’s “Dr. Troll”: “Listen to ‘On Fire’ and pretend someone could love you.” It’s an album that is almost purely happy, mostly devoid of conflict or ugliness (unless you count Wareham’s voice). Sometimes I’m not looking to be challenged by my music. Galaxie 500 is always there when I need them. In that way, they’re like your mom (maybe they’re like your mom in other ways too, but that seems more personal).

And there are just so many great moments on On Fire. Like the cymbals that crash when Wareham sings the titular phrase on “Snowstorm,” or the noisy guitar solo at the end of “Tell Me” or the saxophone on “Decomposing Trees.” Or the George Harrison cover at the end of On Fire, “Isn’t It a Pity?” That one doesn’t have a particular great moment, because the whole thing all the way through is great.

Galaxie 500 would release one more album after On Fire, This Is Our Music. It’s a nice if weaker follow up to an album that couldn’t be followed up. The band came from a certain lineage of groups who needed to make one great album so bad they never made another good one. Wareham, Krukowski, and Yang called it quits after that, but it’s hard to be mad at them for that. For one, apocrypha paints Wareham as a bit frosty (he apparently broke up Galaxie 500 with a phone call), but more importantly, they had progressed their sound to its natural endpoint. On Fire did everything the trio could do well almost perfectly. What else could they go after that?

There isn’t much of an argument for Galaxie 500 that their songs don’t already make. Just put on “Blue Thunder,” the band’s finest moment. It’s got one image—driving down the highway and looking at the clouds—but when Wareham starts wailing, “I drive so far away,” the song takes off onto the Interstate. It’s massive and anthemic, something dream pop and slowcore usually avoid. It truly feels free.

***
Buy this album at Turntable Lab