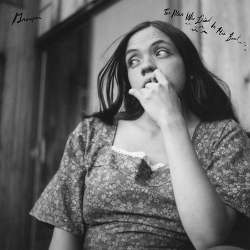 Atmosphere is important to Liz Harris. I don’t know this about her personally, or whether she’s ever said this in an interview. I’m not sure to what degree her actual spatial environment plays a factor in inspiring her work. But I still feel pretty comfortable reaching this conclusion, for few contemporary singer-songwriters make better use of ambient textures than Harris, better known as Portland’s Grouper, and occasionally half of the ambient pop duo Mirrorring. In a manner of speaking, Grouper is atmosphere, a wispy, spectral mixture of distant, simple sounds and eerie touches of reverb. At its basic core, Harris’ music is acoustic folk, but it’s never really quite left to bask in that simplicity; once the finished product arrives, it’s dressed up in static and gauze, draped hauntingly like the dress form on the cover of the Cocteau Twins’ Treasure.

Of Harris’ handful of offerings, the release that comes most closely (so far) to perfecting the solution is 2008’s Dragging a Dead Deer Up a Hill. Though the album isn’t quite the broad cult phenomenon that, say, Panda Bear’s Person Pitch was, its approach and profoundly moving sensibility is comparable. It’s the least noisy of Harris’ work, and likewise, has gradually found an expanding circle of enthusiastic listeners, though at the time it was only half of a planned series of albums with complementary halves. Now, as Harris has made the move to Kranky, she’s offered up that other half, the stunning and chilling The Man Who Died in His Boat, an album that possibly even eclipses its companion.

Much like Dragging, The Man bears a title that references death, and it’s easy to get the feeling that Harris is somehow channeling the music of a long deceased world. She, herself, has a ghostly presence on tape, but it’s comforting and gentle rather than scary. She arrives like the benevolent visits of youthful apparitions, singing hymns to her hosts rather than sending them away. Most of her melodies are fairly simple, even meditative, as on standout “Vital,” which cycles through a soothing four-chord sequence, or “Cloud In Places,” which takes a similar tack, her steel acoustic strings squeaking and ringing out calmly. Yet she changes up her approach now and then to allow in more experimental tones, as on the ambient hum of “Difference (Voices)” or the prickly plinks of piano on “Vanishing Point.” When she returns to her acoustic strums, however, it’s invariably comforting, and just about always beautiful.

The variations that exist in Grouper’s songs can be pretty expansive, though with The Man Who Died In His Boat, they’re fairly narrower, Harris in this instance focusing primarily on melodic, stripped-down compositions that occasionally let other elements in to play. It’s the stuff of surreal dreams, otherworldly but powerful in their evocative sonic treatments. As folk songs, they’d be wonderful enough on their own; as the humming bits of dreamy etherealism that Harris provides, they’re sublime.

A Beginner’s Guide to the ambient pop of Grouper