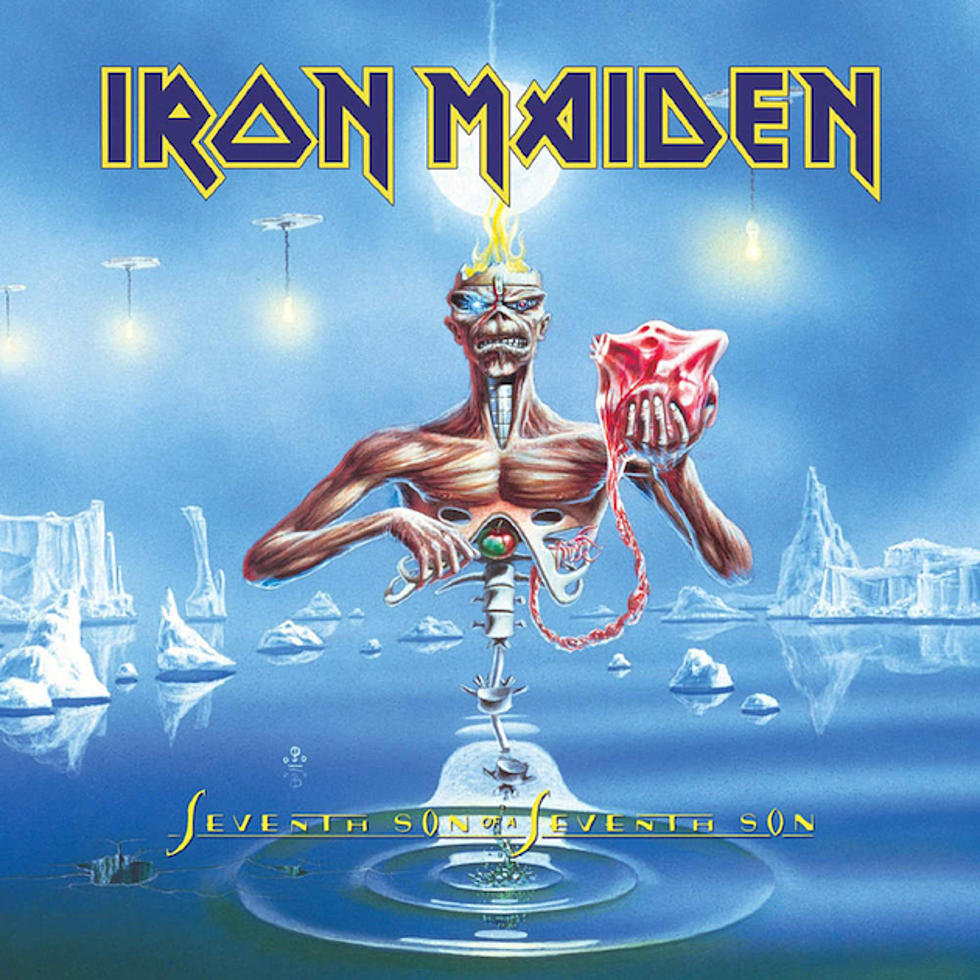 In 1982, Iron Maiden released The Number of the Beast and became the most important band in heavy metal for the next half a decade. While it’s tempting to look to Metallica, Slayer and other thrash bands of the era for this position, it’s important to remember that, historically, their big breakthroughs didn’t come until the end of the decade. Until then, Iron Maiden was king. While their first two albums are excellent in their own right, they are just as primordial as they are charming (in fact, to some this is precisely their charm). It is telling that, on tour for Beast, Iron Maiden opened for Judas Priest, themselves touring their Screaming for Vengeance record; this served as a passing of the mantle of most important metal band, a title Priest had inherited in a similar manner opening for Led Zeppelin on their final tour. With the arrival of Bruce Dickinson, a vocalist who sits as equal in the triumvirate of Rob Halford and Ronnie James Dio as greatest metal vocalists of all time, as well as some minor tweaks to songwriting, The Number of the Beast signaled the beginning of the first golden age of Iron Maiden, with a magnificent run of top-grade metal albums Piece of Mind, Powerslave, Somewhere In Time and, their pinnacle, Seventh Son of a Seventh Son.

In 1988, Iron Maiden released Seventh Son of a Seventh Son, which was, for over a decade, their last truly great record. Their two follow-ups with the golden age lineup, No Prayer for the Dying and Fear of the Dark, have excellent tracks on them, but they are also marred with faulty experiments, poor return-to-basics songwriting and timbres, and a chintziness that, until then, hadn’t been part of Iron Maiden’s rough, progressive, laser-honed and leather-clad sound. The two records after that, The X Factor and VIrtual XI, were perhaps unjustly maligned at the time and in recent years, between remasters and live performances of certain tracks from that period, they’ve seen their esteem rise; even so, they were part of a necessary process of Iron Maiden rediscovering that initial artful impulse that made their sound ferociously burst into form even as early as their debut. Their sound welded together progressive rock theatrics, traditional heavy metal indebted to Judas Priest who were the first to cleave blues fully from heavy metal’s prototypes in the ‘70s, and a dash of the toughness and vicious speed of punk (an aspect of their sound soon to be noted by the then-nascent Metallica and other thrash founders). By the reunion record Brave New World, which featured many songs left written but unrecorded from the brief period that saw the band without their iconic frontman, Iron Maiden saw themselves returned to fighting form and entered an era that matches pound-for-pound their earlier period, albeit this time leaning heavier on the progressive impulse of their sound than the leaner, tougher first golden age. Which means, in retrospect, that Seventh Son—which turns 30 this month—acts as an apex.

It is sometimes faultily referred to as their prog record, a title that makes little sense when looking at the full body of their early work. Stripped of metallic timbre and punkish speed, early tracks such as “Transylvania,” “Genghis Khan” and others from their first two records, the punkiest of the bunch, would not be out of place on a Yes record, a noted major influence on primary songwriter and de facto band leader Steve Harris. Likewise, this punkishness itself was largely due to production and tempo choices and the vocal timbre of their then-vocalist Paul Di’Anno rather than compositionally; as early as their first album, they indulged in seven-plus-minute multi-movement song structures. Their influence on progressive metal is thoroughly vetted from artists as close to contemporary as Queensryche and Fates Warning all the way up to contemporary acts, and a large portion of this is due to the manner in which they used the same lush, multi-component layered arrangements of Genesis, Yes, Wishbone Ash and Deep Purple as the bed for their heavy metal rather than falling into the typical rock split of rhythm and melodic sections. It is not hard to imagine large chunks of their material played by Rush, especially in their more metallic ’70s iteration.

Troubling to the claim of Seventh Son being their first truly prog metal record is also complicated by tracks such as “Hallowed Be Thy Name,” “To Tame A Land,” almost all of Somewhere In Time, and, most undeniably, their progressive metal magnum opus “Rime of the Ancient Mariner.” The claims of Seventh Son seem to come more from increased usage of guitar synthesizers (an instrument that functions literally as the name suggests) and the fact that this was Iron Maiden’s first full concept record, loosely retelling the events of the Orson Scott Card novel Seventh Son. But this instrumentation, also used on the similarly-timed record Turbo by contemporaries and influence Judas Priest, belies a sheen to the sound that aligns itself more with pop than prog.

Which of course doesn’t undercut that prog is certainly present here. If anything, it highlights a bit of the hidden history of prog, that bands from Yes to Genesis to Supertramp and more started as pop rock bands applying extended and avant-garde techniques to what was still comfortably within the realm of pop. It was only in looking back that we have decided culturally to separate these groups from similarly art-minded pop auteurs like David Bowie and the Beatles and the Beach Boys, who would better be described as contemporaries in thought and performance. (Rick Wakeman even played piano on Bowie’s greatest compositional triumph, Hunky Dory’s “Life on Mars?”.) A contemporary counterpoint would be Mastodon with Crack the Skye, where the pop sensibilities of producer Brendan O’Brien invites in the air and sonic cohesion that allows the progressive, atypical approaches of both that record and this one to achieve the progressive heights they sought.

It is this poppiness and the frank gorgeousness of the production, a knack that was first tapped on immediate predecessor Somewhere In Time, that produced the true hallmark of this record: the first Iron Maiden album where every single song is immediately catchy, memorable and absolutely enthralling to listen to. This may be painful to admit for some, but up until Seventh Son, it was impossible to find an Iron Maiden devoid of a skippable song. This is most egregious on otherwise sterling and fundamentally important heavy metal albums such as Piece of Mind with the absolutely abysmal “Quest for Fire” or less so with Powerslave’s remarkably dull “The Duellists” pock-marking an otherwise perfect heavy metal masterwork.

Seventh Son meanwhile has no such weaknesses. The first side of the record, from the opener “Moonchild” (in my personal view perhaps the greatest song the group has ever recorded) to “Infinite Dreams,” “Can I Play With Madness?” and “The Evil That Men Do” plays like a veritable greatest hits, while the back half has the 9-minute prog metal title track, “The Prophecy,” “The Clairvoyant” and “Only The Good Die Young,” a marginally weaker batch that make up for some curious decisions especially regarding bridges by having some of the heaviest riffs and most adventurous instrumental stretches on the entire record. What results is a crystallized and perfected set of songs with no visible cracks in the structure, just a searing set of poppy, proggy, arena-filling science-fiction riffs and vocals with a dash of Satanism for good luck. (This is heavy metal, after all.)

This powerful set of songs is partly due to the leaner run-time; Seventh Son, at 43 minutes, is the band’s first record since The Number of the Beast to clock in at under 45 minutes, with its two predecessors Powerslave and Somewhere In Time clocking in just over 50 minutes each. Seventh Son’s runtime is closer to the first three records, which each hovered around 40 minutes each; and, interestingly enough, if you subtract the weaker tracks from their track listings, the three longer records come down to roughly this length as well. Indeed, one of the biggest complaints about Iron Maiden from the Bayley-era forward is a general long-windedness that doesn’t add much. It’s rare to find a critic or fan who thinks the material from The X Factor forward is utterly without merit, and it’s generally agreed that there’s few if any utterly irredeemable songs from 2000’s Brave New World onward. The running theme of criticisms hovers around great 4-5 minute songs finding themselves pushing seven, eight or more minutes in length due more to compositional indecisiveness over which intro or bridge to include.

Seventh Son suffers none of these faults instead relying on rarefied microcrystals of song.There’s not a wasted moment nor an aimless riff on the album. It’s one of the last Iron Maiden records where every single riff of every single song is hummable, catchy, memorable.

Seventh Son of a Seventh Son is, simply, the best set of songs Iron Maiden ever delivered, without weakness or fault, offered at the height of their powers in that first golden age. They have more undeniable classics outside of this record, but no other record is wall-to-wall perfect tracks the way this one is. As such, it represents not just itself but the band as a whole, this beautiful period in their career where they saw themselves transformed from a bar band to legendary and permanent gods of metal on the level of Black Sabbath, Led Zeppelin and Judas Priest, represents this era in metal which fell to the blade of the rise of hardcore and grunge and indie rock, represents metal itself. It is hard to overestimate the value and position of Iron Maiden within the history of metal and, from there, music in general. And this record is the pinnacle of that reason why.