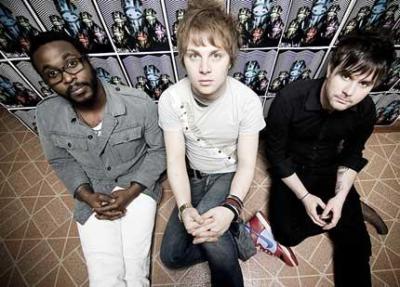 Jaguar Love emerged last year fully-formed from the remains of Blood Brothers and Pretty Girls Make Graves. Their sound is every bit as feral as the name suggests, like a low-slung noise-coated predator, ears pinned back with razor-clips. Their full-length debut `Take Me To The Sea” is a hot-wired mix of post-punk, post-glam and shout-out-loud melodicism. Last month Treble caught up with drummer/guitarist/impresario Jay Clark from the road in New York.

Treble: I’m interested in what it’s like when people from other bands come together for something new. Is it something you go into consciously trying to meld the best of old sounds or do you find yourself more or less starting from scratch?

Clark: I think we more or less started from scratch, I mean obviously you bring some of the old elements with you, but we just wanted to make music.

Treble: Ok, so how would you characterize Jaguar Love with respect to its predecessors, is it the best of both worlds if you will?

Clark: Well it’s new, that’s what we wanted, something new. I don’t know how it compares specifically to Blood Brothers or Pretty Girls or whatever but we went into it with the impulse to make something new. Something different.

Treble: So you guys hooked up and started seriously recording in Portland?

Treble: What made you decide to go with Matador, ultimately?

Clark: My old band Pretty Girls was on Matador. I mean we wanted to go with people who were good, obviously. You don’t even really need a record label anymore, really but it’s a good fit for us.

Treble: On the record there’s a noticeable push toward a sort of more anthemic songwriting. That’s the main difference I spotted if we’re talking comparisons between the previous bands.

Clark: I think that comes from Johnny (ex-Blood Brothers/Neon Blonde frontman). He wanted things to be as melodic as possible. I like to make things dramatic so it’s a combination of the two, maybe.

Treble: Is “The Ma n With The Plastic Suns” your Smiths song or is that me being perverse?

Clark: How do you mean?

Treble: There’s something kind of fey and devious about it, or maybe it’s more that it’s a dark lyric wrapped in a sunny melody.

Clark: That’s interesting, most people seem to think it’s got more of a proggy sound to it. But it’s one of those that’s pretty adaptable, I think.

Treble: Are all the former bands gone for good?

Clark: I think so, yeah. I mean the only one I’d hesitate to say that about would be Neon Blonde because that’s mostly just Johnny, mostly his thing. But Blood Brothers and Pretty Girls, yeah I’d say so. Unless we do a reunion tour in 20 years.

Treble: Was there anything you played during sessions for this record that colored the process at all?

Clark: No I actually didn’t play any records while we recorded.

Clark: It was such a fast process and we just wanted to get it done and afterward all I wanted was silence. I remember bringing a record player and something like 200 records to the studio and I didn’t play any of them.

Treble: So was that more about throwing yourself into the process or more about wanting to keep your own language intact?

Clark: It was more that I was exhausted. Sometimes when you’re done working you just don’t want to play any music. We were working without a second engineer, I was doing everything myself, set-up to teardown…18 hour days, sometimes. When all that was over and even during it, all I wanted was silence.

Treble: What about lately, are you playing anything you’re excited about?

Clark: Yeah, some Afrobeat stuff, a band one of the guys in Pretty Girls turned me onto, kind of world music stuff. I caught the MGMT show recently. Their record is really exciting.

Treble: Do the names of certain musical genres amuse you as much as they do me? Like people called Blood Brothers post-hardcore. What does that even mean?

Clark: Yeah you’re right I don’t know what that means, either.

Treble: I know Liars, for instance are pretty unclassifiable but they just tell people they play rock `n’roll. What does Jaguar Love play?

Clark: It’s like that. We play rock music. Some of it’s a little new but it’s just rock. People find what they find.

Treble: You’re sort of a product of the Seattle music scene. Any thoughts on the state of it lately?

Clark: It’s kind of folky. A lot of singer-songwriters. I mean that sort of thing is coming back across a lot of genres, really. But that sort of music is very native to Seattle and the vibe there, the climate. There’s always going to be that element there. Same thing in Portland.

Treble: What does a vocal and theatrical force like Johnny mean for a band? What’s it like playing behind him?

Clark: Johnny’s no different than any other singer, honestly. He’s got his own voice and it’s very unique but when I’m back there he’s the same as any other singer. I hear him and that’s all.

Treble: Queens Of The Stone Age? You toured with them. How high was the chill element?

Clark. High. We went out and had drinks. They’re nice. You’d be surprised.

Jaguar Love : Take Me To the Sea