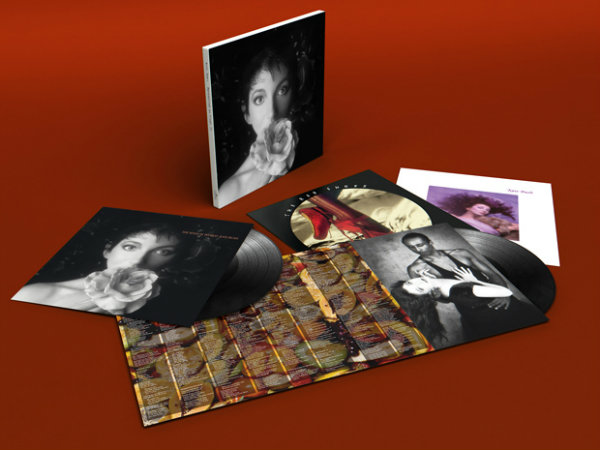 Kate Bush‘s complete catalog is being collected in a series of CD and vinyl box sets. All of her 10 studio albums will be released as well as rarities from throughout her career. The remastered vinyl box sets, titled Remastered In Vinyl, will be released in two phases, the first two being released on November 16 and the second two on November 30. Remastered In Vinyl 1 features the albums The Kick Inside, Lionheart, Never For Ever and The Dreaming. Part two includes Hounds of Love, The Sensual World and The Red Shoes. The third box includes Aerial, Director’s Cut and 50 Words for Snow. And the fourth box set features the rare tracks collections The 12″ Mixes, The Other Side 1, The Other Side 2 and In Others’ Words. In Others’ Words is a covers compilation, while both The Other Side records comprise b-sides and The 12″ Mixes features alternate single versions. The CD box sets will be released in two halves, the first spanning from The Kick Inside to The Red Shoes, and the second from Aerial to the rarities discs, as well as the live set Before the Dawn. Take a look at the tracklist for the contents of Remastered In Vinyl 4.

Read our Celebrate the Catalog feature on the complete Kate Bush discography.