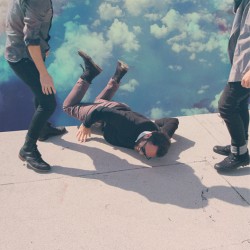 True, hummingbirds are incredible birds, in some instances able to flap their wings at a hundred times per second, but the hummingbird referenced on the Local Natives’ sophomore record isn’t necessarily an affirming symbol; rather the bird as portrayed on the record is betraying a costly sacrifice as it crashes dramatically in front of singer Kelcey Ayer. Although the connection to the crash with regard to this sacrifice is never fully explained, that the doomed bird has been chosen to represent the record is telling. Hummingbird retains many of Local Natives’ strengths, but it is certainly not a redux of the band’s debut Gorilla Manor; this is a band now firmly in touch with their melancholy side.  All but gone are the vague references to Afrobeat and a Talking Heads cover may not feel quite at home on this collection. Don’t let that trouble you — Local Natives may have excelled at quirky, post-Vampire Weekend pop, but the band sounds even more confident letting their somber side show. Along with their new direction, Local Natives display remarkable growth in all of the right areas and feel even more cohesive as a unit.

From the onset, opener “You & I” skillfully mounts a soulful assault. Ayer’s tenor is often reminiscent of My Morning Jacket’s Jim James, but as he transitions into a moving falsetto during the chorus, the shift this band has made from their debut is striking. This is a band serious about their craft. As they slowly assail the listener, Local Natives employ tactics that have grown familiar in indie rock in recent years; the chiming, slap-back delay-laden guitar work, the piano hits, strings and horns. It’s a familiar style and throwing around names like Arcade Fire, Grizzly Bear and, of course, The National— whose Aaron Dessner produced the album — may be appropriate, but this album has enough distinctive character to render such comparisons unnecessary, even if such comparisons don’t exactly prove flimsy. The stunning “Breakers” may hold some resemblance to the chamber pop of Veckatimest, but Local Natives have a way with swiftly moving chord progressions that feels utterly unique. They may inhabit certain popular flavors, but nothing they commit to really feels like the work of any other band.

Local Natives still employ incredible vocal layering and it’s arguably even more effective coupled with the band’s new melancholy sway. One of the record’s highlights, the penultimate track “Colombia,” however, is also one of the more vocally stark songs the band has written. It’s one of the album’s more sentimental moments, but its sincerity is truly moving.  As Ayer repeats “Patricia, every night I’ll ask myself/Am I giving enough?” and “Am I loving enough?” his simple refrain is conflicting. His gratefulness seems to carry with it stains of regret and as a result, this seemingly simple song offers more difficult questions than it answers.

Local Natives’ debut was enjoyable enough, but what it really offered was promise.  Here was a band that clearly had a lot going for it—they so aptly synthesized their influences into a very effective set of songs— but there was still a feeling looming over the record that they hadn’t quite come into their own yet. Hummingbird more than delivers on that promise and although I wouldn’t put it past the band to one day surpass even this record, the album is an absolute success.  What the band has yielded in quirkiness they’ve more than made up for in beauty and clarity of vision and this is certainly one of 2013’s first great albums.