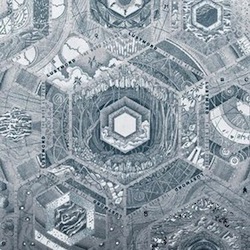 Speak the words “dark ambient,” and those who have any idea what you’re talking about will likely make an immediate association with Brian Williams, the British producer and innovator behind Lustmord. After launching Lustmord in 1980, Williams has taken his ominous, dense and scary-as-fuck sounds into strange and amusing adventures over the past three decades. Even before Matthew Herbert recorded the life and death of a pig, Williams recorded music in slaughterhouses and crypts. He’s collaborated with Tool and released a full-length collaborative album with The Melvins, as well as having worked with any number of industrial music pioneers, including SPK, of which he was a member. And despite being an atheist, he performed as part of the high mass observance of the Church of Satan.

Despite Williams’ many collaborations over the years, throughout his solo output, one won’t find much in the way of vocals, other than the occasional Tuvan throat singer — his sound is more about an ethereal sort of dread that doesn’t lend itself well to the sound of an individual vocalist. But that changes on new album The Word As Power. The clue to the shift is in the title, which pretty clearly prepares the listener for an album of awe-inspiring, if still quite unsettling vocal tracks. Williams has paired with a list of notable vocalists in the dark musical arts, including Aina Skinnes Olsen, Soriah, friend and Tool vocalist Maynard James Keenan, and First Lady of Avant Garde Noise Rock, Jarboe.

Williams’ selection of vocalists is key to The Word As Power. As cool as it might be to hear some black metal singer screech his way through some of these harrowing, lengthy pieces, they take on a more mystical, spiritual tone, and someone like Jarboe is better able to convey that than a corpse-painted ghoul (though Atilla Csihar could probably pull it off). Yet the identity of the vocalists is hardly important, here. They become part of the atmosphere, players in a consuming whole that feels altogether otherworldly and awe-inspiring, and, as expected, often scary as fuck. And yet, there’s a soothing, meditative quality to a track like “Goetia,” which hums in hypnotic drones. Meanwhile, “Chorazin” and “Grigori” come across like medieval chants, relics from a long-forgotten era that predates Ableton. That’s a key component of all of Lustmord’s music, actually, in spite of whatever technology ables him to continue to create such strange and darkly beautiful music. His is not the sound of electronics so much as the sound of spirits being channeled through them.