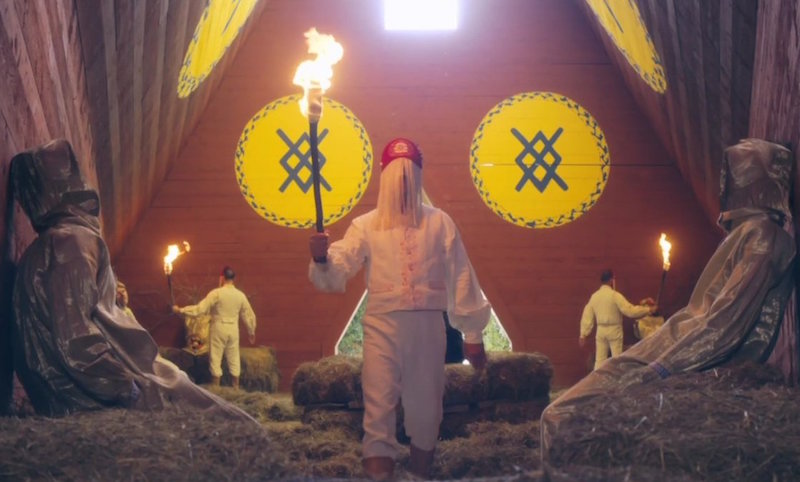 From the very first sound of Ari Aster’s Midsommar, it’s clear that music is not just an element of the film, music is its own character. It opens with a rather shrill soprano line, set against a dark wintery night, location unknown. In the sense of the score, many of Bobby Krlic’s compositions are beautiful out of context. The final track, “Fire Temple,” brings to mind the string quartets of Debussy or Grieg’s lyric suites. Any of those works would be soothing by themselves, but viewing the scenes that accompany “Fire Temple” makes it unnerving, providing the sound of knowing death is imminent and unstoppable.

Perhaps the most haunting parts of Midsommar’s musical quotient is not even the score, but the bursts of pain and realization from the characters who were doomed from the moment they accepted the Swede’s drugs. In the case of Dani, however, her wails and bellows induce the worst panic of all. Upon learning of her sister murdering her parents followed by her own suicide, Dani calls her (lazy, withdrawn) boyfriend Christian, emitting a terrifying series of screams that are impossible to unhear.

Throughout the film, the sounds created by the Harga during various ceremonies and scenes are full of pain and triggered by disturbing acts, but there’s constantly an underlying sense of catharsis as the driving force. Witnessing Dani’s panic attack, not long after her crowning as the May Queen, is a difficult scene to swallow. Moreover, there’s a large sense of relief, both on her end and the other female Hargas. Through Dani’s crying, she is releasing her relationship with Christian, her future with the Hargas probably more freeing than the life she would have had with him. As Dani leans into her collapsing relationship, the sisterhood of Hargas embrace her strife, joining into her screams to create a synchronized expression of trauma. For the viewer, it becomes a mix of horror and catharsis to watch her mental collapse unfold.

Similarly, another cluster of female Hargas provide a disturbing vocal experience, during the ritual sex scene between Christian and Maja. Interestingly, the Hargas are rather quiet during everyday life. Outside of their ceremonial speeches and yelling at Mark to find a different, non-ancestral tree to urinate on, the Hargas don’t have much dialogue between one another. They eat in almost silence, communicating more through their physical motions. So, it makes sense that they are at their loudest during the most uncomfortable scenes, choosing to sing their sorrows and pain rather than discuss it.

While the Hargas are not an actual group of Swedish villagers (or at least I hope not), there have been similar vocal techniques utilized in other parts of the world. In Tuva, a rural region in Russia, throat singing is referred to as Khöömei. In The Smithsonian’s article “Throat Singing: A Unique Vocalization From Three Cultures,” it’s explained “Throat-singing in Tuva is almost exclusively practiced by men, although the taboo against women throat-singers, based on the belief that such singing may cause infertility, is gradually being abandoned, and some girls are now learning and performing Khöömei.” The Inuit of northern Canada also practice a form of throat singing, although it was banned by local Christian priests over 100 years ago. It is just now being reintroduced to the culture, as younger Inuits feel it connects them with their ancestors. The article adds, “Unlike Tuvan throat-singing, the Inuit form of throat-singing is practiced almost exclusively by women. It is also a more communal form of singing than the Tuvan variety, usually performed in groups of two or more women. Their technique relies more on short, sharp, rhythmic inhalations and exhalations of breath. It was traditionally used to sing babies to sleep or in games women played during the long winter nights while the men were away hunting.” This brings to mind the quick breaths taken by the women in Midsommar before the May Queen competition.

The strongest driving force behind Midsommar is of course pain, but for Dani, it is so much deeper than that. Her reactions to the awful events in her life can only be released through her own personal form of music, her choice being a therapeutic form of scream-crying. Expressing herself vocally becomes a crutch for Dani whether it is during a bad hallucinogenic trip or the panic she experiences after the Ättestupa. Bobby Krlic may have created a haunting score, but Ari Aster’s additions of Dani’s wailing act as their own separate, terrifying soundtrack.

While the Hargas are not actually a real life group of people, there are certainly many elements akin to other existing cultures, mainly within the strong sense of sisterhood and unbreakable connection the women implore and wrap Dani in. Aster’s film utilizes vocal exhalations and group singing to invoke a terrifying soundscape, one that sticks in your head longer than the May Queen dance.