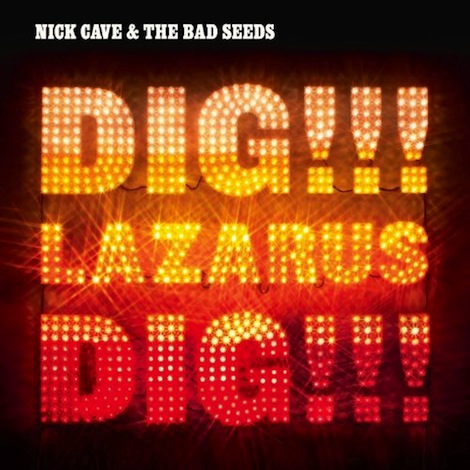 So begins Nick Cave’s opening lines on Dig, Lazarus, Dig!!!. Where Abattoir Blues and The Lyre of Orpheus shot out with uproarious gospel-like anthem “Get Ready for Love,” and Nocturama and No More Shall We Part each led off with melancholy piano based numbers. Dig welcomes us with the hilarious and wickedly cool resurrection tale of Lazarus. Cave trades in his mad man preacher vibe for ringleader of the elegant ruffians better known as the Bad Seeds. He’s a post-modern lyrical gunslinger in a corporate gangster world. Instead of committing acts of indiscretions, Cave and his band of Bad Seeds create an atmosphere of mayhem and beauty.

Nick Cave and the Bad Seeds are one of the most dynamic bands of our time, and their latest set of songs does nothing to dispel that. That being said, Dig, Lazarus, Dig!!! might not be the most immediate candidate to convert newcomers to the Nick Cave camp, though that’s not necessarily a bad thing. Dig is the next step in a sonic journey that began in the seeds of Cave and Warren Ellis’ side project Grinderman. I like to think that band’s grimy roots came out of Cave’s foray into screenwriting, which yielded the explosive screenplay for the bloodbath western The Proposition. That movie told about the horrific crimes committed by the Burns brothers’ gang, and the remnants and themes of this storytelling made their way into the Grinderman project.

It’s easy to hear the spirit of the Grinderman album injected into Dig. Gone are the piano-based and violin-tinged love songs of Bad Seeds yore. This is a more of a plugged-in, cranked-up, adrenaline-surging direction for Cave. His voice has grown more confident and animated. He sounds like he’s having a blast while singing, slithering from line to line. Cave’s electric organ takes center stage on “Today’s Lesson” as he sings, “We’re gonna have a real cool time, whoo!” You can feel Cave shaking and dancing while he sings these jagged lyrics.

The Seeds put on a Doors-like pose on the strange yet twisted and modern psychedelic funk twitches of “Moonland.” The way Cave whispers “I’m not your favorite lover” even carries a trace of Jim Morrison’s Lizard King posture. Dig seems to consist of adventures of lost souls who seem out of place in modern society. We have Lazarus from the lead track and then the lonely lover of “Moonland.” It’s also hard to forget the frightened wanderer in the creepy “Night of the Lotus Eaters.” With lyrics like “The dragons roam shopping malls/ I hear they’re gonna eat our guts” and the electric loops and guitar wails, it feels like a track fit for George Romero’s Dead franchise.

One of the greatest moments on Dig is “We Call on the Author to Explain,” a very noisy and riff layered anthem in which Cave takes on the role of fan and critic asking his favorite author to explain the meaning behind his words. It’s a very ironic number that has Cave spewing out some of his most explosive lyrics like “It’s fucked up/ he’s a fucker, but what an enormous and encyclopedic brain.” The thing that Cave masters on Dig is the perfect merger of the lifted lines of classic mythology with the lyrical slang of every day life.

Listen for the Western-influenced “Hold on to Yourself,” featuring some noisy sound effects in the background, as well as Cave’s Manzarek-like organ layered throughout. “Hold on to Yourself” continues the album’s theme of the outcast, calling to outsiders to not lose their individualistic spark in what Cave calls this “life and fire and lunacy.” And with the line “I walk into the corner of my room and see my friends in high places,” Cave opens “More News from Nowhere,” a reminiscence of strange past flames with names like Janet, Betty, Miss Polly, Alina and Deanna. The obvious link could be that these are all ex-partners, but just as likely they were all sources of inspiration for many of Cave’s songs (like, for instance, “Deanna”).

Dig, Lazarus, Dig!!! is another explosive entry into the Nick Cave’s extraordinary musical canon. The Bad Seeds sound reenergized in this new electric incarnation, plugged in and going deeper inside their universe of chaos and disorder. It’s a wonder to hear the unimaginable beauty and horror of it all.