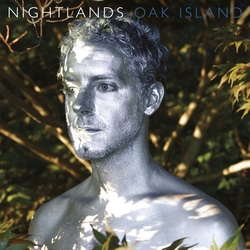 Philadelphia singer-songwriter Dave Hartley is something of a jack of all trades, musically, having played instrumental roles in a good many bands from the City of Brotherly Love, most notably the roots-gazer rockers The War on Drugs. This versatility plays into his solo project, Nightlands, in which he’s the creator, writer, performer and only permanent figure. It’s an outlet not just for his songwriting but his atypical recording techniques, concepts and ideas. On the surface, his new album Oak Island comes across as a mellowed-out, streamlined, `80s-bound collection of studio pop, but there’s some freakier stuff going on behind the scenes.

The first clue is the album art — Hartley, painted silver and surrounded by tree branches, appears like some unfinished animatronic Caesar, stately but inhuman, pristine but detached. This weirdly cybernetic image of Hartley is an approximation in visual form of what the album sounds like. It’s a lush record of beautiful arrangements and perfect, sometimes space-age production, caught somewhere between a warm, sunny beach and a laboratory. Hartley took measures like layering his voice over and over again to strange extremes, making himself sound less like a chorus of voices than one solitary, extra-terrestrial humanoid.

Nightlands’ meeting place between beauty and detachment is an accessible, even enjoyable convergence, but one that still lends itself to alienation, and feeling, well, alien. To hear Hartley sing “You’re my baby” on the track of the same name, there’s very little sense of romantic attachment or adoration. There’s regret, perhaps, but at a distance. And his choir of the ethereal seems extra ghostly on “Born to Love,” a track that’s made contrastingly lush via shimmering guitars and Bacharachian touches of trumpet. Only when the tempo picks up, as on “I Fell In Love With a Feeling,” does Hartley veer back to a corporeal, flesh and blood version of himself, touched up with just a little in the way of odd effects.

Throughout Oak Island, there are recurring ideas of loss, heartbreak or detachment, and Hartley’s sonic treatments reflect that to the point that losing touch with someone else sometimes means feeling lost or disconnected from yourself. Maybe not in space, necessarily, but the idea Hartley pursues on Oak Island is a novel one, and a pleasant listening experience at that.

Video: Nightlands – “I Fell in Love With a Feeling”