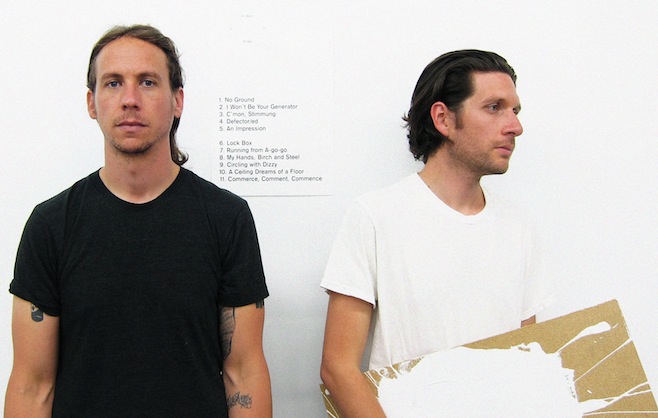 Sub Pop announced via a postal delivery campaign (which we really only knew about because of Sub Pop’s Instagram) that No Age is releasing a brand new album in 2013. An Object, the band’s follow-up to 2010’s Everything In Between, is out Aug. 20 via Sub Pop.

The album was recorded at Gaucho’s Electronics in Los Angeles by Randy Randall and Dean Spunt, with collaborator Facundo Bermudez. The band created the album packaging with designer Brian Roettinger, and said in a press release, “The band has performed, recorded, produced, and prepared and assembled the entirety of the physical packaging of An Object, including jackets, inserts, and labels, taking on the roll of manufacturer, artist, and musician until the roles trip on themselves and individual parts lose their distinct meanings, demanding to be considered as a whole.”

1 No Ground
2 I won’t Be Your Generator
3 C’mon Stimmung
4 Defector/ed
5 An Impression
6 Lock Box
7 Running From A-Go-Go
8 My Hands, Birch and Steel
9 Circling With Dizzy
10 A Ceiling Dreams of a Floor
11 Commerce, Comment, Commence

No Age announce new album, Snares Like a Haircut