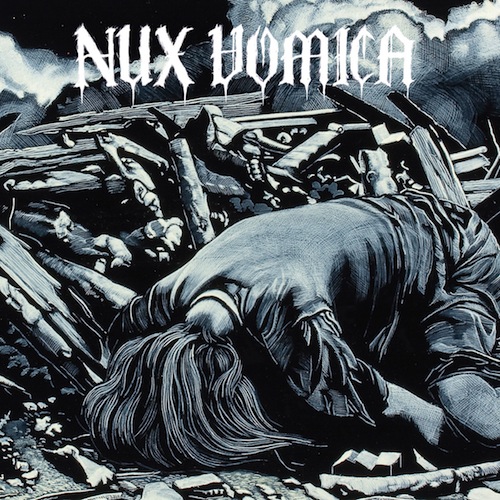 The shortest track on the new, self-titled Nux Vomica album is just a few seconds shy of 12 minutes. For a crust-punk band, that’s ridiculously massive — length enough for six Discharge songs, four by Amebix, or somewhere in between for the likes of Tragedy or Disfear. But crust — just like any and all hardcore or metal subgenres to survive past the fall of the Headbanger’s Ball — has long shed anything resembling tradition. The two-minute d-beat detonations and one-two-fuck-you chaos? They’re not terribly hard to find, but in the decades since Discharge first put a steel-toed boot up hardcore’s keyster, crust has been sculpted and molded into shapes far more colossal than originally conceived. It’s no longer the oldheads’ ideas of liberty spiked anarchy that represents the crust of today; it’s the dark sludge of Boston’s Morne, the sprawling sonic assault of the UK’s Fall of Efrafa, and the apocalyptic epics of Portland’s Nux Vomica.

Nux Vomica’s self-titled Relapse debut only occasionally displays any obvious kinship with their 1980s UK forebears. Those seeds have given rise to a hardier hybrid — a variation on hardcore and metal that’s heavily invested in composition and craft. Not that I’m suggesting the face-ripping tracks on Hear Nothing, See Nothing, Say Nothing aren’t classics; far from it. With Nux Vomica, however, there’s a greater attention to detail and an aim for a sound that sprawls far and wide, containing both more stylistic range and a healthy respect for melody. With a total of three tracks adding up to a sum of 45 minutes, there’s no mistaking any of the songs on Nux Vomica for singles, but that doesn’t mean that these compositions are without hooks, or — dare I say — beauty.

The gentle ring of guitar that opens “Reeling,” without proper context, could be easily mistaken for a track by the group’s fellow Oregonians in Agalloch. And it stays that way for some time, gradually rising into a heroic lead and a dense, plodding chug of sludge. But rather than exploding into blast beats, the band eases back into a dramatic cascade of power chords, scoring Just Dave’s screeches of true-life struggle and “a life polluted by the weight of the world.” By contrast, the bombastic intro of first track “Sanity is for the Passive” explodes with all the manic fury of old-school ’80s crust, rumbling toward a melodic gallop. It’s raw, even downright gnarly, but it soars — engineered for the pit, but mighty enough to provide the soundtrack for a chase scene starring the Four Horsemen of the Apocalypse. Oh, and just a few seconds before the 2:30 mark, the d-beat starts up, and sets the track up for a lengthy race toward oblivion.

Nux Vomica’s brand of crust comes more out of texture and aesthetic — and socio-political politics — than of a strict adherence to any particular set of guidelines. The bassline that opens the 19-minute “Choked at the Roots” might draw a parallel to Amebix’s Arise!, but there’s a lot more in common with psychedelic sludge happening in the first few minutes of the song. And that’s what makes Nux Vomica not just interesting, but extremely vital. It’s easy to make music this loud and intense sound powerful, but it’s not as easy to make it accessible, particularly when making Neurosis songs seem short by comparison in the process. Nux Vomica take the ambitious tack of attempting all of the above. And the kicker? They pull it off.