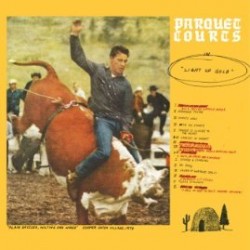 “Socrates died in the fucking gutter”

“Master of my Craft,” the indie punk romp from which this line comes, and which opens Parquet Courts‘ Light Up Gold, pretty well displays the main concern of this record: the starving, suffering artist. But despite the sincerity of the group’s backhanded messaging, they carry a tinge of modern apathy with a sound somewhere between the Feelies and the Strokes — “thread counts – high / commissions – high / hourly rates – high / a minute of your time? / Forget about it,” sings Andrew Savage on the opener, with the last line drawled out as if he has already turned a shoulder and is walking back to the melody. From there, you’re either hooked or you’re not, as is often the case with organized chaos.

More than half the tracks go under the 2:30 mark, and aside from the centerpiece of the album, “Stoned and Starving,” it’s often hard to distinguish tracks from one another. You’d be hard-pressed to keep up, but that doesn’t really matter; you don’t need to understand the words to dig their sense of immediacy, but once you do, a charming edge gives it staying power. “Donuts Only” starts with a rhythm straight out of “Beat It,” only to be dismantled by a manic guitar riff and irreverent vocals that declare, “I’ll reserve my highest Hosannas for the communion song served with light beer,” and, “In result, his life was rubbish / celebrated? Yes, but rubbish.” All in less than one minute and 30 seconds.

Parquet Courts want to be responsible for that communion song. They want to bring together choruses of hipster “fuck-it”s and spread the smell of stale cheap beer, and they reserve no expectations or visions of grandeur. This isn’t terribly original as an ethos — not to mention they’re from New York and let it show at times. But what is refreshing is how infectious, smart and good they make that fuck-it attitude feel — think Talking Heads crossed with Jonathan Richman.

Another short track in the middle of the record, called “Careers in Combat,” is a list of jobs disappearing due to what may best be described as the ruinous human existence — “There are no more art museums to guard,” “There are no spots left for park rangers / cause there are no bears left to save you from” — before ending each stanza with, “But there are still careers in combat, my son.” Subtle and sarcastic, but scathing nonetheless. After that, the most poignant sociopolitical commentary of the album arrives with the mesmerizing “Stoned and Starving,” which reinforces apathy: “I was debating Swedish Fish / roasted peanuts or licorice / I was so, so stoned and starving / I was holding some wadded bills / I was reading that smoking kills / I was so, so stoned and starving / I was walking through Ridgewood, Queens / I was flipping through magazines / I was so, so stoned and starving.”

On “Caster of Worthless Spells,” Savage plays a Malkmus-like game with the lead guitar, hopping on and off its meandering melody within line after line until it all comes together for the chorus. And later on, “Disney P.T.” consists of an uptempo list of “My girl is…” quips only to end each verse with “You have been getting lots of similes, but I / Want your disease.” It’s such simple songwriting, yet it rewards repeated listens, for beneath the indie pop grunge aesthetic is a group oozing with earnestness.