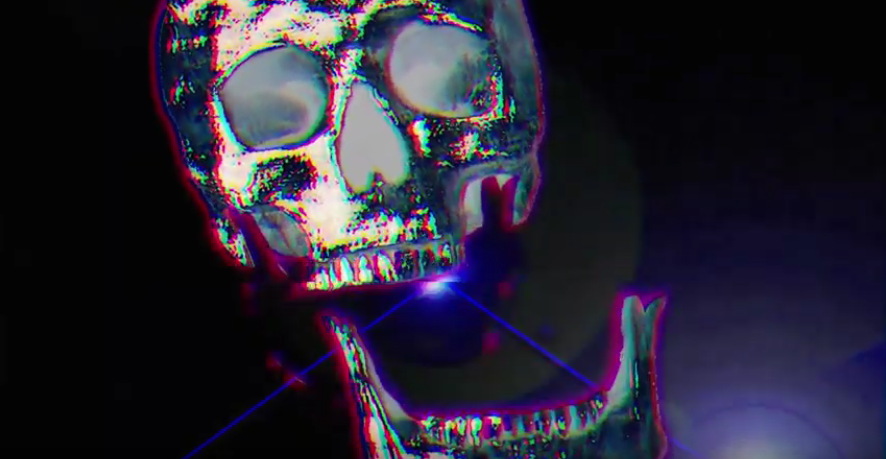 Forest Grove are a San Diego-based trio that blends punk rock attitude, thrash-metal riffs and a sci-fi/horror theatricality to create something weird and insanely fun. And Treble is premiering a new video from their self-titled debut album, released in 2018. The clip for “The History of Fuck You,” directed by the band’s drummer, Ryot, is a lo-fi, sci-fi ’80s VHS/video game nightmare with some hilarious easter eggs.

Here’s what Ryot says about the video: “‘The History of Fuck You’ is our most pissed-off song, so I wanted the video to be visually destructive, but still Forest Grove—a mix of sci-fi, horror, and what teenage dirtbags in the ‘80s might draw on their Pee-Chees. I thought it’d be fun to imagine how we’d perish at the hands of said ’80s teenage dirtbag. The whole thing’s DIY with a budget of zero: we used my old Canon Rebel T2i and filmed in our practice space, in front of a piece of green fabric Zeno had kicking around. I spent about a month editing and applying effects to what is essentially a two-minute clip.“

And vocalist Rocket added this about the song: “The first verse is: ‘Witness all the things that we’ve done, Watching from the back of the screen, Golfing through the green and white hills, Now we’re gonna make the Earth bleed.’

This song is about the destruction we are raining upon the planet, specifically how we are watching it happen as if we’re removed from the situation or consequences. Golfing is mentioned here because it is a my personal favorite example of total decadence – water wasted on keeping grass green and using large expanses of land to hit little white balls into holes. The whole song is about destruction. The rest of the album hints at this in different ways, like in Melter I talk about eating rotten meat, because meat is the old flesh of animals that have been killed and dead for several days before the meat gets on your plate. It’s pretty gross when you think about it. Especially ground meats – a bunch of mixed up flesh of multiple dead animals mashed into little patties. Gnarly. History of Fuck You is the strongest expression of disgust and rage at our human race. Not calling others out, but myself/ourselves. Expressing guilt at existence and destruction.”

Rocket and guitarist Zeno also perform as The Dabbers, who provided the theme music for our podcast, The Worst Song.