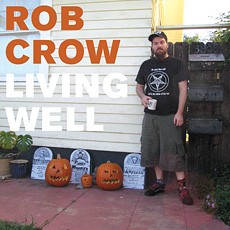 Originally, I think I started listening to Pinback because I had an internet-abetted crush on a boy who liked the rational and apocalyptic mathematics fretted by the hands of Zach Smith and Rob Crow. Then it was probably onto another boy who preferred the terse metal of Crow’s amusingly-named Goblin Cock. Or another one who was into the more obscure stuff like Heavy Vegetable or Optiganally Yours (which, as it must be noted, had a sound centered on the celluloid trills of the Mattel-marketed optical organ, or Optigan, entirely tawdry and cruddy and ’70s-cool.) Ah, boys and their bands.

Rob Crow is not the center of so much attention for undeserved reasons. He is a prolific guy and Living Well, as its title might smugly imply, is an album that sounds as though the person making it is very comfortable. The third solo release from this side project multi-tasker, these particular songs seem to come conveniently to Crow, as though he can just crank them out on a coffee break and fans of his style of cold pop will collectively gasp over his easy ability to craft the rolling, shifting dirges that already sound so familiar and comely to our ears. The fact that Living Well is home-recorded and even copyrighted under the eponymous “Robcore” just adds to the sense that this album is assuredly Rob-centric. As it reels the songs out, one through fourteen and mostly brief, there really are no surprises. Instead, it’s a clean agreeableness that, for fans who debate which Crow project is the better while swooning over them all, again makes clear that the man is succeeding at seducing us.

Leaving behind some of the silliness from his previous solo release My Room is a Mess, an album unashamed of its short stints of meta-nerd near-raps about Obi Wan, Living Well does not stray too far from Pinback’s best-tested material, though the drum fills, organic or electric, can swell beyond that band’s early, metronomic compositions toward a welcome, tribal groove. The track “Burns” has Crow slithering through a mist of ventilator hissing, his voice detached over a snaky guitar riff while “Ring” knells a creepy music box chime that has him crooning a kind of faraway sing-song proceeded by raspy chanting over machine-fed high-hats. It’s a baiting rubric and his skill at manning all the devices and cooing out the various moods is ample. But still, somehow, Living Well remains pretty tame, as though Crow’s diligence as a musician is not really a necessity but a way to pass the time. This slouching distinction is kind of a turn-off.

Yet when I said Crow was seducing us, I meant that he can still wield his profuse tricks with smoke and mirrors. The album has its hot and its lukewarm tracks, but the listener must be inclined to forgive any lapses because, shit, it’s Rob Crow and it’s not too shabby. It is also exciting, mundane, alluring and plain all at once. Reminds me of all the boys I’ve ever crushed on.