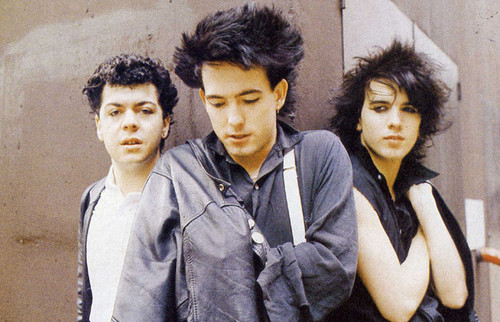 It’s entirely fitting that Rhino records released the Deluxe Edition of Three Imaginary Boys by its lonesome and then released the unofficial ‘goth’ trilogy that followed one the same day. I put goth in quotes because of the ongoing and somewhat tiresome debate that the Cure fall into that category, whether they indeed started the whole thing, and if anyone even cares. My point about the release scheduling is simply that the band’s first album was rooted in a post-punk style of guitar rock while the following three albums, Seventeen Seconds, Faith and Pornography respectively, were sparse, drawn out, cold and dark affairs that allowed frontman and figurehead Robert Smith to expand upon his musical talents, finding new sounds and a new direction.

Rather than capitalizing on the alternative radio-play friendliness found in songs like “Fire In Cairo,” “Jumping Someone Else’s Train” and “Boys Don’t Cry,” the Cure veered off into a direction which they would at least tangentially follow for the remainder of their career which, by the way, is still going strong. Smith strove to find a balance between disparate records in his collection that he loved such as David Bowie’s Low, Nick Drake’s Five Leaves Left, Jimi Hendrix’s Isle of Wight, Van Morrison’s Astral Weeks and Khachaturian’s Gayaneh Ballet Suite. The time of the recording of their sophomore album also marked the first collaborations with on and off and finally on again for a long time bassist Simon Gallup. In an effort to see if he would gel with the band, Smith and Gallup played in side project Cult Hero with local postman Frank Bell on vocals. Their single and b-side “I’m a Cult Hero” and “I Dig You” appear on the second disc of the reissue for completists. This year also marked the beginnings of Robert Smith’s long-time collaborations with fellow ‘goth’ band Siouxsie & the Banshees, playing guitar for them on tour. Seventeen Seconds, despite the departure from mainstream rock, actually charted better than its predecessor in the UK thanks to the success of first single, “A Forest,” still as listenable today as it was in 1981. With the release of Seventeen Seconds, the Cure became synonymous with moody and atmospheric rock, creating a niche for themselves and for numerous others to follow. Other bonus tracks on the reissue of note include live `audience participation’ versions of the Cult Hero songs listed above, and live versions of the album tracks including a fantastic rendition of “A Forest.”

Faith picks up where Seventeen Seconds leaves off, albeit without keyboardist Matthieu Hartley. The band soldiered on as a trio, but could not successfully nail down a third album despite time and effort. With drugs flowing and depression growing, the band were finally herded by label head Chris Parry and guided to the album’s completion. “Primary” was one of the first songs to be fully finished and ended up to be one of the band’s most successful early singles. Everything about Faith seemed to evoke a depressive state, from its shades of grey cover, to its funereal dirge-like songs (one even called “The Funeral Party,” with others called “All Cats are Grey” and “The Drowning Man”), and its origins in frustration and the depression of trying to capture feelings of belief. With this album’s release, the band was well on its way to capturing the sound that would characterize their music for years to come. Non-album single “Charlotte Sometimes” is indicative of the era on the horizon and is included in this package. Other rarities include more demo, out-takes and live versions.

Pornography marks a pop-culture moment in history as the first album for which Robert Smith’s hair became a creature all its own, and began to smear lipstick all around his pasty mouth, eyeliner caking his oculars. Smith intended Pornography to be the Cure’s last album, a ‘fuck-off’ record that would leave critics and fans disturbed. But like the albums before it, it outsold its predecessor, peaking at number eight on the UK charts, the first to break the top ten. The more the Cure experimented, the more popular they became. Songs having to with serial murder, sociopaths, paranoia, madness, darkness and depression abound on Pornography, and in England of 1982 this seemed to go over quite well. Unfortunately, tensions between Simon Gallup and Robert Smith began to arise and after the subsequent tour was over, Gallup left the band and the two would not speak again for the next 18 months. The tour was spotted with fist fights and one last set that featured Smith on drums, Gallup on guitar, Tolhurst on bass and a roadie on vocals. The faithfuls must have been somewhat peeved at that one, and it must have been, to some and especially to the band, that it was probably the end of the Cure as most people knew it. We now know this not to be true as the band, sans Gallup, recorded several successful singles that ended up to be collected on the now legendary Japanese Whispers. Even though Smith continued collaborating with Siouxsie, even forming side band the Glove with Steve Severin, the Cure soldiered on. Gallup returned to the band for The Head on the Door as other members came and went.

The next few years would hold massive exposure and pop success in store for the Cure, but it was the unofficial trilogy that has been faithfully (no pun intended) remastered and assembled by Smith and the good people at Rhino that would shape and form the music of the evolving band. Whether or not you believe that the Cure ‘invented Goth music,’ one has to acknowledge the darkness evident on all three albums. Like the famous picture of the fish crawling out of the muck and eventually changing into a land walking creature, the Cure’s music from 1980 to 1982 gradually evolved into a signature and long lasting sound that cemented the band into rock history. They began with post-punk pop, then with these albums delved into creepy soundscapes, only to meld the two on subsequent releases to create in capital letters, THE CURE. A lot of the bonus tracks on the three album rereleases are inconsequential for most, save collectors, but the remastered tracks and packaging alone make for a great buy. As my listening of the Cure began with Three Imaginary Boys back in the day, I am not sure how I somehow missed these three albums. My Cure collection picked up with Head on the Door, but thanks to Rhino I got the chance to fill in the gaps. To Cure fans this is heresy to not own the `trilogy’, but what do you want from me? I was only nine! Had I owned these albums then, I can only picture myself as being much more disturbed than I already was. It will be interesting to see what the next reissued albums will be if still released in groups of three. If traditional albums, they would be The Top, Head on the Door and Kiss Me, Kiss Me, Kiss Me, but it would be a shame to skip over Japanese Whispers and Concert. The former order would set things up nicely for possibly one of the best albums of all time, Disintegration, while the latter would lead things up to the commercial success of Head on the Door. Either way, I’ll be one of the first in line at the record counter.