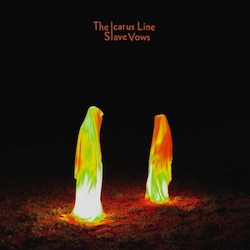 The Icarus Line always seems to be precariously close to breaking out. From their earliest associations with Buddyhead, who hyped the shit out of the group to a nearly unreachable status, to some of their more recent sojourns, opening for legendary groups like The Cult and Killing Joke, The Icarus Line have been primed to take over rock ‘n’ roll for some time. But numerous lineup changes over the past 15 years (including original guitarist Aaron North’s departure for Nine Inch Nails) and drastic stylistic shifts have had negative effect on the band. With their new album Slave Vows, The Icarus Line show flashes of brilliance that have been there all along, but the overall result is a letdown.

Consistency has never been a strong suit for The Icarus Line and Slave Vows is certainly no exception. The band’s last record, 2011’s Wildlife, saw the group delve into a decidedly funkier, classic rock-inspired territory. As strange as it may have sounded to longtime fans, Wildlife was certainly some of the most accomplished songwriting for both frontman Joe Cardamone and the rest of the band. But instead of running with what worked so well on that album, the band seems to take a few steps back on Slave Vows. The shift in structure is immediately apparent with the feedback-drenched album opener “Dark Circles” which lasts for nearly 11 minutes before abruptly ending before the song fully develops.

The strange evolution of “Dark Circles” doesn’t really set the tone for the rest of the album to come. Tracks like “Don’t Let Me Save Your Soul” and “Rats Ass” sound more like the aggressive punk rock the band started out playing, while the first half of “Dead Body” is easily the most psychedelic the band has ever sounded, with plenty of reverb to go around. The effect feels especially strange and out of place, knowing the power that Cardamone possesses vocally. But there’s the rub with Slave Vows — there is very little direction to the record, unless you consider the ungodly amounts of feedback throughout. If the band was going for a more live sound instead of the glossy sheen of Wildlife, they succeeded. That being said, the feedback in “Marathon Man,” “Laying Down For The Man” and parts of most other songs renders their power useless. It’s a great effect in a live setting, but sitting down for 45 minutes to have your ears destroyed in your living room is not fun.

With the newest chapter in their discography, The Icarus Line sound like a band in the middle of an identity crisis. Instead of moving forward with some of the fun sounds they began to develop on their last few records, they went backward and got louder instead of better. Songs from Slave Vows will probably be fun as hell to hear live, but sadly, don’t translate on record. Multiple lineup changes and changes in sound may have hindered The Icarus Line in the past, but it’s their return to noisy, violent art punk that’s really set them back this time.