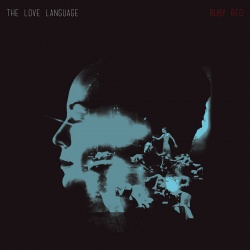 Stuart McLamb, the sole full-time member of The Love Language, recently divulged a secret about himself. “I can definitely overthink stuff,” he said, discussing the just-released Ruby Red. I’ll elaborate: The Love Language recorded the album in a flurry of enthusiasm and anticipation in 2012, and then listened to the finished product en route to SXSW that March. What they heard wasn’t what they wanted to share with their fans. They scrapped it and McLamb and producer B.J. Burton redid the entire thing over the next year with the help of 21 musicians in four states.

Ruby Red is no replica of the chipper, artfully crafted Libraries and it’s definitely not the glorious lo-fi, shimmering wall-of-sound splendor of the band’s self-titled debut. It would seem that McLamb carefully avoids ground he’s already tread. Metaphorically speaking, McLamb is an architect. He builds the structure first and then partitions the interior space with lyrics once he’s familiar with the design. On Ruby Red his singing never falls short, always evocative and attuned to the energy of each song. He wields it like the instrument that it is, grinding it into a growl, rounding it into oohs and aahs, flattening it into a blade and slicing through lyrics fattened up on emotion.

“Calm Down” opens the ten-track album with an aggressive, driving drum beat interlocked with a solid bassline. Resplendent vocal harmonies, sunny keys and lyrics about never looking back push the song energetically forward. “Calm Down” is a stained-glass cathedral on a bright summer day. It oozes new starts and the lust for life summer brings. But still there’s something narrow and small in the scope of it, a subdued quality amidst its blustery angst, some remnant that hearkens back to the basement recordings of The Love Language.

“Dead in my tracks/In mid-November/And all the words have blown away,” McLamb growls in “First Shot,” which deals with his own artistic block. It rocks and heaves, showcasing McLamb’s workhorse side. Fat and dirty guitars trundle along, bouncing off a sonic prism of driving, tightly pocketed drums. There are catchy vocal hooks, synth solos and soft string interludes reminiscent of early Arcade Fire.

As a whole Ruby Red is an exploration of the larger musical voice of The Love Language. It wanders through a myriad of styles, demonstrating influences ranging from the later Beatles on tracks like “Pilot Light,” spanning forward to moodier ’80s bands like The Church and The Cure with offerings like “On Our Heels,” “For Izzy,” and “Golden Age.” Lyrically, McLamb remains ethereal and unattached, hinting at love, relationships, and desire though never turning toward it fully.

We know McLamb demanded perfection from his third album. Working in tandem with producer/engineer B.J. Burton, he managed through second-guesses, writer’s block, touring, and general life interference to stretch the time between Libraries and releasing Ruby Red to a staggering three years. In a way, the wait was worth it. If not because the final product shattered our expectations and gave us something rivaling both The Love Language and Libraries, then because the evolution of McLamb as The Love Language promises so much more.