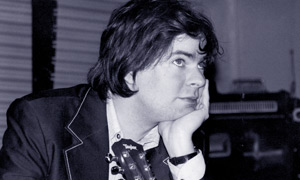 Although all the molecules of the entity called Jon Brion are contained in a single human form, for the purpose of categorization there are really three
Jon Brions: there’s the one who arranges whimsical, staccato little instrumental pieces (his distinctive scores for Punch-Drunk Love and Eternal Sunshine of the Spotless Mind), the one who oozes sentimental, elegiac pop ballads shot through with Brian Wilson and Billie Holiday (“Ruin My Day” and “Trial and Error”), and then there’s Jon Brion the virtuoso mad scientist, a mop-headed character with the bright eyes of a child who makes a living playing with his favorite toys, hopping around the tiny stage at Largo in Los Angeles (where he’s held a weekly residence for over eight years) from instrument to instrument, building up and breaking down an impressively wide-ranging primer of 20th century pop (from Cole Porter and Les Paul to Cheap Trick and Nirvana), spinning knobs and stomping pedals of modulation and distortion, striking the exposed strings of his prepared piano, fingering tiny melodies on a tiny Casio keyboard, instigating shiny happy audience sing-alongs, indulging in between-song “lulls” and wry observational banter, equally adept at picking Hawaiian slack-key guitar as he is programming beats and feedback loops, as comfortable sitting in with a traditional bluegrass trio as he is jamming with a confused mariachi trumpeter who happened to be walking by Largo at the wrong (right?) time.

I haven’t heard the Hollies’ recording so I could be wrong, but I’m gonna stick my neck out and say that Brion’s version probably bears little, if any, resemblance to the original. Ostensibly (or maybe occasionally) it’s a pop song, but it’s far too manic and odd to ever really qualify as such. This is, of course, Brion’s quandary in a larger sense – his debut album was dumped by Atlantic because they couldn’t find an appropriate demographic to market it to (the new Brion-produced Fiona Apple album is presently undergoing similar problems).

The man himself jokingly stated he shouldn’t have been allowed in a studio after recording this track, but for the duration of the song (and Brion’s shows, and whatever trajectory his career may take) let’s forget about the business world’s need to analyze and categorize, and let’s forget about the critic’s need to do the same (this of course divests me of having to write anything more about it), and let’s just say that if you’re making music and you want to throw in a synthesizer’s full range of effects, or a bed of warbled static noise, or twenty layers of overdubbed harmonies, just for the hell of it, you can, and though the end result may be wacky, self-indulgent, and stylistically all over the map, if you do it right, it might be all the more brilliant for it.