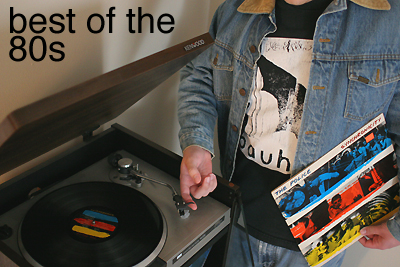 It wasn’t cool to be listening to country music in the ’80s, particularly if you were part of the punk rock underground in the UK. Always ones to cause trouble, the Mekons said “balls to that” with Fear and Whiskey, a raucous, dizzying blend of punk rock’s fuck-all abandon and country music’s tradition of storytelling and barroom singalongs. That the first true alt-country album was released by a group of Brits may seem unlikely, even somewhat ironic, makes it all the more compelling. – Jeff Terich

Rum, Sodomy and the Lash is filled with songs which are poetic and visceral, some both simultaneously. They are filled with vivid characterization and the hazy recollections of memories, which have aged like ancient photographs. Mostly, Rum, Sodomy and the Lash reminds one again and again of the very real talent possessed by Shane MacGowan, both as a writer of songs utterly his own, beautiful and ragged, and an uncannily evocative singer. He is able to write a character of mythical proportion, Cuchuliann, into a riotous stomp which takes place everywhere, full of characters drawn from everywhere; able to color Ewan McCall’s “Dirty Old Town” with a vibrancy and brilliance all his own. – Tyler Parks New Day Rising is the best pop record a hardcore band has ever made. An odd statement considering the almost vitriolic power behind hardcore. But that’s what makes New Day Rising, and Hüsker Dü in general, so utterly exciting. That a band could be fueled by this almost punishing power, yet still have a strong melodic backbone to their songs, even if said melodic backbone is draped in fuzz and pushed by an intangible force. – Molly B. Eichel Low-Life is a testament to the ability of the remaining members of Joy Divison to pick themselves up off the floor and begin in a different direction, while having recognized their starting point. It’s probably fair to say that if I hadn’t heard “The Perfect Kiss,” and thus Low-Life, I would not be listening to all of the music I listen to today, and for that, I owe the album a debt of gratitude. – Terrance Terich

For a band that switches lineups as frequently as The Fall does, it’s astounding that they released essentially an album a year in the ’80s, peaking with their seventh, This Nation’s Saving Grace. Eschewing the schizophrenic sloppiness of early records for a more streamlined post-punk sound, Grace was a sort of new and improved Fall, not the least of the factors involved being new guitarist Brix Smith (Mark E’s then wife). Mark E. Smith would later tear her to shreds in a song titled “Sing Harpy!” `Tis a shame, this was their finest hour. – Jeff Terich

After the critical acclaim of their 1984 album, Let it Be, the band had two options at that point in their career: succeed and take their place in the pantheon of rock gods or fail and head back to Minnesota to wallow in obscurity. “Time for decisions to be made. / Crack up in the sun, lose it in the shade,” Paul Westerberg sings on opening track “Hold My Life.” It’s the fear of both paths that allows the `Mats to churn out some of the strongest songs of their storied career. – Molly B. Eichel After Pornography, things got weird for The Cure. Performing as a duo, recording with musicians for hire and releasing the most bizarre album of their career while Smith performed with Siouxsie and the Banshees, it took three years before they would be a full-fledged band again. Revamped and brimming with energy, The Head on the Door would find the band returning as a five-piece and with a solid set of songs that would rank among their best. And with melodies as bright and sunny as “Close to Me” or “Six Different Ways,” you can almost imagine Robert Smith smiling. Almost. – Jeff Terich

Whereas Morrissey is a fan of dark poetry, nihilism, and has a philosophical viewpoint supporting his loneliness, his fans, including me, were sad and lonely for different reasons. We were teenagers. As Bart Simpson said, “Making teenagers depressed is like shooting fish in a barrel.” If there is one similarity, it is this: like Morrissey, most of the teenagers who listened to him wanted to be alone. I craved solitude, lived in my own head, and colored the world accordingly. Morrissey seemed to really understand the mind of the depressed teenager. He understood those suicidal thoughts, whether serious or for dramatic purposes. – Terrance Terich

Inspired by acts as diverse as the Velvet Underground, the late ’60s girl group The Shangri-Las and Phil Spector’s sonic walls of sound, the Scottish-born brothers William and Jim Reid (the core duo behind The Jesus and Mary Chain) blended anarchic feedback with pretty, fledgling shoegazer on their debut album, appropriately named Psychocandy. The title perfectly captures the sugary hooks, the semi-goth gloom and the shrieking guitars that epitomize The Jesus and Mary Chain’s trademark brand of noise pop. – Hubert Vigilla

Rain Dogs is a patchwork theme album. Listening to it, one can become immersed in shady, rain dripping alleyways, seeing staggering drunks passing you by in dim lights, smelling the rum on their breath, and then emerging onto the cobblestoned 17th century pirate-infested streets of New Orleans. No one else would do such a thing and I’m not sure anyone else actually could. – Terrance Terich

The Waterboys – This is the Sea (Chrysalis)

This is the Sea was all about themes. Love, spirituality, politics, and an overall theme of change stretch throughout the album. Mike Scott writes at length about the massive undertaking that went into This is the Sea in the liner notes for the deluxe edition reissue, including the fact that three artists heavily influenced the result, the Velvet Underground, Van Morrison and Steve Reich. Each one taught him specific things about music that he incorporated into the final product, and each one can be picked out at specific times, but This is the Sea is Mike Scott’s, and one of the defining moments of his life. – Terrance Terich

This album was a breakthrough at the time, but can also still be played today without any anachronistic dangers. Every song still holds up today as one of the best pop records ever produced. Green, as he is simply credited in the liner notes, has a voice that one critic has stated is “eternally 14 years old.” Green’s childlike feminine voice is a wonder to behold, and coming from a guy who’s 6’6″, it’s even more amazing. Add to that some of the first sampling ever to be used in popular music, and you’ve got a recipe for an innovative record. – Terrance Terich