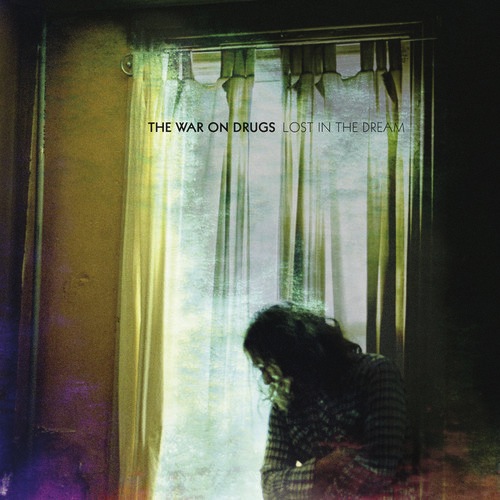 Since the release of their debut album Wagonwheel Blues in 2008, Philadelphia’s The War on Drugs have treated their album titles as a kind of shorthand for the stylistic techniques that color those very albums. Wagonwheel Blues, for instance, heavily comprised ragged and rollicking roots-rock sounds — a natural complement to the hum of tires against the highway and the whir of parched landscapes buzzing by. Meanwhile 2011’s Slave Ambient was very literally named after an effect that Adam Granduciel had engineered through his amp set-up, creating a recurrent drone that gives the album more of a dense, shoegaze feel than its predecessor. Its mix of Springsteen-esque rock ‘n’ roll songwriting and heavily layered effects even prompted Under the Radar to coin a new term for such a sonic marriage: Bossgaze.

You can probably guess, even before giving any of its 10 tracks a spin, that The War on Drugs’ third album, Lost In the Dream, is another recording whose mood and sonic make-up are succinctly summarized in those four words. That shouldn’t surprise anyone who soaked in the haze of its predecessor, which could have just as easily been called Lost In the Dream, itself. And as architects of dream-like sonic worlds go, Granduciel is a master, making even the grittiest of his tracks feel weightless. Even the album’s cover, which depicts Granduciel in his own house, looks like a hallucination.

As ethereal projections go, the ten on Lost in the Dream are epics. With three tracks spanning longer than seven minutes apiece, and the average song’s running time about twice that of those on its predecessor, Lost in the Dream isn’t an album in any particular hurry. Often Granduciel—who’s solely responsible for the bulk of what you hear on the album—will build up a dense cloud of song and hang out there for a while, allowing the listener to soak in the riches of the arrangement rather than anticipating where they might go next, even if their progression and build is more maximalist than minimalist in the grand scheme.

Settling into a groove for six or more minutes at a time only works when the songs are good, however, and Lost In the Dream features some of the best that Granduciel has written to date. In a mist of effects, in blows “Under the Pressure,” a nine-minute opening song that parallels “Waking On a Pretty Day” from last year’s Wakin on a Pretty Daze, by Granduciel’s onetime bandmate Kurt Vile. It makes the most of its lengthy running time, fleshing out its verses with shimmering guitar licks, clearing space when it needs to, but never moving too far away from its hypnotic rhythm. It could keep going, consuming an entire LP side, and still be a 10, but as it ends it gives way to an even stronger track: first single “Red Eyes.” By contrast, it’s build on a solid foundation of leslie piano and tension, breaking climactically as Granduciel lets out an unexpected “WHOO!” There’s a similar build with “An Ocean In Between the Waves,” but drawn out over a longer stretch of time, its heartland Krautrock gradually stacking even more layers over a compulsive beat. More begets more, and somehow evades ever seeming excessive.

The curious contrast of Lost In the Dream is that no matter how blissed-out The War on Drugs’ treatments are—even if in a minor key—there’s a feeling of anxiety and disintegrating hope at its center. Granduciel frequently finds himself either at a standstill, or tenuous about seeing it come to an end. He begrudgingly accepts change in “Under the Pressure,” singing, “Better come around to the new way/ or watch as it all breaks down here/ under the pressure.” And in pensive ballad “Suffering,” he’s already written off something that he knows isn’t working: “Why are we here when we’re both gonna fake it, anyway?” Even in “Red Eyes,” a sign of hope could also be interpreted as something more ominous in the line, “You can see it in the dark, it’s coming my way/ Well, we won’t get lost inside again.”

Given the apprehension that looms large on Lost In the Dream, it’s no particular mystery as to why one might choose to stay lost. Detouring through these landscapes feels much nicer than having to face harsh or uncomfortable realities. But they’re always on the periphery, creeping their way into what seems like a perfect and serene place. Sometimes it takes that added dose of bitterness and pain to provide the proper contrast that reveals just how beautiful something really is.