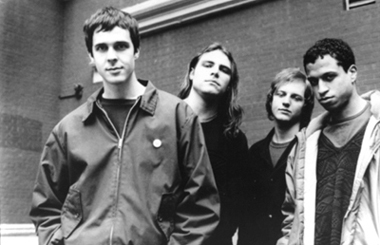 This weekend, a bunch of our favorite bands are playing for two days in Los Angeles at FYF Fest. And several of those bands – such as Quicksand, Hot Snakes and Refused – have been missing in action for quite a few years. This got us nostalgic for some of the abrasive and heavy-hitting post-hardcore albums of the ’90s, which in turn have us stoked to hear some veteran bands who know how to rock a stage better than most. So, in what may eventually turn into a two-part top ten, here are 10 essential ’90s post-hardcore albums. And for the record, narrowing this down was nearly impossible. We know what we missed, just don’t even…

The Jesus Lizard built up a pretty notorious reputation back in the early ’90s, based mostly around frontman David Yow’s whiskey-marinated yawp and propensity for dropping trou. But focusing entirely on Yow’s antics slightly undersells the ugly rawness of the band’s noise-rock churn. Beating out a sludgy and noxious byproduct of punk rock later that came to be known as “pigfuck,” The Jesus Lizard, for the first several years anyhow, stayed away from playing anything too commercial or friendly. And I don’t even mean radio friendly; some Jesus Lizard songs are outright hostile. But they are performed with a knowing grin. The syncopated stomp of “Mouth Breather” comes with an amazing punchline: “He’s a nice guy, I like him just fine… but he’s a mouth breather.” And “Lady Shoes” may or may not have had the working title “The Aristocrats.” Crude, tasteless, vile — Christ this is a great record.

The Nation of Ulysses – The 13-Point Plan to Destroy America
(1991; Dischord)

Given how high demand was for Refused and At the Drive-In reunions, it would only make sense that the single biggest influence on both bands’ sounds — The Nation of Ulysses — would be high on everyone’s wishlist as well. Not that the Washington, D.C. underground legends ever approached mainstream success. Nor did they even make it to the mid-’90s. But sometimes that which burns brightest burns fastest, in this case incendiary being a key word. The band not only played searing, confrontational and, for that matter, often quite funny punk rock songs, they did so with a uniform aesthetic, manifesto and the put-on of a domestic terrorist organization. But mostly they just railed against poor dental hygiene and stool pigeons. Still, few albums start with a bang quite as energizing as “Spectra-Sonic Sound,” and “Today I Met the Girl I’m Gonna Marry” almost made it onto the playlist the day my wife and I exchanged vows. Not sure why we didn’t stick with that idea.

I remember for a brief period back in the early ’90s when Quicksand actually could have been heard on commercial radio. Granted, the local alt-rock station was a little more adventurous back then, and the song the DJs most frequently circled back to was the band’s cover of “How Soon Is Now?” Nonetheless, Quicksand had a kind of accessibility to them that some of their peers had yet to embrace, simply by nature of being excellent songwriters. Certainly a track like “Fazer” or “Omission” destroys, but does so with hooks and something the listener can sink his or her teeth into. Walter Schreifels’ ability to intensify their melodic hardcore assault via some pitch-perfect screams made those melodies hit like a sack full of bricks, which may have been why some confused marketers labeled the group as “alternative metal.” Not so much, but we can all agree that Slip is all kinds of awesome.

While post-hardcore’s hubs were centralized mostly around the Great Lakes and Eastern Seaboard, the West Coast held its own on a smaller but certainly not any less impressive scale. To wit: San Diego’s Drive Like Jehu, who released two albums and called it a day, though guitarist John Reis and singer Rick Froberg would later continue playing together in Hot Snakes. Yank Crime, the band’s second and final album, was inexplicably released on Interscope Records (which was also home to Reis’ other, more radio-friendly band, Rocket From the Crypt… thus making it explicable), yet among its nine tracks are four vicious songs longer than seven minutes apiece, one instrumental intro, and absolutely nothing resembling a single, save for maybe “Human Interest,” which slays concisely and melodically. Commercial appeal hardly seemed to be the point, however, when the band was capable of rhythmically complex and menacingly elegant epics like “Luau.” Those churning, twisting guitar helixes go on for nearly ten minutes, and somehow, it’s not quite enough.

Girls Against Boys – Cruise Yourself
(1994; Touch and Go)

Two bass players is generally redundancy in practice, unless you plan to really own it. Get low, embrace it, get kinda dirty and sexy. Girls Against Boys took that to an even greater extreme later on, it turns out, but with Cruise Yourself, they found the sweet spot between their earlier, raw grind and later forays into more danceable industrial-goth sounds. When they rocked, as on “Cruise Your New Baby Fly Self,” they did so with both heaviness and swagger. When they wanted to get a little goofy, as on “Kill the Sexplayer,” amazingly, they turned out something even more impressive. But pretty much every minute of this stylish, dark and mysteriously cool album kicks complete ass.

Jawbox – For Your Own Special Sweetheart
(1994; Atlantic)

For how noisy of a band Jawbox were at times, particularly on third album For Your Own Special Sweetheart, the D.C. foursome wrote some of the most conventionally and surprisingly pretty songs of the ’90s post-hardcore era. The album’s one hit (sort of), “Savory,” jangles and clangs with a slow-moving rhythm and a dissonant sensibility that doesn’t lend itself well to easy digestibility. And yet, it all comes together so brilliantly, J. Robbins’ and Bill Barbot’s guitars transitioning from yin and yang sparring partners to a more fluid, harmonic convergence. It’s stunning, to say the least. They go more aggressive on “Chicago Piano” and “Cruel Swing,” play it a little more straight on “Cooling Card,” take off and soar with “U-Trau.” This is desert island disc material here.

Shellac are minimalists but not in the Terry Riley sense of the word. They just don’t have a lot of room for unnecessary fluff getting in the way of their brawny Midwestern post-hardcore crunch. Frontman Steve Albini is known for engineering work that’s clean, unfussed, but ultimately pretty damn heavy, so when it comes to his own music, it’s not just an aesthetic, but an ideal. I’m not even sure Albini uses more than one or two pedals on the whole of At Action Park, but it hardly matters. The trio’s songwriting is so strong, and their performances so intense, that sonic clarity is a must. At times At Action Park borders on post-rock territory, with tracks like “Pull the Cup” and “The Idea of North” diverting from more straightforward punches. But whether expressing restraint or going balls-out, Shellac plays it heavier than most.

At one point in time, Shudder to Think played a fairly straightforward, if more melody-driven style of D.C. post-hardcore. But then a strange thing happened — they got a major label contract. The band certainly used the bigger advance to their advantage, creating a more polished sounding effort in Pony Express Record. If anything, though, it’s far weirder than anything they ever did in their Dischord days. Equal parts Gang of Four and Queen, Pony Express Record is a labyrinthine gauntlet of jerky guitar riffs, rhythmic change-ups and Craig Wedren’s operatic falsetto. In spite of all this, however, it’s a remarkably catchy record, from the epic one-chord chorus of “X-French Tee Shirt,” to a soaring and heroic refrain on “Earthquakes Come Home” that seemingly comes from out of nowhere. For as much as STT were an acquired taste, those that acquired it were treated to something unique and refined.

Any number of friends, readers or rivals are going to tell me that this spot should be reserved for Repeater or one of Fugazi’s other good-to-outstanding ’90s albums, but those are all close runners up to this piece of heavy hitting iconoclasm. The irony of being the standard bearers for D.C. post-hardcore is that Fugazi were also the first to fuck with the formula, incorporating elements of dub, shoegazer and other styles with their meaty punk rock energy. There’s some of that here, for sure, “By You” standing as one of the most artfully dense noise rock tracks in the group’s repertoire, and “Version” reappropriates the rhythm from “Long Distance Runner” into a psychedelic remix. But even when going back to basics, like the furious “Bed for the Scraping,” Fugazi pulls it off with an effortless, yet dramatic flair.

I’ve never understood why people called Chavez “math rock.” Certainly, the New York foursome knew their way around a complicated time signature, but when applied to Chavez, “math rock” seems condescending and reductive. As far as I’m concerned, the combination of brawn and soaring rock melodies is what makes the band so uniquely amazing. Their second album Ride the Fader, which I’m loath to call it their “final” album (they never broke up, but they’ve been … we’ll say, less than prolific), is all the promise of debut Gone Glimmering crystallized into 12 brilliantly crafted and unexpectedly pummeling gems. Matt Sweeney is a surprising gentle ringleader among the more destructive moments, such as the literal-roller-coaster opener “Top Pocket Man,” or the whomping ultra-low tuned tremors of closer “You Must Be Stopped.” But I’d hate to stop here without mentioning drummer James Lo, whose nimble yet powerful skills here landed him on our 50 Favorite Drummers list.