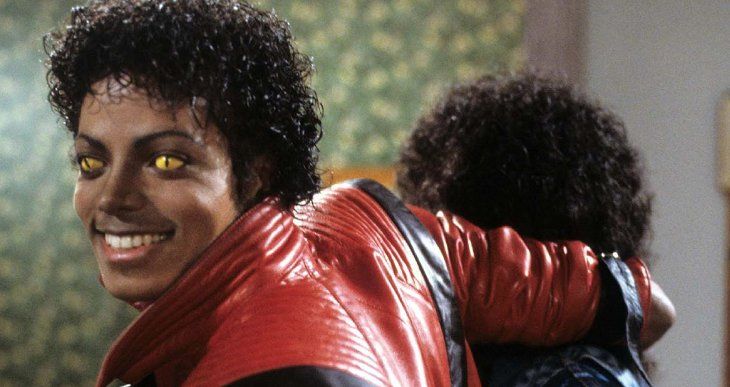 This week’s topic: Since we’re right on the cusp of Halloween, it seemed like a good time to talk about our own personal scary music stories: When has music — or a music video — given you a legitimate case of the heebie jeebies?

Adam Blyweiss: I couldn’t grow up a sensitive dude without being a sensitive little kid. One manifestation of this was that I avoided horror movies as I was growing up; they’re low on my list of things to watch even now. So I didn’t quite know what to expect when Michael Jackson‘s long-form “Thriller” video showed up on HBO. The only thing I really remember from the first time I saw it, at the age of 10, was the impression left by Jackson’s first transformation in the movie-within-a-movie. Jacko going full lycanthrope reminded me of posters and hand-stretching commercials I remembered for the then-recent feature film An American Werewolf in London, and freaked me right the fuck out. I’m pretty sure I didn’t finish that first viewing, but I do know it took me years to come back to it. On videotape. In full daylight.

Paul Pearson: I know Scott Walker’s been scaring the bejesus out of everyone from Tilt onward, but it took an especially bleak M.O. for him to come up with The Drift in 2006. One of the most brilliantly engineered albums of all time, composed almost entirely out of diminished chords and large slabs of raw meat, The Drift maintains its anxiety through a whole bloody series of long songs (technically they are still songs) that really shouldn’t be heard in the dark by anyone but corrupt social engineers. The scariest moment is “The Escape,” built on sonic touches from animated shorts of the golden era of Hollywood. There’s no telling what it’s about; my simple, probably wrong answer is that it’s a morality play about the imperialism of Walt Disney. My only backup of this assertion is the ending when Walker does an impression of Donald Duck sarcastically screaming “WHAT’S UP DOC!” over a chord you only hear when you’re being stabbed. It’s far, far more frightening than it reads on paper. I can’t watch Mickey’s Clubhouse ever again. 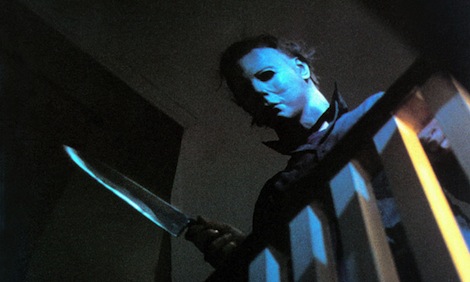 Dan Pritchett: Francis Ford Coppola said “music is a big factor in the helping the illusion of the film come to life,” and boy was he right. I don’t remember exactly when I watched Halloween for the first time, but I have no doubts my eyes were closed every time Michael Myers was about to slash his next victim. What I do remember however, (thanks to my aunt who loves to tell this story) is when I was 10 years old I went with my sister, aunt, and mother to what they claimed was supposed to be “the scariest haunted house in Illinois.” Walking to the entrance of this house of horrors surrounded by corn fields, all I could hear was a thunderous chainsaw and people seemingly screaming for their lives. I was not amused. In fact, I was petrified.  As we approached the entrance washed out in red lighting under the dark overhang, all I was hearing at this point was the Halloween theme song. I refused to go inside; convinced Michael Myers was about to emerge from the darkness and stab me to death. The music coming from the entrance provided all the terror I could handle. So while my sister and aunt risked their lives inside, my mother and I hung out in the locked car. To this day, I still think of how terrified I was that night every time I hear the iconic theme song.

Jordan J. Michael: For all intents and purposes, Richard D. James, a.k.a. Aphex Twin, is one sick dude. To make such mind-bending electronic music, the man must be ill in the head. “Come to Daddy” is the apex when it comes to menacing terror — all hammering rhythms and earsplitting feedback that would otherwise be inaccessible if it wasn’t so deliciously nasty. My first experience with “Come to Daddy” was through the CKY2K skate video. The song was scary, and Bam Margera and company did an excellent job splicing their daredevil footage with the ridiculous time signatures of the song for a four-minute montage. A while after that, I watched the actual “Come to Daddy” music video, and holy shit. That poor old woman! She was minding her business, just walking her dog, and then this blue face inside an analog TV starts yelling at her with a mouth that could swallow an entire family. “IIIII WANNNTTTT YOUUUURRR SOULLLLLL!” Fuck, man. No. And these weird little children that all seem to have distorted takes on Richard D. James’ own face? Nuts. Once that demon starts escaping the TV, I wonder why that old woman lets it shriek in her face, but like me, she can’t look away from such horror. With this song and video, Aphex Twin and director Chris Cunningham packed a decade worth of bad dreams into five minutes. Somewhere, Richard D. James is laughing like a menace. 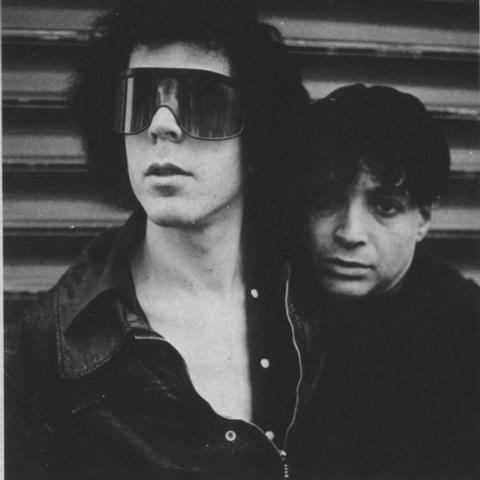 Jeff Terich: My fascination and compulsion toward dark, ominous and eerie music has been ongoing for some time, though I assure you I’m perfectly fine. It’s just that a genuinely creepy musical work that doesn’t go for pure shock tactics — instead using sound itself to craft a harrowing atmosphere all its own — is a rare and impressive thing to find. And as such, I seek it out. But that doesn’t always mean I’m prepared for it. One evening around 2004 or 2005 I was at home alone, writing, listening to a batch of CDs I picked up on a recent trip — including Suicide‘s self-titled debut. Now, Suicide is somewhat eerie all-around, thanks in large part to their minimalist set-up and Alan Vega’s odd vocal tones. But there’s really no touching “Frankie Teardrop” when it comes to pure violent audio horror, and I’ll admit, I was caught off guard. Essentially a 10-minute bad trip about an unemployed factory worker who kills his family and himself, “Frankie Teardrop” moves slowly and without too much in the way of melody. And so it’s easy to get yourself in a trance during the buildup. But when Vega lets out his blood-curdling screams during the first of the murders in the song, I nearly leapt out of my chair, through the window, into my car and drove the fuck into the next county. It’s an experience akin to seeing a masked stranger with a bloody cleaver tapping on your window. Or something along those lines — it’s pretty damn unsettling. I’m wise enough now not to be surprised by it anymore, but that doesn’t mean I’m comfortable lounging alone at night while it’s on. 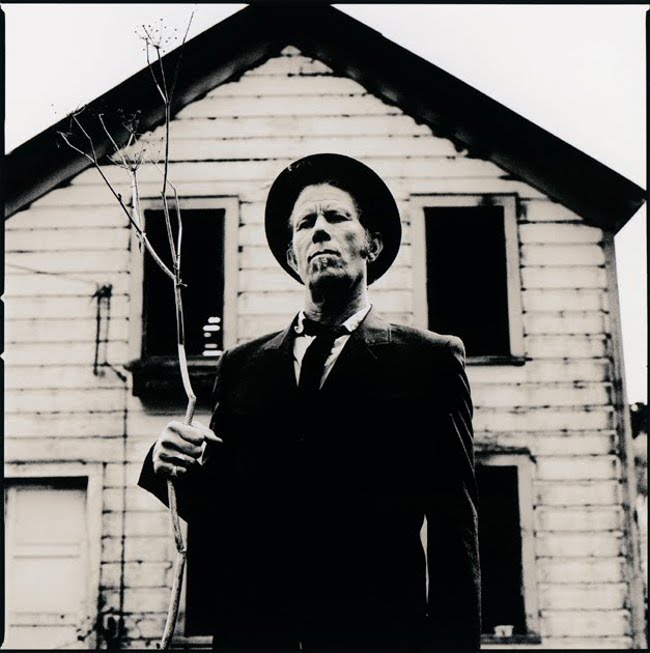 A.T. Bossenger: I’ve been listening to gothic punk and metal for most of my life, and I can’t remember a time when I was sincerely spooked by the whole ‘SATAN’ aspect of your average kvlt act. But I can definitely admit to being legitimately terrified by the creeping interlude “What’s He Building” off of Tom Waits‘ Mule Variations. That album has a chilling enough of a mood as is, but that three minute excerpt – mostly noise, found-sounds and a spoken word narrative by Waits himself, detailing (and hypothesizing upon) the day-to-day spottings of a mysterious hermit – slivers deep into my bones and makes me fear the darker side of humanity. Because, as much as a soundtrack might intensify it, any good horror is built solidly on tales of terror and suspense; the facts and speculative musings that Wait pieces together here are alarming enough to make me dive under the covers in a desperate search for my teddy bear.

Andrea Aliseda: I am not the bravest of souls. I am not a scaredy-cat either, but I am no Fred Jones — Shaggy or Scooby are a little more my speed. Although tales of ghouls and witches might give us a good old-fashioned scare and zombie apocalypses or psychotic slashers have become an industry favorite, a “real-life” story is always particularly horrifying to me. To wit: “Dance with the Devil” by Immortal Technique. I first heard this song at the tender age of 14 in San Antonio, Texas, closely huddled by my gang of skater friends, sharing an earbud as they eagerly awaited my reaction. It opens with a gloomy classical piano loop (sampled from Francis Lai’s “Love Story”) that sets the tone for the eerie, terribly chilling song. Immortal Technique introduces main character William “Billy” Jacobs, and describes his shallow and relentless quest to live out the “Scarface” dream. He drops out of school, sells crack, mugs people, and starts brawls to prove himself. His crew decides to test his commitment to the game by raping a woman. Cue the dramatic violin. Billy’s gang spots the victim, they seize the unsuspecting woman, cover her face with her shirt, and take her to the roof of the building. After breaking her jaw and some ribs, Billy and the gang proceed to rape her violently while she cries softly and bleeds out through her clothes. Once they’ve had enough, one of the gangsters hands Billy a gun to seal the deal. What comes next is so disturbing, I’m doubting why I picked this song to write about in the first place.

A well-timed and melodically sinister Mobb Deep sample that goes, “I’m fallin’ and I can’t turn back” chimes in. The suspense comes to a boiling point just as Billy is feeling strong; he’s finally attaining the respect he yearned for. With a .22 in hand, He begins to unveil the woman he just raped and beat half to death. Ready to kill, he looks fearlessly into his victim’s eyes and stops cold. The woman looking up at him is a familiar face, a face he’s known his whole life. His mother’s tortured eyes pierce his and he drops the gun. The piano goes silent in horror. The percussion beats vehemently, like Billy’s panicked heart. A frantic lunatic, he turns to face the devil on the ledge and follows his mad waltz off the edge of the building — dying soulless in his fiery fall.

The piano hypnotized me and the story mortified me, bringing me to tears. Gone is the initial shock and awe, but the chilling line, “So when the devil wants to dance with you/You better say never/Because a dance with the devil might last you forever,” will forever haunt me. A huge thanks goes to my Texas friends — I’m traumatized for life.

Got your own scary musical experience to share? Leave it in the comments!