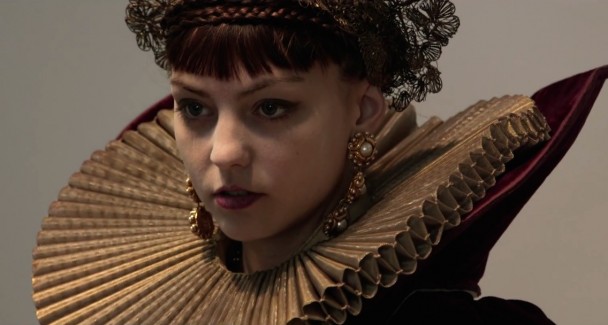 This week, Angel Olsen releases the deluxe edition of her new album Burn Your Fire For No Witness. It was one of our favorite records of the year way back in February — and still is — and now it’s got bonus tracks! But the re-release of the album seems like an opportune time for a new video. “Windows,” the fourth video released from Olsen’s new album, is directed by Rick Alverson, and it’s a slow moving clip with some lightly surreal imagery. Olsen is depicted as standing in a field at first, before entering a house with children running around. Then she has some weird, Vaseline-like goop on her face for some reason. But the best part is at the end, when Olsen becomes an art piece — she’s dressed in Elizabethan garb, with a giant collar, and looks quite majestic. It’s definitely an art-piece kind of video, but whether or not abstract visual pieces are really your thing, it’s worth watching simply because you get to hear such a moving and beautiful song. Watch the Angel Olsen “Windows” video below.