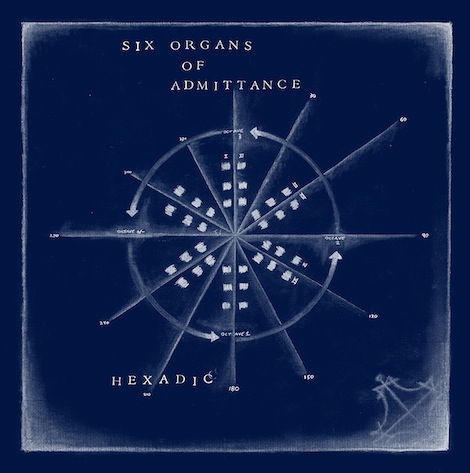 Ben Chasny knows how to freak the geek out. Since the late ’90s, he’s been guiding a unique path toward hypnotic, psychedelic, noise-induced enlightenment via his ongoing vehicle for bad trips and spiritual experiences — Six Organs of Admittance. He’s also collaborated with like-minded American-primitive-influenced guitarist Sir Richard Bishop in Rangda, and lent his fiery guitar work to heavy-psych wizards Comets on Fire on albums like 2004’s Blue Cathedral and 2006’s Avatar. But Chasny also knows how to achieve higher states of consciousness without always resorting to the most cacophonous means possible. Six Organs of Admittance is never tied to just one sound or concept, and on albums like 2006’s The Sun Awakens and 2009’s Luminous Night, Chasny has used the band as an outlet for some of his prettiest, if still cosmic soundscapes to date.

This isn’t entirely the case with Hexadic, which is — depending on how you might choose to catalog Chasny’s releases — the sixteenth Six Organs of Admittance record. There’s little here that shares any of the meditative beauty of Chasny’s mid-’00s, John Fahey inspired output. Nope — here, he plugs in, turns up and lets the feedback fly until it becomes like jagged pieces of shrapnel aimed at the earholes. This is raw, noisy and sometimes just plain messy noise rock. Chasny lays on the fuzz thick, and contorts and wrenches the shape of his riffs until they become instruments of chaos. It’s ferocious, abrasive — even hard to listen to in its most shrill expressions of fucked-up-ness. But that doesn’t mean that Six Organs of Admittance are any less transcendent in their greatest moments.

Hexadic — composed and organized in part by a playing-card-based system devised by Chasny — is a curious collection of sounds to wrap one’s head around. For those more familiar with Chasny’s recordings with Comets on Fire, it may not sound quite so shocking — the shrieks and fuzz of the album have some precedent in that band’s furious psych-rock, just as it does with that band’s influences, like Hawkwind, Amon Düül or Ash Ra Tempel. Yet a lot of the time it feels like a noise-caked exercise in free improvisation. After a booming open chord that sounds like it was plucked from a Sunn O))) record, “Wax Chance” enters a rippling vortex of distorted guitar squalls. There’s a simple, stumbling rhythm underneath the eardrum-piercing guitar freakout, but it’s a tenuous tether to the earth. Chasny is aiming for something higher, noisier, and significantly less structured by any conventional pop framework.

For as much racket as Chasny makes, however, much of Hexadic is actually quite beautiful. His guitar freakouts are thrilling, of course, but the more satisfying moments are the ones in which he tones down the fuzz. “Hesitant Grand Light” is one such highlight, its juxtaposition of electric chords and tremolo-picked acoustic guitar notes approximating Six Organs’ own take on a Morricone spaghetti western soundtrack. And “Future Verbs” is a haunting, almost dark ambient exercise in weirdly spacious staircases of reverb and doom. It’s these contrasts between loud and quiet, light and dark, chaotic and measured that make Hexadic stand out among an already vast catalog of sounds. Yet it’s Chasny’s ability to find more strange, sometimes unsettling avenues to explore that makes such a catalog seem potentially limitless.

White Hills – So You Are… So You’ll Be