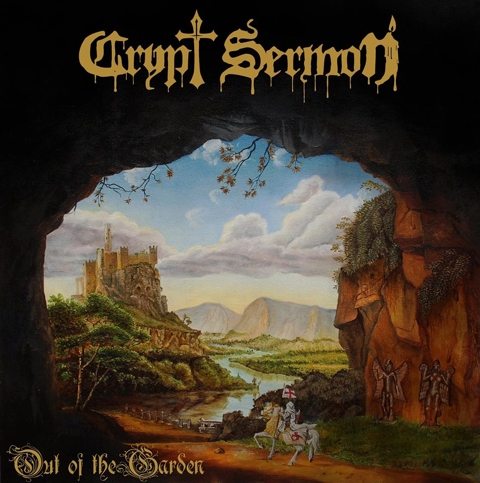 Doom metal isn’t fun — or at least that’s what its evolutionary arc might have you believe. It’s a genre founded on sorrow and despair, gloom and darkness, which lends itself toward a frequently dour listening experience. And since the late ’80s, that’s only grown more profoundly apparent, whether via ethereal, gothic doom like Paradise Lost, or through the ugly, harrowing depths of drone doom like Khanate. Indeed, it can be pretty dark and hopeless the further one crawls into the mausoleum, but that doesn’t mean doom metal can’t be fun. Listen the debut albums by Black Sabbath, Pentagram or Saint Vitus — essential blueprints for the genre as a whole — and it’s hard to come away from the experience without smiling a little.

Listening to Out of the Garden, the debut album by Crypt Sermon, it’s hard not to come away with the idea that the Philadelphia band isn’t entirely sold on the idea of doom metal exclusively being a domain for the bummed. It’s a heavy album, naturally, and one that deals heavily in the common tropes of doom metal — slow tempos, ornate riffs, gothic interludes. And yet, while the band’s intricate arrangements and adherence to a dark aesthetic certainly prove they take doom metal seriously, there’s an energy about Out of the Garden — an old-school kind of heavy metal showmanship — that makes it transcend the dour and dismal.

The descent into Crypt Sermon’s, erm, crypt begins with a synth-driven new age fanfare, like some kind of pipe organ of the damned. But once that first riff crashes through the stained-glass window, the misty graveside scene gives way to a hard-rocking metal waltz. That track, “Temple Doors,” showcases Crypt Sermon’s many strengths all at once, from Steve Jansson and James Lipczynski’s complex and complementary fretwork to Brooks Wilson’s expressive, dramatic vocal style. The band has clearly studied the teachings of Candlemass and Solitude Aeternus well, but add their own touch in sometimes unexpected ways, like the psychedelic vortex at the beginning of “Byzantium,” or the thrash metal chug that erupts two minutes into “The Holiest of Holies.” And when that happens, it’s hard not to get caught up in the rush of it all.

While it’s not quite true that the material on Out of the Garden has the old-school camp value of Scott Reagers’ zombie tales or Bobby Liebling’s cautionary lycanthropy, there’s still a certain hard-rocking classicism about it that makes it more fun than so many doom metal bands ever dare to be. They just happen to do it their own way, via impressively innovative songwriting and a knack for coloring outside the lines at just the right moments. Reveling in darkness never felt like such a good time.