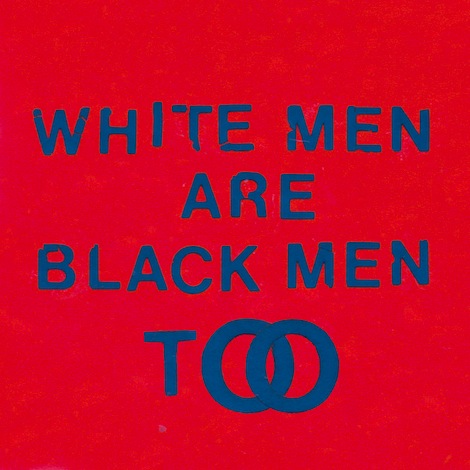 Young Fathers couldn’t have started 2015 off in a better position. Last fall, the Edinburgh trio won the esteemed Barclaycard Mercury Prize for their 2014 album Dead, which showcased the group’s peculiar and innovative combination of genres, sounds and fidelities. Their beat-driven, fuzz-drenched lo-fi pop has few easy parallels, and the sheer novelty of that surely contributed to the decision to name their third album the best UK album of the year against fairly intimidating competitors like FKA Twigs’ LP1. Yet it’s not just the innovative approach; Young Fathers — who were previously affiliated with Bay Area experimental hip-hop label and collective Anticon — back their strange, booming production sound with strong melodies and neatly crafted songs.

The trio’s songwriting talents are more apparent than ever on fourth album White Men Are Black Men Too, which finds them putting further distance between themselves and the “UK hip-hop” tag that’s followed them around since day one. There are hip-hop elements here — just as there are pop, rock and dance elements — but that’s just one aspect of the thing, rather than the entirety of it. In just the first 30 seconds of leadoff track “Still Running,” there’s an avalanche of sounds, from pulsing organ to squealing psych-rock guitar and, oddly, glockenspiel (which doesn’t make its last appearance, either). And in comes the song’s darkly joyful refrain, “Tonight I don’t love God.”

“Still Running” is a fairly representative indication of what you’re getting into with White Men Are Black Men Too. There are heavy doses of distortion, wobbly vinyl samples, melodic singing, rapping and chanting, and few clear divisions between genres or style. And that’s what makes it exciting. Kayus Bankole, Graham Hastings and Alloysious Massaquoi chase one elusive and eclectic pop hook after another, and more often than not they stumble upon something that’s not just interesting, but breathtaking in its execution. The upbeat “Nest” sacrifices none of the weirdness of their production techniques, but its wow-heavy piano loops and children’s choir chorus make an already catchy R&B track downright triumphant. The spooky organ that kicks off “Rain or Shine” leads a path down to a minimal yet powerful psych workout, while “Feasting” erupts into some needling patterns of heavy synth that make a lurching trip-hop into a wonderfully hallucinatory experience.

White Men Are Black Men Too is messy in an utterly thrilling way, its choppy and noisy pop melodies making for a fitting backdrop to the likewise messy terrain of politics and race. There’s the title of the album, for one, which singles out white men and black men in a way of reminding us that race is, in fact, a man-made concept. And the album is punctuated with lines like “I’m tired of playing the good black/ I’m tired of having to hold back,” and “Liberated/ Is that how I feel?” For as many meditations as there are on identity, however, White Men Are Black Men Too is more of a celebration than a demonstration. Unity doesn’t happen overnight, but there are worse ideas than having a summit on the dancefloor.