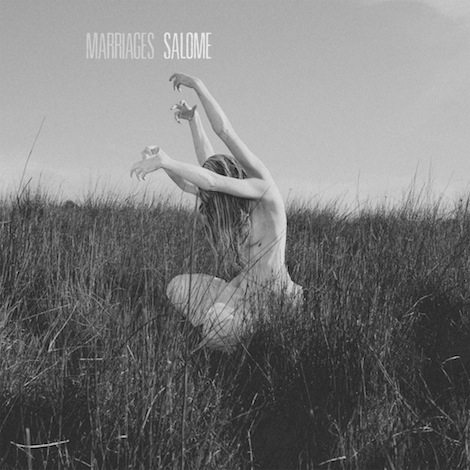 Marriages are a force to be reckoned with. The progression of this group of musicians from post rock/experimental instrumental music to more song-oriented alternative rock has culminated with their first full-length LP, Salome. Named after the woman in the Bible who requested John the Baptist’s head on a platter (and whose wish was later realized), Salome is not conceptual in nature, though it definitely has an overall vibe and atmosphere. It has a brooding, dark energy that permeates throughout each song and manifests in a range of ways, from introspective to seductive to menacing. Salome is simultaneously desolate and beautiful, and is one that must be heard to truly experience (preferably with a good sound system or with headphones).

The biggest shift from their Kitsune EP is the prominence of Emma Ruth Rundle’s voice. While her vocals shine on Kitsune, they play a greater role here. She shows an incredible range and versatility — at times deep and subdued, other times soaring and expressive. The soundscapes and tones that she is able to create with her guitar work are a central part of their sound. Gregory Burns is a solid bass player, and while his bass work is not highlighted in a major way, he contributes considerably to the depth of sound, both with his monstrous bass sound and with the sonic heightening provided by his keyboard work (“Less Than” is a prime example). Andrew Clinco’s drumming has the deft complexity of Tool’s Danny Carey (check his tom pattern during the verse of “Southern Eye”) and the strength of Jimmy Chamberlain. He shows both restraint and strong technical ability as he contributes to the wall of sound.

“Skin” stands out as a catchy, hook-driven song that maintains the atmosphere of the album but does so in a more accessible way. The title track, however, has a chilling vibe, as Rundle shouts in strained desperation. The song is evocatively dark and powerful, and is a unique musical statement that reveals itself with each listen. “Less Than” begins with a trance-like keyboard intro that is later put to rest by a subdued verse, only to be blasted through by a thick, heavy chorus. Next to “Skin,” it’s one of the most representative songs on the album, showing both strength and subtlety, and managing to be highly memorable all the while.

One of the most unique aspects of Marriages’ sound is the atmospheric quality of their production. Marriages have a booming, spacey vibe that defines their sound. As many three-piece bands face the task of filling in sonic gaps, Marriages is able to create a powerful, strong sound with distorted guitar, a thick rhythm section, and strong synths. Their heavier moments are some of my favorite moments on the album — Rundle’s vocals and chunky guitar, along with thick bass and booming drums, bathe you with sound. I would imagine that seeing Marriages live would be a very loud, heavy, consuming experience — one that I would definitely love to have.

Although this powerful, atmospheric sound is captivating and mesmerizing at times, there are other times in which Rundle’s voice is buried in the thick atmosphere — the title track is a perfect example. Her powerful vocal lines are buried in synth waves, airy guitars, and massive bass tones and toms. I even recognize that this is likely a stylistic  production choice, but as her voice is a highlight of the music, there are moments where I wish her voice could be cranked up and could blast through. But it’s just a slight nitpick; Marriages’ first full-length album is an impressively potent statement.

Red Sparowes – The Fear is Excruciating but Therein Lies the Answer