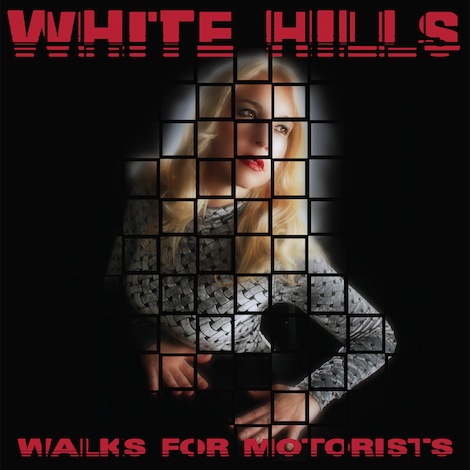 Every few years or so, indie rock seems to flirt with psychedelia in a way that’s often exciting, but ultimately noncommittal. Whether it’s in the shape-shifting jams of Animal Collective, the Gameboy acid of Dan Deacon, the peyote slowcore of Brightblack Morning Light or the continent-hopping theatrics of Goat, the psychedelic fringes of indie rock will inevitably come roaring back in one way or another. And yet Brooklyn-based White Hills, whose sound is rooted in the heavy-psych thunder of Hawkwind and Amon Düül, has kept their course straight and steady over the past decade — expanding, contracting, and redirecting in one way or another, building a legacy that’s as consistent as it is heavy and disorienting.

Walks For Motorists, which follows 2013’s So You Are… So You’ll Be…, is neither as spacious and freewheeling as some of the band’s earlier records, nor their most straightforward. What distinguishes it among a discography marked for its volume and mind-fuckery is just how heavy it is. For a band that’s already pretty damn noisy, White Hills crank it up even more this time around, letting the fuzz and the feedback converge in an orgy of direct-hit dissonance. Where on an album like their 2010 self-titled release, songs would push and pull between quiet and loud, over expanded, 10-plus minute dirges, everything hits you at once here. The fuzz that comes booming out of “We Are What You Are” is thick and noxious, and it gets all up in your shit without hesitation. There’s a sexy swagger to “Wanderlust,” but it’s a sinister swagger that White Hills are engaging in, with Ego Sensation’s bass slithering with menace. And “No Will,” one of the catchiest tracks of the bunch, arrives almost like Hawkwind covering Bauhaus’ “Dark Entries.”

In fact, there’s a pretty heavy post-punk undercurrent to a lot of Walks for Motorists, which is a fun new diversion for the band, but the songs that stand out most are those that ease off the distortion. “LSD or USB” is hissing and steaming machine-kraut that walks a line between icy and beautiful. And the synth-driven kosmiche excursion “I, Nomad” is the most stunning piece on the entire record, navigating a pathway between minimalism and early New Order singles. An album that’s simultaneously so heavy in its psychedelia and yet so prone to exit the galaxy on a whim is entirely in character for White Hills, but it’s worked before, and it mostly works here. And yet I can’t help but think that, as fun as their noisy stoner-rock numbers are, it might be in the prettier, textured pieces that White Hills’ real masterpiece might eventually lie.

Black Mountain – In the Future