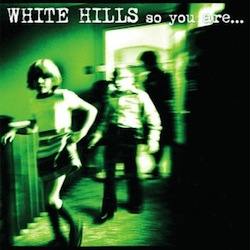 Earlier this spring, White Hills spent several weeks on the road touring in support of Savannah psychedelic metal band Kylesa, an act that, aesthetically, shares a lot in common with the New York space rockers. Just a few months later, White Hills took the opening spot on tour with hard rock legends The Cult — again, a logical match if not an obvious one, their power and volume making for a complementary pairing, though certainly not an identical one. It’s likely that crossover between crowds was minimal. And generally, hard rock audiences and metal audiences aren’t looking for the same experience, though that’s sometimes the case. Yet White Hills occupy that curious space between these two technically similar and aesthetically different sounds, while pushing off into a realm nowhere near either.

Maybe that doesn’t make a lot of sense, but as space rock is concerned, these kinds of contradictions are what the genre is founded upon. White Hills, who stem from the tradition of bands like Hawkwind, Spacemen 3 and Gong, at once seem crushingly heavy, their feet firmly planted on the ground and low rumble of Orange amplifier fuzz sending out tremors through terra firma. Yet the swirl of effects and dense ambience they create can feel weightless and otherworldly, as if one were to become adrift in the cosmos. Yet just to add one extra element to this push and pull, there are hooks lurking deep within the band’s thick, fuzzed-out soup, and ones not too difficult to find, either. Maybe it’s a stretch to call White Hills catchy, but they’re certainly accessible on a visceral level.

So You Are… So You’ll Be…, White Hills’ 12th album by Wikipedia’s count anyway, puts a pretty heavy emphasis on the louder, riff-driven aspect of their sound. From the beginning, White Hills has been a band that emphasized guitars above all, and guitars are front and center here, blowing out speakers with ungodly amounts of distortion and effects, flying into wah-wah laden solos and generally just rocking out with the volume knob cranked until it breaks off. “Forever In Space (Enlightened)” rides a simple but consistent groove merely for the sake of providing a canvas for Dave W.’s freewheeling fretwork. And “In Your Room” has one of the most primally satisfying power-chord riffs on the whole thing, stomping and roaring with a brutal simplicity.

It’s interesting, then, that a fair portion of the album is allocated for dense, ambient kosmische drone-outs. It’s difficult to imagine the band breaking out the Tangerine Dream-like “The Internal Monologue” at a Cult show, for instance, but it’s these dreamier moments are some of the record’s most stunning, the noise drifting away for the sake of a heady, mesmerizing experience. A band that makes as much noise as White Hills does sometimes needs that extra buffer of weightlessness to lend their noisier tracks more potency, rather than dilute them. Once you’ve ascended through the atmosphere at 17,000 miles per hour, it’s best to merely let oneself drift.