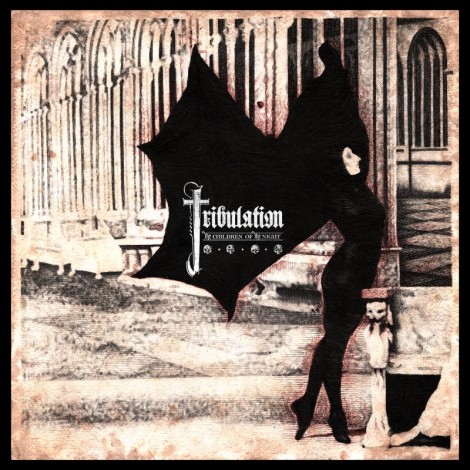 Don’t call Tribulation a death metal band. The Swedish band ostensibly began their career as one, way back in 2004, but it wasn’t long before they began to break those narrow boundaries down, incorporating both elements of thrash metal and more atmospheric touches on their strong 2009 debut The Horror. By 2013’s The Formulas of Death, however, any semblance of traditionalism went right out Nosferatu’s castle window. In its place was a sprawling, towering piece of progressive metal that, contrary to its name, was anything but formulaic. With heavy doses of psychedelia and a pair of tracks that pushed well past 10 minutes apiece (one of them not-too-subtly named “Suspiria”), the 73-minute epic proved Tribulation to be not just a band bold enough to challenge convention, but one that arguably didn’t even bother to acknowledge such boundaries.

The Formulas of Death was a fantastic album, but The Children of the Night is Tribulation’s masterpiece. Even less tied to the tropes of death metal than its predecessor, the band’s third album and first for Century Media holds the curious (albeit highly impressive) distinction of being both their most experimental and their most accessible. Doing one or the other is hard enough, but to craft a work this ambitious and monumental that just happens to have the best and most immediate melodies of your career is something that even the greatest artists can struggle with. And yet Tribulation not only pulls off such a daunting task, they do it with the kind of flair and attention to detail that makes The Children of the Night not just a fascinating work to behold, but an utter joy to listen to.

In all fairness to Tribulation, they were already well on their way. The Formulas of Death contained at least trace elements of all the diverse yet complementary elements that the band has on full display here: the theatrical occult heavy metal of Mercyful Fate, the melodic death metal of At the Gates, the space prog of Pink Floyd and the giallo-flick art rock of Goblin. The Children of the Night finds Tribulation tinkering with the percentages while splashing in even more ingredients to their bubbling cauldron of dark metal, most notably post-punk and gothic rock on tracks like “The Motherhood of God.” You can almost imagine some of these songs seamlessly fading in after spins of Sisters of Mercy singles, and just to put greater emphasis on Tribulation’s goth-rock cred, some deluxe editions of the album feature a bonus track worth seeking out: A cover of The Cure’s Pornography opener, “One Hundred Years.”

What really sets The Children of the Night apart from the band’s previous two albums, in addition to how much it marks a full commitment to a style more rooted in classic heavy metal, goth and ’70s prog, is just how heavily it’s made up of powerful standalone songs. It’s a powerful statement as a whole, but broken apart into pieces, there are greater wonders to discover. And it all happens pretty fast — the eerie classic-horror organ of “Strange Gateways Beckon” give way to a surge of heavy metal power, majestic melody, and a richly detailed arrangement that prominently features some gorgeous touches of piano. “Melancholia” is more straightforward in its chug of power chords and psychedelic riffs, but that too is merely an introduction to a velvet-lined spiral staircase into a truly stylish crypt. Yet the greatest string of songs happens in the album’s second half, beginning with the post-punk leaning “The Motherhood of God,” segueing into the gorgeously eerie “Strains of Horror” (with the best solo on the entire album), and on into the triumphant hooks of “Holy Libations.” I haven’t heard a better sequence of metal songs as breathtaking as this trio so far this year, and I’m not sure I will.

If there’s one element of Tribulation’s sound that’s still connected to death metal, it’s Johannes Andersson’s vocals. He has a throaty growl, which can sometimes feel a bit abrasive against the elegant arrangements on the album, much in the way that Deafheaven’s George Clarke sometimes clashes against that band’s beautiful, shoegazing bursts. But it’s not at all a problem; Tribulation began life as a more straightforward metal band, and though they’ve catalyzed the abrasion and harshness into something more ambitious and, at times, quite beautiful, there’s something refreshing about having that reminder of their roots, as well as seeing how far they’ve come since 2005’s The Ascending Dead EP. The Children of a Night is both a reward at the close of a decade-long journey, and an exciting look ahead at brilliantly dark visions to come.