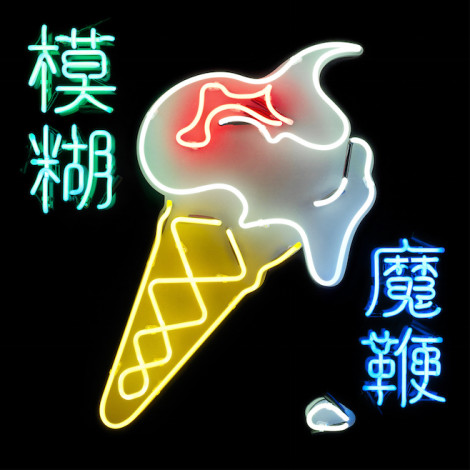 Blur began recording their eighth album — and their first in 12 years — in Hong Kong, after they found themselves with some unexpected time to kill. Hong Kong is kind of a weird place. It’s overseen by the Republic of China, but capitalism is its lifeblood. It’s densely populated and space is a premium. Hong Kong caters to its expatriates with a huge selection of global cuisine, but many expats don’t stay for a very long time because their business moves them around. English is one of Hong Kong’s official languages, but if it’s the only tongue you know, you might have a hard time. It might not have Tokyo’s sensory overload, but it’s close, and as befits the 21st century, Hong Kong is expanding vertically.

The Magic Whip isn’t strictly about Hong Kong, but the city is leader Damon Albarn’s conduit to address the ironic twin children of technology: Expansion and isolation. This is not a new theme, even for pop music. But Albarn’s in an intriguing position. After making what’s arguably Britpop’s most archetypical album, Parklife, Blur went through a series of hard left turns that completed with their last album Think Tank, a visionary work soaked in the stimuli of North African, hip hop and electronic music. And then there’s Gorillaz. Albarn and Jamie Hewlett created a virtual band (the most successful virtual band ever, according to Guinness!) whose playbook required a heavy component of emerging internet technologies, and a rotating roster of guest artists and collaborators who flew in for the night. Talk about “ephemeral style.”

So, in a way, The Magic Whip comments on a simulated environment that Albarn, as much as any other pop musician, helped create. But it’s not pharisaical or two-faced. As digitally informed as Gorillaz is, melancholy and ennui were prime components of its strategy, and Blur had broached that downward emotional plane with “Tender” from 13. With Blur a full-blown entity again, and with original guitarist Graham Coxon returning to make invaluable contributions, The Magic Whip is a constrained near-eulogy that ekes out romance and languor through the busy prism of the switched-on East.

“This is the place to come to… or, well, it was,” Albarn sings in the opening “Lonesome Street,” a hobbling mix of Ziggy Stardust guitars, lean keyboard arpeggios and broken grooves. It’s a Blur song with skin grafts. Albarn might be back on the streets of Parklife where, as complicated as the scene might have been, once was home. But it’s different now, and in no time Albarn floats off into other places where artifice may have become the confusing new ideal. “New World Towers” is a halting piano ballad where neon signifies convenience, and gleaming architecture disguises an old, fractured foundation. (It’s tempting to think it’s about New York’s new Freedom Towers, but it’s somewhere else as well.) “Log in and pray 24 hours,” Albarn sings, and it’s not entirely a dismissive taunt. It’s the way things are done now.

The ways of old don’t deliver the same way they used to, but instead of wallowing in their failures Albarn’s trying to figure out where they belong now. The thrilling “Go Out” starts with a big beat and electric squall – just the way it felt in the ‘80s and ‘90s – but it takes no time to start counting the cost. Venturing out into the wild suddenly becomes a testament to “the luxury of stealth,” as Coxon’s menacing guitar pushes Albarn through “greedy go-getter(s) in the skybox.” It’s a slightly better scene in “I Broadcast,” where Albarn embraces “aspects of another city.” Still, the thrill of discovery is intruded upon, perhaps by society’s collective, reactive need to thrust the whole thing on Instagram, or turn it into a gaming event (“all for a high score”).

What I’m betting will be the most overlooked aspect of The Magic Whip is Albarn’s steadfast empathy, glimpsed last year in his exceptional solo debut Everyday Robots. “Thought I Was a Spaceman” starts in a tentative mainframe of electro handclaps, echoed fingerboard scrapes and Spanish guitar. “I thought I was a spaceman digging out my heart,” Albarn sings, “In some distant sadness, in a cover.” But the song’s not over when he acknowledges “we failed”: The beat picks up, there’s an orchestral swell, and until the song ends in a gust of NASA radio feedback Albarn manages to create some awe that the journey just took place. “There Are Too Many Of Us” starts with, of all things, a martial pulse of strings reminiscent of INXS’s “Never Tear Us Apart.” Albarn’s lament for increasing populations forced into smaller and smaller spaces strikes hardest when he says “We all believe in praying for our immortality.” The more people that exist, the more people there are to hurt. The temporarily pleasing pop of “Ghost Ship” and “Ong Ong,” two songs where Albarn gets outside of himself, are the surest moments of hope on the album, but that hope’s borne through reflection (“I had to get away for a little while but then I came back much harder”) and reaching out (“I wanna be with you”).

“Pyongyang” is a marvel, maybe one of the most significant achievements Albarn’s come up with, even more miraculous since it’s hard to get a handle on it. Opening with the tolling of a ship bell, Albarn stares down on the capital of North Korea, compounded by images of death and extinction. “Tomorrow I am disappearing” – leaving? Executed? “And the pink light that bathed the great leaders is fading” – Roses? Spotlights? Watered-down blood? The piece ends with mentions of “silver rockets coming,” but it’s interesting that Albarn doesn’t mention which direction they’re headed. Whatever the case, the cold grandeur of Pyongyang is, again, not so much an external symbol of North Korea’s detachment and bland nationalism as it is of sadness, in mechanized splendor. It’s a universal vision.

At times The Magic Whip is a little more interesting to think about than to listen to. Albarn and Coxon use their tools so subtly and carefully in spots that it very occasionally tends more towards appreciation than engagement. But in context of the Blur arc and Gorillaz’s deceptive artfulness, it’s clearly and powerfully executed as a statement. Blur’s trek from the commercialized puberty and dowdy mannerisms of southern England to the saddened wonder of the East, just on scale alone, is impressive in its reach whether it took seven years or 27. The range of emotions on The Magic Whip – running under the sad façade of convenience, instant publishing and download speed – cements Damon Albarn’s status as an unlikely, probably reluctant, but very credible visionary.