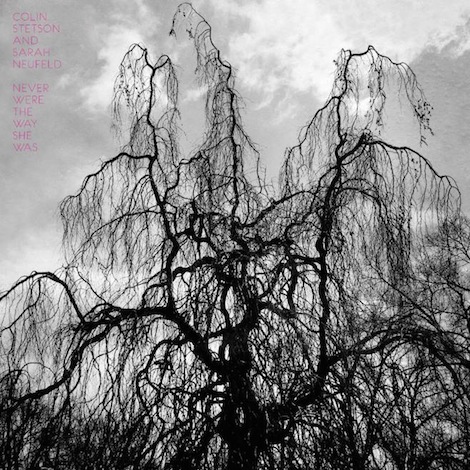 Saxophone player Colin Stetson has never been anything less than an innovator. In addition to his already stunning solo material, Stetson has worked with Arcade Fire, Tom Waits, Feist, TV on the Radio, and Bon Iver. The Arcade Fire mention is important here because that’s how Stetson crossed paths with violinist Sarah Neufeld. And after some years of collaboration between the two Constellation-affiliated musicians, we arrive at Never Were the Way She Was. The album sounds like something that was destined to happen as Stetson’s sax and Neufeld’s violin conform into one sprawling piece. Stetson already has enough sauce as a solo artist; Neufeld merely adds another layer. Never Were the Way She Was is greater than saxophone and violin—it’s an instrumental force that hit the chest cavity.

If Never Were the Way She Was wasn’t already incredible enough, the fact that no overdubbing, looping, sampling, cutting, or pasting was used during the recording process in a rural Vermont farmhouse can make us respect Stetson and Neufeld even more. We can hear and feel the moments when Stetson gasps for breath. His breathing noises could have easily been edited out, but it gives the record added realness. Stetson is working hard, and he makes me realize the importance of inhaling and exhaling air. He plays both bass and tenor saxophones, and “The Rest of Us” seems to feature both; during its buzzing, squealing whimsy of “The Rest of Us,” Stetson wields his bass sax to the point of sounding like harsh bass guitar strings. Stetson and Neufeld are battling, racing one another on the album. They build up to frenzy, then come to a calm. The album teeters between elegance and heft. A pretty song like “In the Vespers” would be a good soundtrack for a time-lapse video of beautiful flowers blooming, opening wide. But the song picks up speed, getting skronky and scribbly until Stetson and Neufeld put on the brakes. Then, the song gets a little bleak. “With the Dark Hug of Time” could rival the darkness of black metal, saxophone feedback slicing in and out. Stetson has the force of a fire-breathing dragon. There’s a foot stomping on the wood, and then a break—we hear Stetson sniffling, maybe emptying his reed. Then, his sax bellows a long, mournful bellow as Neufeld’s strings sing underneath.

Never Were the Way She Was might be the realest album released this year. It’s full of life, yet features no editing tricks. The album’s title comes from a metaphorical tale of the life of a girl who ages as slow as mountains. But glacial beauty and themes aside, it might not take long for the oscillating tones of saxophone and violin to grow on the listener. Compelling instrumentals like these leave plenty of room for imagination.