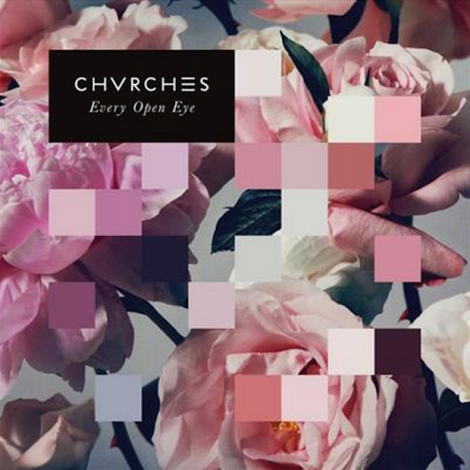 Incredible but true: Chvrches started out as a side project. What began as Iain Cook (ex-Aereogramme/The Unwinding Hours) and Martin Doherty (previously part of The Twilight Sad’s live band) inviting Lauren Mayberry to sing on some recordings they’d made together—all arising out of Cook producing an EP for Mayberry’s old band, Blue Sky Archives—has turned into a synth-pop force of nature that sold half a million copies of their debut album, 2013’s The Bones of What You Believe. That level of success seemed to have come out of left field, and Chvrches themselves didn’t see it coming, either.

What their debut lacked in thematic unity and consistency, it’s made up for on sophomore album Every Open Eye with the sort of songcraft that belied the fact that they had all come from vastly different musical backgrounds. Every Open Eye takes the best parts of its predecessor and improves on them in every conceivable way. Two years spent touring has gone a long way towards helping them find themselves and put to rest the hesitancy that bogged down parts of their debut. Its sound is no great leap from what came before, but then, it didn’t need to be—Chvrches are just writing smarter, thinking bigger, being bolder, exuding the sort of confidence displayed by Mayberry when she takes down online misogynists, as she’s needed to do numerous times, most recently in the wake of the “Leave A Trace” video release.

Chvrches have gotten to where they are on their own terms, and if you haven’t yet been convinced that they take no shit, you can certainly hear it in their music. The aforementioned “Leave A Trace” introduces one of the record’s main themes: getting over past disappointments and failures and becoming stronger in the process. Sure, its lyrics lay bare romantic misadventures (“You talk far too much for someone so unkind / I will wipe the salt off of my skin, and I’ll admit that I got it wrong / And there is grey between the lines”), but it’s a break-up song on what is categorically not a break-up album. Mayberry & Co. are keen to move on from what’s come before, and the topics of growth and change are often referenced. They draw the line under past efforts both figuratively and literally, with a smirking callback to their debut on “Never Ending Circles” before even 30 seconds have elapsed (“Throw me no bones and I will tell you no lies”). With that done, it’s onward and upward to better things, and moments of euphoria that eclipse any previous work. The racing “Make Them Gold” is a hymn to self-acceptance, tying into the album’s narrative with the sort of genuine positivity that’s refreshing to hear, as well as a (sorry) solid-gold chorus: “We are made of all our mistakes / We are falling but not alone / We will take the best parts of ourselves and make them gold.”

That’s exactly what Chvrches have done on Every Open Eye. There are no jarring tonal shifts like there were at key points on the debut, and while Iain Cook’s vocal presence remains slightly underused (he takes lead on just one track, let loose on the soulful “High Enough To Carry You Over”), Mayberry is in fine vocal form; she sounds more self-assured than before, reaching for the rafters on the comparatively somber “Afterglow,” backed by a wall of synths that threaten to erupt, but are instead subdued for a hushed coda, Mayberry repeating “I’ve given up all I can” to bring the record to a stately close. It may not be the valedictory finish an album as colossal-sounding as this could benefit from, but it works wonderfully as an epilogue and is one of the most beautiful songs in their catalog to date. They started from a chance meeting, but on their second album, Chvrches prove that they’re more than just a side-project—they mean business.