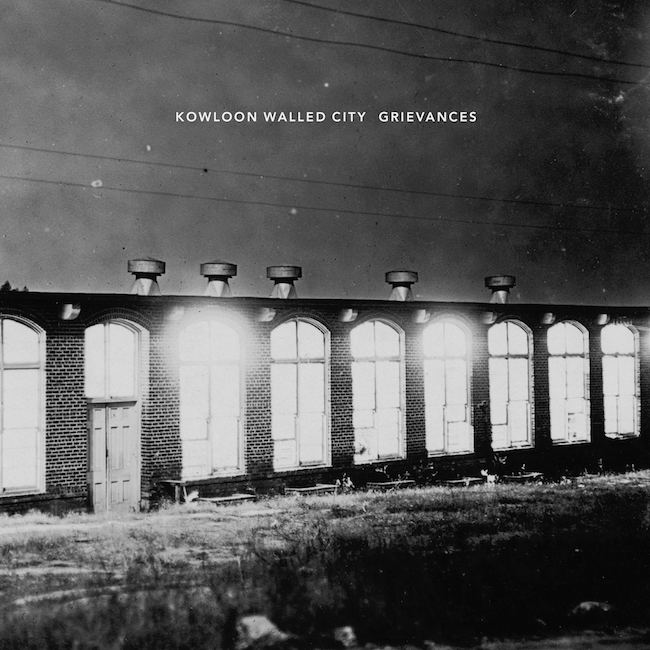 Kowloon Walled City‘s “Your Best Years” moves a lot like a doom metal song. It’s slow and mournful, overflowing with anguish that trickles like molasses from the San Francisco band’s amplifiers. In any other context, it would be appropriately accompanied by black magick robes and bong smoke, its ominous tone creeping like an inevitable visit from the Grim dude himself. But “Your Best Years” doesn’t really sound like a doom metal song. Scott Evans and Jon Howell’s guitars ring with a trebly sharpness, their metallic jangle a weapon of precision more than an instrument of blunt wallop. This isn’t doom so much as it’s a slow-moving depiction of impending calamity, rendered with an almost beautiful kind of clarity.

Grievances, the album that “Your Best Years” opens, is aesthetically akin to its predecessor, Container Ships. It should be; it was recorded in the same studio (Oakland’s Sharkbite Studios) by the same people, under similar circumstances. You could probably even take those seven songs, shuffle them with these seven songs, and it might be difficult to tell, without any prior knowledge, where one album ends and another begins. Here, however, the tracks seem to creep with more patience, each chord ringing into the void, and each power chord chug seemingly hitting that much harder against the silence. Container Ships was dark, but Grievances is utterly chilling.

Part of the feeling of cold and bleakness on Grievances comes from the very sonic details that would make them stand out against other doom metal bands. The crack of Albini-esque snare against the surgical-tool iciness of the guitars lends these seven songs a sense of unease that a towering wall of fuzz simply can’t. It’s a cold and desolate sound, broken up only occasionally by the visceral explosion of a track such as “Daughters and Sons,” or the pounding “The Grift.” Grievances isn’t about pummeling, however. It’s about an intimidating, majestic beauty. Kowloon Walled City just happen to come upon that kind of awe-inspiring sound through sharp edges and efficient movements. Theirs is a devastating elegance.