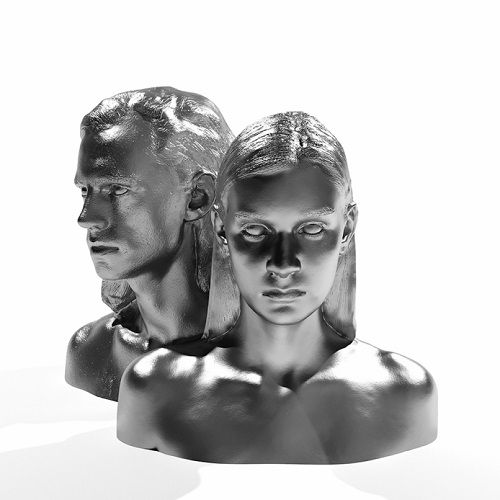 Gems‘ first EP, Medusa, was about as perfectly formed as debuts get. Its four songs nimbly bridged the divide between the synth-heavy dream-pop boom of Purity Ring with the ethereal lullabies of Beach House, and with hooks strong enough to be competitive with either. The Washington, D.C. duo of Lindsay Pitts and Clifford John Usher had a similarly fluid dynamic as those two bands, Pitts providing a breathy and melancholy vocal presence against Usher’s effects-treated, surf-inspired guitar licks and a backing of sparse-yet-impactful synths. Their only problem, really, was timing. Tucked away in November of 2013, the EP arrived as much of the music press was already calling it a day on 2013 (and just a few weeks before Beyoncé proved it still wasn’t quite over). Medusa also showed up in an already saturated market of dreamy synth-laden pop in which the aforementioned Beach House and Purity Ring, in addition to Grimes, M83, Chromatics and Chvrches, had already sucked up most of the air in the room.

Pitts and Usher have been fairly quiet since then, releasing only one single, “Scars,” in 2014, and that song shows up on their proper debut, Kill the One You Love. The album, which comes almost exactly two years after their first EP, felt like a long time in the making, though it’s aesthetically in the same neighborhood as the short-player that preceded it. The duo still explores the nuances of synths vs. post-punk guitars, and still feels thoroughly modern despite displaying the optimal aesthetic to soundtrack a John Hughes film. Late arrival or not, everything here sounds as sensual and gorgeous as you’d expect, though it marks a significant if subtle shift away from the band’s graceful, ethereal pop agenda.

Kill the One You Love is a little bit noisier than Pitts and Usher previously let on. For a duo that had previously been at their best when sticking to sleek, glistening and sexy, good things happen when they adopt a dirtier, less overtly glamorous aesthetic. “Living as a Ghost,” the first single from the album, is steeped in shoegaze fuzz and whoosh. It doesn’t serve to diminish the ethereality or grace of the track, but there’s something strangely satisfying about hearing this stark pop song become interrupted by a monstrous crunch. Similarly, “w/o u” exudes the sensuous feel of Chris Isaak’s “Wicked Game,” albeit with seaside Lynchian noir juxtaposed against some grungy chords, chopped up Dilla style. It’s the kind of trick that could turn a late-nite lullaby into a festival banger without much adjustment.

Buzzing and booming sounds aren’t the whole of Kill the One You Love, and Gems are wise not to lean too heavy on those effects pedals and EQ dials. But with a limited starting palette, they’ve found some fairly easy ways to expand on that, namely to play louder. “Heartbreaker” probably would have been a fine song without the thunderous chorus, but it’s all the more memorable when Usher lets the power chords fly. That’s one of the few exceptions where Usher’s noisy guitars actually sound like guitars, their presence most often blending in with the other effects, however steeped in distortion. Gems’ lines—between genres and instruments alike—have never been so blurry. It’s a fascinating and ultimately impressive turn of events for a band who before stuck to clean lines and gently sparse sounds. And yet, while on paper it’s a formula that’s been revisited time and again, in their hands it ends up sounding surprisingly fresh. Gems’ debut EP gave just a brief look into the band’s identity, but Kill the One You Love is a reminder that 17 minutes sometimes isn’t enough time to truly get to know a band.