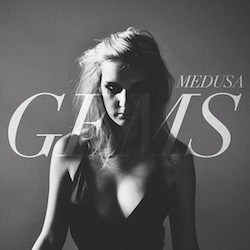 A number of excellent electronic pop groups in the last few years have locked into a fairly predictable, yet nonetheless effective pattern of dropping a string of dynamite singles, only to arrive — fully formed — with a full-length album to put those singles into an even more impressive context. Both Charli XCX and Chvrches delivered on the promise of their early tracks with the release of this year’s True Romance and The Bones of What You Believe, respectively. And last year, Purity Ring pulled a similar trick with their cough-syrup-drunk pop set Shrines. Yet just as these artists have graduated to a larger stage, in sweeps another set of young bands eager to dazzle with a hypnotic mixture of electronic and dream-pop sounds, most notably Sweden’s Kate Boy and Washington, D.C.’s Gems, whose heady, gorgeous approach on new EP Medusa positions them as one of the brightest hopes for 2014.

Comprising Clifford John Usher and Lindsay Pitts, Gems aren’t a synth-pop band in the strictest sense, though synthesizers and programmed beats do play a prominent role in the music they make. Rather, it’s a lush and beautiful hybrid they cultivate, characterized as much by Usher’s shimmering, dream-pop guitars as it is by their ethereal keyboard melodies. One description that’s been making the rounds is that Gems find the sweet spot between Beach House and Chvrches, and that’s not wrong. But there’s so much more happening in their glorious melodies that it really only covers a fragment of what they deliver.

“Ephemera,” Medusa’s opening track, shows off the band’s 4AD influence in a big way, with a delicate swirl of sound that can be likened to Lush or Cocteau Twins, fed through a modern American indie rock filter. And most of the EP is cut from a similar cloth, with slight but important variations. The title track opts for a booming, anthemic chorus, whereas “Sinking Stone” retreats into effects-laden bliss. But each song stands tall on its own, driven by a particularly strong knack for crafting hooks and riffs into satisfying resolutions, and a general sense of atmosphere that I essentially never want to leave. Seventeen minutes of this is adequately nourishing, but a sound this good warrants a feast.