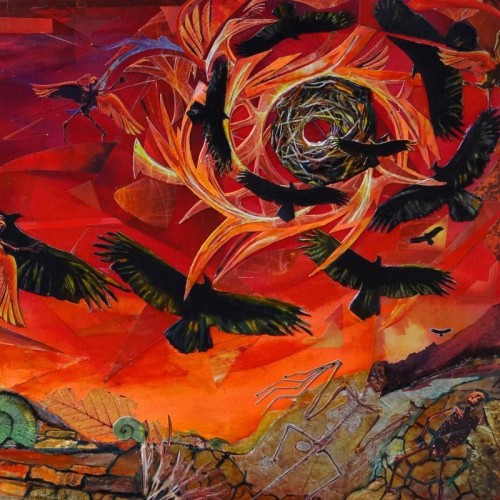 Intronaut has, over their career, divided their fans considerably by their evolution from aggressive, brutal metal with mostly screams and growls, to progressive, jazz-fusion-influenced metal with diverse influences (best exemplified in their previous album, Habitual Levitations: Instilling Words with Tones). With their latest effort, The Direction of Last Things, Intronaut brings back some of their heavier elements and combines them with their prog tendencies. The result is a thrilling, unique and even disorienting album, showcasing a band that deftly jumps from sludge metal to mathcore to jazz fusion, all within a few bars. Despite the diversity and range, Intronaut somehow meld their styles and influences together in a way that doesn’t undermine the songs or feel like a novelty act.

Opener “Fast Worms” begins with a sludgy riff that segues into a fast, heavy verse with brutal screams, altogether reminiscent of The Dillinger Escape Plan. After a harmony-laden chorus, the song switches into a polyrhythmic trade off between guitar, bass, and drums that is later layered with jazz chords and arpeggios, heralding to Construktion-era King Crimson. The song is a representative blend that demonstrates that the solid harmonies and instrumental exploration from Habitual Levitations, and the aggression of previous releases can work together pretty well.

“Digital Gerrymandering” starts with blistering dissonance and deep, low tuned riffage. The octaves and fifths present in the vocals herald to Alice in Chains, and the chunky guitars almost make you forget that the verse is in odd meter. Sinister, hypnotic guitars lead into a booming pre-chorus with apocalyptic harmonies and a stilted offbeat, that then transitions into a pop-metal chorus and a fusion-inspired breakdown. “Digital Gerrymandering” is one of the highlights of the album, and despite the fact that it clocks in at eight minutes, it’s compelling enough to leave you wanting more.

The Direction of Last Things is full of impressive musical passages and unrelenting intensity. The band stated that they went all out on this album, and it’s evident in every track. Dave Timnick and Sacha Dunable’s guitar work is intelligent, stimulating and harmonic, and their vocals and harmonies are the best they’ve ever been. Joe Lester’s clever and versatile bass work is brilliant, as he switches adeptly from clever jazz lines to thundering musical assaults. Danny Walker’s brilliantly aggressive drumming is a highlight, especially on the title track. His beats on this song combine the technical intensity of Mastodon’s Brann Dailor and the frighteningly quick and technical drumming of Virgil Donati. Quick 16th notes are accented by cleverly syncopated hi-hat hits, only to be later trampled by lightning-fast tom work.

Another highlight of this album is the production. Devin Townsend’s trademark stamp is evident throughout this album, as his atmospheric, wall of sound approach makes powerful moments even more potent. Townsend’s abilities as producer are not to be ignored, and he always manages to add a huge, epic quality to any piece of music he works on. The pre-chorus of “Digital Gerrymandering” is an example of this. The explosive, open sound of downtuned guitars and vocals in the pre-chorus still gives me goosebumps every time I hear it.

Intronaut’s newest album will no doubt appeal to metal fans, and there is enough balance between brutality and melody that listeners will not be longing for one or the other. The album, as a whole, is highly complex and challenging, and doesn’t allow too many moments to breathe, except for a few ambient intros and outros to various songs. The density doesn’t hurt the listenability of the album, as the quality of the musicianship and songwriting are consistently top-notch. With The Direction of Last Things, Intronaut are positioning themselves as a versatile and powerful match to contemporaries such as Mastodon and Baroness.

The Dillinger Escape Plan – One of Us is the Killer