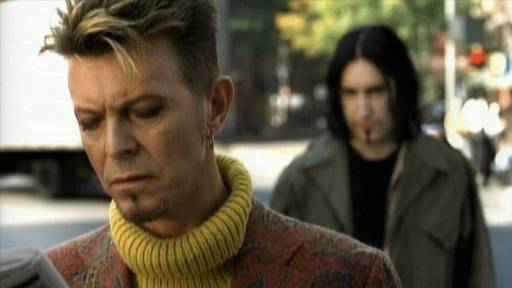 Nine Inch Nails‘ Trent Reznor has written a long remembrance of David Bowie for Rolling Stone. Reznor previously collaborated with Bowie on the 1997 track “I’m Afraid of Americans,” and they toured together during the Outside and Earthling eras of the mid-1990s.

“It’s hard to express how validating and surreal the whole experience of the Outside tour was — to actually meet this man in the flesh and find out, to my delight, that he passed any expectation I had,” Reznor says in the article. “The fact that he was this graceful, charming, happy, fearless character became a new point of inspiration for me.”

Reznor also discusses how Bowie helped him to get sober:

When I met David, he had been through that. And he was content. He was at peace with himself, with an incredible wife, clearly in love. There were a number of times where the two of us were alone, and he said some things that weren’t scolding, but pieces of wisdom that stuck with me: “You know, there is a better way here, and it doesn’t have to end in despair or in death, in the bottom.”

The whole thing is well worth the read; check out the full Trent Reznor David Bowie tribute over at Rolling Stone.

Read our own feature, Starman: Remembering David Bowie, as well as our roundtable on personal Bowie memories.