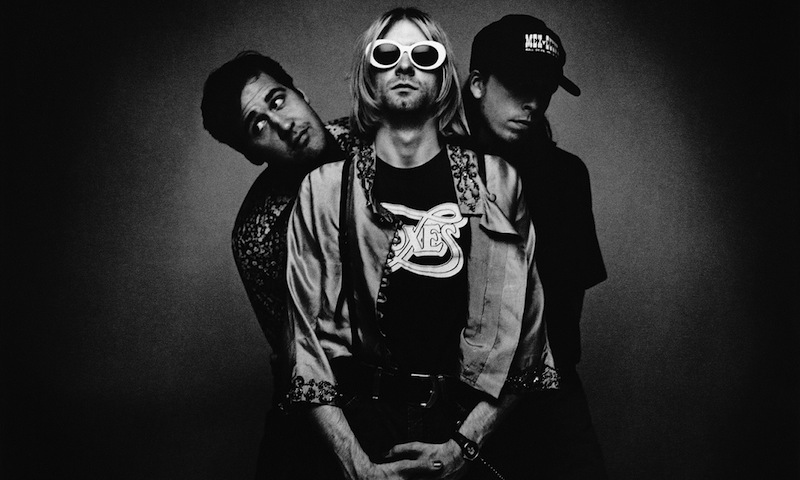 Left of the Dial, Top of the Charts is a new column that will explore the history of alternative rock radio hits as measured by the Billboard alternative chart, starting in November 1991, when “Smells Like Teen Spirit” hit number one. Every other week will take a snapshot of the chart of one week in a particular year, to measure how we got from 10,000 Maniacs to Twentyonepilots in 25 years.

I don’t remember where I was when I first heard “Smells Like Teen Spirit.” My best guess is it was probably in the home I grew up in, in the north San Diego county suburb of Fallbrook, most likely on a weekday afternoon on MTV. I remember seeing Kurt Cobain’s green-striped shirt, and I remember the punk rock cheerleaders in the video. But I couldn’t tell you if I saw the video first or heard the song on the radio—I have a lot of memories about hearing something for the first time and being introduced to something pretty life changing, and this isn’t one of them.

That doesn’t mean it wasn’t life changing, in a way. The circumstances are hazy, but I do remember a synapse firing when I heard the scratchy four-chord intro to the song and hearing Dave Grohl’s drums detonate the most iconic power chord riff of the last three decades. I more or less wore out my cassette copy of Nirvana‘s Nevermind by 1994 or so, by which point I had trade up to CDs, one of many format-swapping decisions I’d make in my lifetime. It was one of the albums that all of my friends could agree on, a populist choice for mixed crowds that disputed Offspring over Pantera. We could agree on Nirvana though—I couldn’t tell you how many times in junior high I spun “Smells Like Teen Spirit” in my bedroom or at friends’ houses or on my walkman. It consumed my attention.

“Smells Like Teen Spirit” wasn’t so much life changing as universe-changing. The runaway success of the song—inevitable considering the hugeness of its hooks—led to an orgy of major label cash being thrown at unmarketable bands with guitars (raise your hand if you remember Surgery or Steel Pole Bathtub or Moonpools and Caterpillars). It also led to the rise of post-grunge copycats like Bush, who got the formula down while showing off male-model good looks that made angst seem sexy in a misunderstood, apathetic sort of way. You can attribute a lot of things to Nirvana’s rise, to the point that “Teen Spirit”—mockingly named after a cornball series of deodorant commercials—became a Rorschach test for navelgazing rock historians. It was, depending on your vantage point, the voice of a generation, the end of a period of schlock-rock excess and misogyny, the second coming of punk or the catalyst for a new era of alternative rock dominating the cultural zeitgeist. That last one definitely happened.

It’s easy to overstate the importance of Nirvana—at least at the time. “Smells Like Teen Spirit” hit number one on the Billboard Modern Rock chart for just one week: The week of November 23, 1991. By comparison, Elvis Costello’s “The Other Side of Summer” lasted four weeks at the top; The Psychedelic Furs’ “Until She Comes” made it two weeks; Robyn Hitchcock’s “So You Think You’re In Love” cruised for five weeks that I sure as hell don’t remember (I was 10, though, so…); and R.E.M.’s “Losing My Religion” dominated the chart with a triumphant eight-week peak. In fact, “Losing My Religion,” until Nirvana crept in, would have been the biggest alt-rock song of the year, and probably still was on some level. But Nirvana’s arrival was significant for symbolic reasons. And it has nothing to do with Michael Jackson.

Look back at all of the artists that were occupying most of the top spot on the Modern Rock chart: Robyn Hitchcock, Elvis Costello, Psychedelic Furs, R.E.M., and while we’re at it, Siouxsie and the Banshees, U2 and Big Audio Dynamite. I don’t know about you, but I don’t think of the ’90s when I see this list of bands. I think ’80s. And yeah, Nirvana released Bleach in 1989, but nobody was paying attention, least of all terrestrial radio programmers that didn’t have an Eastern Philosophy class to catch after spinning some deep cuts. So while there are arguments for what “Smells Like Teen Spirit” did and didn’t do, it had one more symbolic role in terms of alternative culture: It finally signaled an end to the ’80s.

By fall of 1991, the Modern Rock charts, later changed to the Alternative Songs chart, had been running for three years and had, for the most part, reflected a piece of the pop music landscape that every other chart more or less neglected. Alternative radio was the result of college rock playlists beginning to find a mainstream audience, and as such there were actually a lot more surprises in the early days. That’s maybe something that the rise of bands such as Nirvana and Pearl Jam ruined—and definitely the Red Hot Chili Peppers, boy did they make radio significantly more unpleasant in the last 25 years—but while radio playlists became formulaic over time, it’s not as if they weren’t cluttered with utterly random and sometimes head-scratching “hits” that our collective memory has seemingly erased, due either to Mandela Effect or just the general ephemerality of making radio hits.

Remember This Picture’s “Naked Rain”? Of course you don’t. The Bath, UK band released only two albums, and this was their biggest hit, reaching number 12 on the chart the week that “Smells Like Teen Spirit” hit number one. And as early ’90s Britpop also-rans go, it’s not bad, borrowing liberally from the likes of U2 and James for a high energy bit of neo-psych pop. But how about The Shamen? No, you don’t remember them, either, but “Move Any Mountain” hit number six this week, their 1990 album En-Tact apparently proving early ’90s acid house had some staying power on the college rock charts. They never really crashed mainstream alternative with much impact though, their beat-heavy rave pop arriving a few years too early. It’d be another five years before The Prodigy’s “Firestarter,” and even by then “Move Any Mountain” would probably sound quaint.

OK, but how about The Golden Palominos? Originally a kind of supergroup formed in the wake of the no wave era, The Golden Palominos featured John Zorn, Arto Lindsay, Bill Laswell, Fred Frith and Bernie Worrell—a who’s who of musicians that broke ground not just for genre but for actually making us question what the fuck music actually was, anyway. Put those musicians in a room and what’s going to come out isn’t going to end up on any goddamn chart I know of. Well, except this one time in 1991 when R.E.M.’s Michael Stipe sang on “Alive and Living Now,” and well, it sounded like an R.E.M. song. “Losing My Religion” drop off the playlist? No problem! Stipe’s got you covered.

By late 1991, however, it wasn’t R.E.M. that was dominating the airwaves. It was U2. Their album Achtung Baby was a juggernaut, selling more than 10 million copies worldwide and justifiably so—it’s not the band’s last great record (come at me Zooropa naysayers), but it’s the last one to feel important. For the next several years, Bono would don a variety of alter egos (see: Mr. MacPhisto) and prank call the White House on their Zoo TV tour, beginning every night with a combination of “Zoo Station” (the album’s opener) and “The Fly,” which dropped from number one down to number eight after Nirvana captured the airplay flag. Yet “Mysterious Ways” was already on the ascent, hitting number three before immediately taking the number one spot the next week.

The remarkable thing about ’90s-era U2 was that they changed with the times, embracing electronic and industrial production aesthetics and showing off more of a sense of humor and irony than the painfully earnest Rattle & Hum would have you believe. Did I mention they prank called the White House?! Achtung Baby was cutting—wait for it—edge. Just ahead of “Mysterious Ways,” though, was another song by a band whose identity has continued to morph through the ages: Primal Scream’s “Movin’ on Up.” A pulsing acid house gospel number, “Movin’ On Up” would be one of many songs in the British alt oeuvre to juxtapose spiritual joy with the euphoria of drugs, and were this weekly top 20 counted down live, Casey Kasem-style, there’d likely be some cognitive dissonance were it heard next to Nirvana’s chunky chords and sardonic disillusionment. Not necessarily so a few tracks up from Blur’s “There’s No Other Way,” which was maybe the last time the Britpop princes sounded so baggy.

If there was one ’80s-era band that was inescapable in the ’90s, though, it was the Red Hot Chili Peppers. For while Nirvana is maybe the first thing a lot of us think of when we hear “alternative,” the Chili Peppers are almost certainly what record label executives see as most appealing to an “alternative” demographic: Handsome in a damaged way, open and comfortable about their chauvinistic sexuality, naked most of the time and just weird enough to be accepted in the suburbs. Sure, they paid their dues (nobody actually listened to Freaky Styley), but “Give It Away” changed all that with some awkwardly faux-sexual scat-raps and a silver-painted Burning-Man-lite video with shots of Anthony Kiedis upskirt. It was a huge hit, and understandably so. It’s also terrible; Flea can slap him some bass, but bass slap alone can’t make up for the worst vocalist in mainstream rock in the 20th century. Rather than reading “Teen Spirit”‘s tea leaves about the future of ’90s rock innovation, we should have heeded the warning of “Give It Away”—no matter how much better things get, there’s always going to be another fucking Red Hot Chili Peppers song just around the corner.