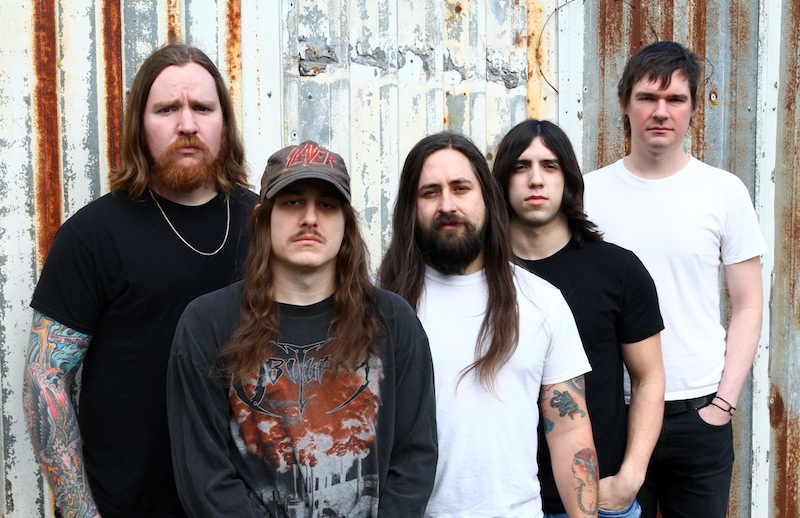 “I’m in a band called Power Trip. I think, on the surface, it demands some kind of political stance.”

Riley Gale is relaxed right now. He’s dog-sitting at his girlfriend’s apartment in Dallas, “just being a fuckin’ bum, hanging out.” The Power Trip vocalist’s friendly, casual demeanor stands in stark contrast to the music he makes with his band, a fusion of thrash metal and hardcore that nods to old-school innovators such as Slayer and Discharge, while offering an innovative take on songwriting and a renewed intensity—one that feels particularly cathartic in the context of a global climate of authoritarian control, hate-mongering and abuses against human rights. It’s also the kind of catharsis that confronts those ills head on.

Power Trip’s new album, Nightmare Logic (due out next week via Southern Lord), is a half-hour-long molotov cocktail being lobbed toward a creeping fascist state. Yet like albums by many of the bands that have influenced Power Trip, it balances that sobering and sociological outlook with elements of vintage metal aesthetics, namely horror movie imagery (sample lyric from the title track: “The slumber of reasons gives birth to all demons/A new battle takes form“). But it’s more complicated than that, even. “Waiting Around to Die” is a kind of response song to Townes Van Zandt’s track of the same name, but turns around its central theme to ultimately send the message that life, however fraught, is worth living. The album also contains some of the most fascinating production techniques ever used on any of the band’s recordings, including an introductory series of explosions and various ambient backing elements, courtesy of producer Arthur Rizk (Prurient, Sumerlands).

“Arthur does a lot of stuff with noise—he does a lot of noise projects and does a lot of crazy audio hellscapes,” Gale says in a phone interview. “So I wanted some of that stuff injected into the songs.”

Gale, guitarists Blake Ibanez and Nick Stewart, drummer Chris Ulsh and bassist Chris Whetzel are about to embark on a hectic tour schedule for the next couple months. Ahead of those dates and the new album’s release, Gale spoke to Treble about fighting your way through a nightmare, confronting poisonous ideologies and the importance of having a good time. 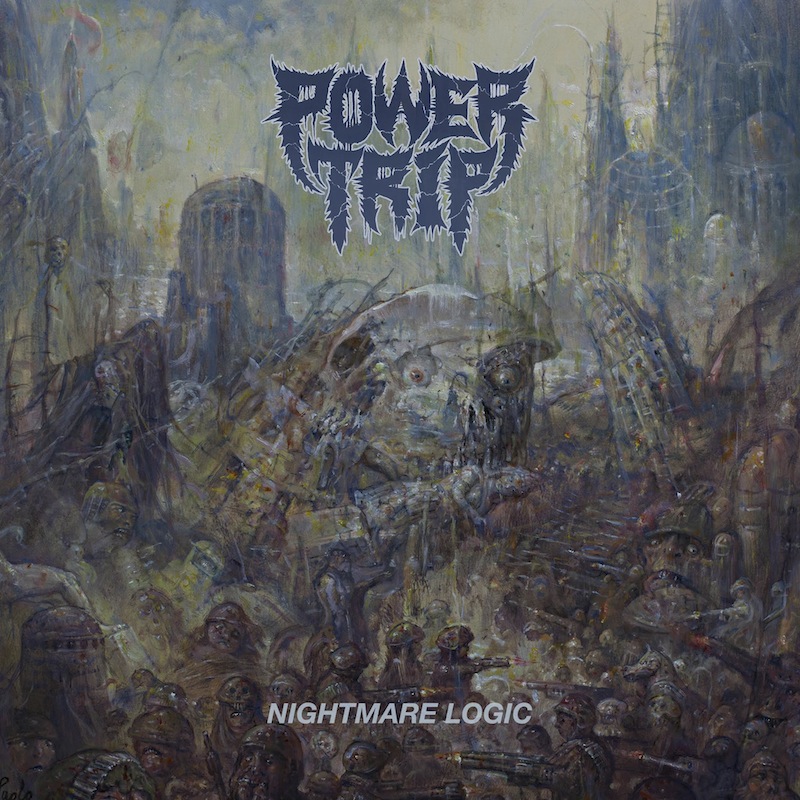 Treble: Nightmare Logic sounds very much like a Power Trip album, but there are some pretty significant differences between this and 2013’s Manifest Decimation. What did you aim to do differently this time?

Riley Gale: I took a lot more time to work on the lyrics and stuff. I think anybody who goes in and does their first LP would go back and say, “oh, I wish we could have done this, or we could have done this.” People say stuff like that all the time. And if you know the first album in and out and then see us live, there’s little tweaks to the songs. Like in the vocal pattern or a little something on the drums. I think that was just the lack of experience that we had. Chris, our drummer, was the only one of us who had recorded a full-length before. Blake and I had never put ourselves up to that task before. It was a very hard thing to do, and we learned a lot. This time around we knew more of what we wanted. We took our time a little more. We pushed our limits in terms of trying to stretching ourselves creatively. There were a couple songs where I rewrote the lyrics or vocal patterns four or five or six times. Blake might have had a different interpretation of the song than I had. And then when I sat down and listened to the song I heard it a different way. But we were better about actually fleshing out the ideas and trying them out in the studios. Manifest was more of a we’re-under-the-gun let’s get this done kind of thing. This one is a lot more focused and lot tighter, vocally, musically, and even lyrically.

Treble: Are you happier with how this one turned out?

RG: I definitely think this album is better than the last one. Honestly we all love pop music in various forms, so we’re essentially trying to write something that’ll get stuck in your head, whether it’s a riff or a chorus. So I think we did a much better job this time of making an album that we would want to listen to. I think if I wasn’t in the band and I was asked to compare the two albums, I would probably be able to come to the same conclusion as I’m giving you now. I can tell that the vocals and the drums and everything are much tighter on this album than on the last one. I think everyone is happy with how it turned out. We worked really hard to create something that was unique to us, and I think we pulled it off pretty well.

Treble: It seems hard to separate the term “nightmare logic” with the dire domestic political situation. To what degree is it a response to the volatility that’s happening in the U.S. and the world on a broader scale?

RG: You know, the whole idea for Nightmare Logic was that I took it from a subset of horror movies. It’s a broad term. People use it for any movie that blurs the lines between reality and a nightmare. So anything David Lynch did. Suspiria’s kind of considered a classic nightmare logic kind of movie. But people also use it to describe Nightmare on Elm Street. In a log of movies, if there’s a protagonist, they end up using this nightmare logic against their enemy. In Nightmare on Elm Street, they end up flipping the script on Freddie Krueger in their dreams. The reality we’re facing is kind of a waking nightmare, and this album is kind of me fleshing out those ideas and the struggle to navigate the living nightmare that we’re in and how to adapt to it. And ultimately conquer it for the better than just a scorched earth kind of thing. The phrase ties in really closely to Manifest Decimation in that, if you want to see things change you have to participate. You can’t wait for it to happen.

In a nightmare you can run and run and run, if you want, from the monster that’s chasing you if you want. If you really want to make a difference you really have to stand your ground. Sometimes it means having to embrace the lesser tactics that you would want to. Sometimes it means physically shoving back in certain instances against certain kinds of people or oppression. A lot of it is me trying to navigate this unprecedented political landscape we’re seeing. This is all stuff I wrote before a guy like Trump was even considered a viable candidate. So now it’s just a kind of validation for what’s going on. Watching these past couple weeks go by and every day is something new and insane that I feel violates human rights at a pretty basic level. I just think that shows I was on the right path with what I was writing about.

Treble: Metal has always been political in some respects, particularly in the ’80s, though some fans or critics might argue against politics’ role in the music. Is it important for you for the music to be an outlet for social commentary?

RG: I guess it depends on the band you’re talking about. Me, I didn’t start this band to do some kind of escapist fantasy. I may bring up some imagery of axes and swords and battles, but it’s all symbolic to something bigger and more all-encompassing. More universal than just fighting for honor or whatever the fuck people sing about. Growing up into punk, I always saw music as a political weapon, and for me, seeing some of the more political passiveness that metal bands want to put out there is frustrating.

When you’re bigger you have an opportunity to influence people and I think there’s a point where you have to stop and ask yourself what I want to put out there, whether it’s physical or symbolic. Touring with Lamb of God, you could tell there were sometimes people with questionable politics coming to the shows. One time I saw a guy buying $100 worth of Anthrax merch and had SS bolts tattooed on his neck and a Hitler and the Third Reich tour t-shirt…and then on the back was mock tour dates of countries he had invaded. And I wanted to go up to this guy and say “what the fuck are you doing? Do you even realize that three quarters of Anthrax are Jewish?” I’m not going to stand there and tell you that racism or homophobia is OK. If you fit under one of those umbrellas, I don’t want you listening to my band. Come with an open mind.

Treble Power Trip is very much rooted in metal and hardcore, but you’ve toured with a broad range of bands, including Merchandise and Deafheaven. And you’ll be playing shows with Destruction Unit too. Is it a goal, of sorts, to participate in diverse live shows?

RG: You know, I think it’s one thing to surround yourself with people who have similar musical ideas. And one reason we do that is we get along with those people—they’re awesome people. But we want to show you can have the same ideas and the same progressive stances and be very different sonically. And me, personally, I’ve been doing enough shows where I like the diversity. I don’t mind a metal package of four bands, but I also thought it was awesome that Lamb of God and Anthrax took along Deafheaven because it changed things up a bit.

Treble: For how confrontational and outspoken a band Power Trip is, the music is ultimately a lot of fun. I don’t imagine you’d be doing this if it wasn’t.

RG: I think, if anything, the band is sort of a testament to being able to write stuff that is fun to listen to but still doesn’t lack substance. I try to put the substance first but still make it fun. Our idea is to be a fun show. When people come to a show, I want them to let go and not have to worry about things. Our shows are a form of escape. If people want to find more, it’s there. But if they don’t, that’s OK too. I’m not here to force you to think. As long as you’ve got a good head on your shoulders, I don’t really mind.