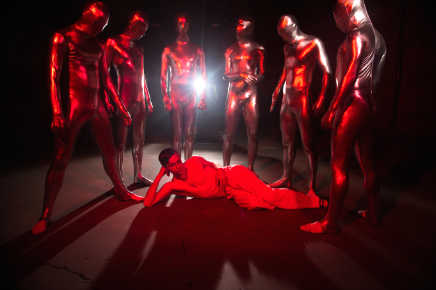 Mike Hadreas, a.k.a. Perfume Genius has been making some strange and awesome videos for songs from his upcoming album Too Bright. The latest, for “Grid,” isn’t quite as intense as the video for “Queen,” but it’s certainly a trip. The video finds Hadreas dressed in white, sitting in a circle of people wearing tight, silver suits. They writhe and dance and push and pull him. It’s hard to know what’s really going on — some sort of interpretive dance, anyhow. But it’s a sight to see, for sure. Watch the clip, directed by Charlotte Rutherford, below.

Too Bright is out Sept. 23, via Matador.