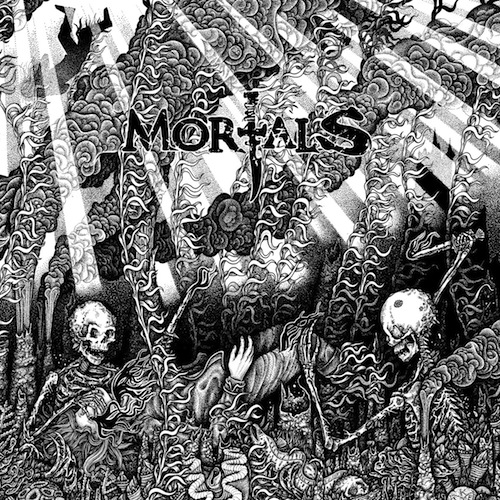 Within the first few seconds of the opening title track to their Relapse Records debut Cursed to See the Future, Brooklyn’s Mortals draw a parallel to Darkthrone’s Transilvanian Hunger. There’s an insistent rush of intense black metal malice, paired with an accessibility that made that particular album stand out as a classic among the second-wave Renaissance. And 20 years down the line, that streamlined and direct form of black metal still packs a punch when done well. But Mortals aren’t the type of band to settle into one comfortable spot and camp out for a while; “View From a Tower” promises a more epic journey, and beyond its first minute, the band soon incorporates the blackened thrash of Triptykon, a melodic post-punk bridge, and ultimately a soaring and progressive turn back into black metal that suddenly feels a lot less straightforward, and for that matter, a lot more interesting.

At this point it should probably be pretty clear that Mortals aren’t actually that similar to 1994-era Darkthrone at all. There are quite a few reasons for that, one being their use of much better technology, and another being the fact that they’re American. They’re also all women; this is primarily notable for the fact that they also moonlight as a Slayer cover band called Slaywhore — worth mentioning on pun hilarity alone. Much more notable is Lesley Wolf’s blood-curdling growl, which is one of the more impressive I’ve heard in a metal band of late.

On Cursed to See the Future, Mortals present themselves not so much as a traditional black metal  — or doom, or thrash — band, but rather one with a lot of ideas and few perimeters to fence them in. They pull off a relentlessly sludgy pummel on “The Summoning,” impressively dense doom metal on “Epocryphal Gloom,” an awesome Eyehategod-style swing on “Devilspell,” and back to a more straightforward blast-beat attack on “Series of Decay.” But no matter how Mortals introduce each song, it’s just one point on a much more thrilling and unpredictable collision course of sounds. And by the time they reach the closing — and kinda catchy! — “Anchored In Time,” they’ve covered a lot of ground, having left their mark on several prominent corners of the metal sphere. They do it heavy, they do it loud, and with just the right amount of reverence for melody and hooks. Mortals seems too humble a name for a band that aims for something so huge.