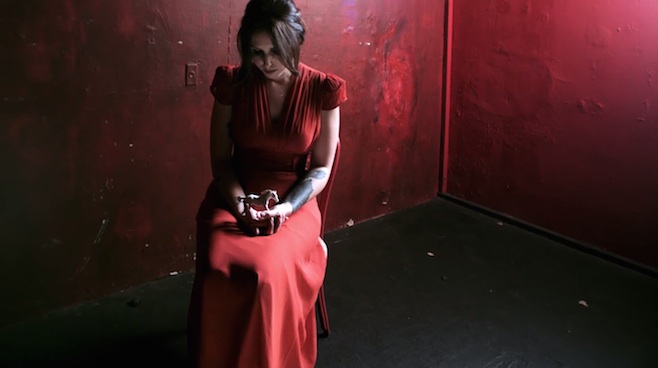 Chelsea Wolfe has just shared a new video for “The Waves Have Come,” an epic standout from her 2013 album Pain Is Beauty. Much like her previous clip for “Feral Love,” it’s a powerful and beautiful clip, featuring intimate shots of Wolfe in a dark room, interspersed with images of alternately beautiful and destructive things — nature, home movies, bridges exploding, etc. It’s an excerpt from her 52-minute Lone film, directed by Mark Pellington (Pearl Jam, Nine Inch Nails).

V Magazine premiered the video, which contained this statement from Wolfe: “Most of this video is footage from the first time Mark and I shot together—he had built this dark room full of green ivy and it was just me, the dress from the album cover, a few lights, and him. It was the first time I realized what a director really is. Suddenly he was shouting, guiding me with instructions, emotions, telling me to act as if everything I was singing about—disaster and the loss of life and love—that it was all inside of me and at the same time to act as an observer of these things. He cut it together with found footage of families, intense nature and destruction and created this cathartic journey through it all.”