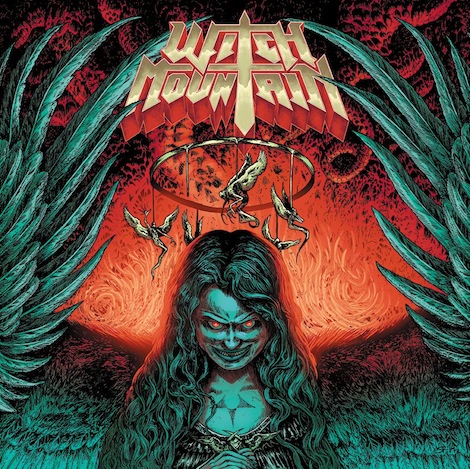 From its opening riff, paced at roughly the same speed as organic decay, and impossibly deep-sounding snare thumps, Witch Mountain‘s Mobile of Angels sounds like a heavy metal relic of decades past. The guitar tone is rich and powerful, with an approachably vintage warmth you might hear in classic era Saint Vitus or Pentagram albums. The music doesn’t go anywhere in a particular hurry, finds its groove in blues riffs, and all shredding is kept to a fairly modest minimum. If not for the clarity and versatility of frontwoman Uta Plotkin’s vocals — which range from a bluesy moan to an eerily grotesque hiss in just “Can’t Settle” alone — it would be pretty easy to accept Mobile of Angels as a long-lost ’80s-era reissue from the Peaceville or SST archives, albeit one that’s been pretty impeccably remastered.

When it comes to doom metal, sounding old, traditional or “classic” comes with the territory. Rare is the doom metal band that steps out from behind the elders’ wall of sleep (or Sleep) and crafts something wholly new sounding out of elements that date back long enough that The Beatles were actually still together, if just barely. There are exceptions; Pallbearer took their sophomore album Foundations of Burden in an impressive progressive direction earlier this year, while UK outfit Electric Wizard continue to consume enough substances to make any of their creations seem continually askew when lined up with the genre’s standard bearers. Adherence to vintage sounds isn’t a problem for doom metal, however; the scariest ghost stories are the ones that have been passed down for generations, and thus the most chilling sounds in metal are still often those that feel as if they were born of another era.

Portland’s Witch Mountain are some of the most talented necromancers of the genre, even if Plotkin’s impending departure means they’re unlikely to continue operating in the same capacity as they have for much longer. As a final bow, however, Mobile of Angels is the band at their most soulful and glorious. Their third album in four years, it culminates a fertile period of productivity with five slow-moving, yet immediately captivating epics. Well, they’re not all epics, exactly; the title track is a mesmerizing three minutes and 30 seconds of distorted organ chords, vocal harmonies and spoken word chants that befit the cooking of a proper witch’s brew.

The other four tracks are alternately gritty and sublime seven-minute altars of old-school doom that keep the sludgy tempos and ringing power chords fresh by imbuing them with the kind of grace that neither Wino nor Reagers cared much for (with no disrespect to either badass, of course). Guitarist Rob Wrong’s riff in first track “Psycho Animundi” bears an almost immediate resemblance to “Dragonaut,” which is by no means a bad start, but it’s not really until Plotkin reveals the full scope of her vocal range that the song transforms from good to incredible. There’s an added touch of sultry blues in “Can’t Settle,” and in final track “The Shape That Truth Takes,” an ethereal, dirge-like ambiance that’s not really doom metal at all, outside of the darkness it contains. And whether they’re turning up the fuzz or lingering on a riff that would seemingly summon the Grim Reaper himself, each element is tackled with a refined elegance. With Plotkin soon to carve out her own path outside of the band, it’s hard to know how a new vocalist might handle grasping such privileged reins, but as Mobile of Angels stands, Witch Mountain have done doom metal’s legacy proud.