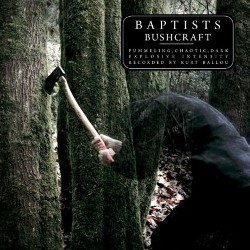 Hydrate. Do a few stretches. Run in place. Take a few deep breaths. Focus. Stay centered. And maybe even say a prayer or two. Because once Canadian hardcore troupe Baptists kick off the relentless hardcore assault of their new album Bushcraft, they don’t stop. There are scant few drops in tempo, the volume never eases, and the listener gets no breaks. There’s no turning back.

This, however, is a good thing for those who like their metallic hardcore as punishing and pulverizing as possible. Bushcraft, the band’s first album for reliable crust purveyors Southern Lord, runs only 10 seconds over the 30 minute mark, but those 30 minutes are choked to the gills with d-beat blasts, raw surges of power chords, and a vocalist — Andrew Drury — whose throaty growls could strip paint off the walls. It should probably come as no surprise that the album was recorded by Converge’s Kurt Ballou, who has an almost superhuman talent from being able to get the ugliest crust sounds imaginable out of the bands he works with, and that definitely holds true here.

There’s only a slight warning at the onset of Bushcraft that the proceedings are going to get furiously intense, and with little in the way of letting up. Some feedback and doom rumble introduce opening track “Betterment,” but it’s a fleeting moment of pause before the full-frontal assault opens up. There are scratchy shards of guitar in “Think Tank Breed,” ominous string-bending riffs in “Still Melt,” sludgy churn in the epic (five-minute-long!) “Soiled Roots,” and on closing track “Abandon,” a menacing bass breakdown that sets up an intense coda that sends the album out with a heart-racing, roaring climax.

Baptists display more than a few aesthetic similarities to Converge, which makes perfect sense given Ballou’s involvement on the album. And as far as hardcore heroes go, you can scarcely do better than Converge. There’s still lots of room for growth for Baptists to ascend to that level, but they’re on the right track. Bushcraft is an absolute beast of a hardcore album, but one that listeners would be best advised not to go into unprepared.

Enabler – All Hail the Void